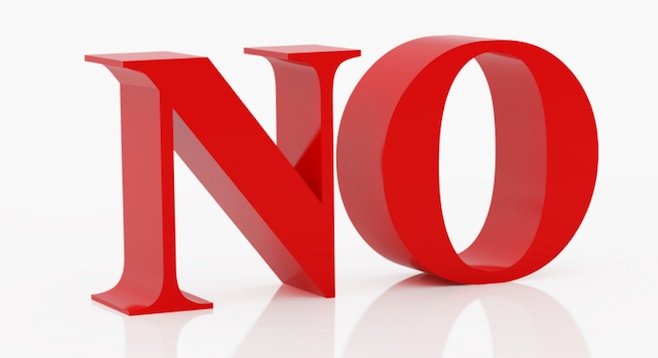 When I tell friends I don’t “do” Christmas in the traditional gift-exchange sense, the most common reaction is, “How do you get away with that?” They never ask why — they just want to know how. Many express their own desire to do the same thing — to have what would amount to “another Thanksgiving” with family and friends who share gratitude over a meal instead of the stress and obligation that comes with fretting over who to get what and how much money they can afford to spend on what tends to be stuff no one really needs.

I’ve become so comfortable expressing my thoughts honestly and directly that it’s easy for me to forget how hard it was the first time. I forget the bubble of anxiety that swelled in my belly as I worked up the courage to be honest with my family about my holiday preferences. I forget the bitter taste of fear that was in the back of my mouth when I spoke words I knew someone wouldn’t like but had decided I must say.

For a long time, saying “no” never seemed like an option. And not only to widely accepted social conventions, but also to stupid little things, like turning down an invitation to a party or denying someone’s requests for a favor. Saying “no” made me feel bad. I didn’t want to be the cause of anyone’s disappointment; it was too much to bear. But saying “yes” all the time was just as burdensome. Rather than say “no” and feel bad, I’d say “yes” and end up feeling resentment toward the person who put me in a position where saying “no” was uncomfortable.

I started to get fed up with myself for prioritizing “being liked by others” above everything else. I used to get angry at people for “using” or “manipulating” me. But then I realized I had no one to blame but myself. Each time I said “yes” and didn’t mean it, I was giving up my right to be angry. For example, if a friend asked me for a ride and I was busy but still said “yes,” that friend wasn’t “using” me — she was just asking for a ride. And I said “yes.”

If I was unwilling to adjust my schedule to make myself available for her at a certain time, the onus was on me to say so. A friend would understand and figure out another way home. It’s like that old saying: “Never make excuses. Your friends don’t need them and your enemies won’t believe them.”

Teaching myself to say “no” was like stepping out of a cave and into the sunshine. At first, the light burned my eyes — but then, as my vision adjusted and I took a good look around, I was amazed that I’d been struggling so hard for so long to get around in the dark.

My friend Kimberly recently told me that one of her favorite things about our friendship is that she never feels like she has to explain herself to me, and vice versa. “I know that if you call to ask me to dinner and I say, ‘I just want to hang out at home tonight,’ you won’t feel put off,” she said. To me, this is the highest compliment. Honesty is intimacy.

I have found the best way to say “no” is to be friendly and firm. In the case of assumed family obligations, it’s never easy. In order to say “no,” I have to accept that I will be disappointing whoever is asking something of me. It was David who pointed out that some people will be disappointed no matter what I do — that whole “it’s impossible to make everyone happy all of the time” thing. But it was my mother who helped me embrace my husband’s advice, albeit it in an indirect way.

My mom comes from the “modify the behavior of others by inflicting guilt” school of Catholicism. This worked great when it came to keeping four crazy little girls in line. Over the years, Mom’s expression of disappointment became a kind of Catholic-guilt reflex.

I accepted long ago that I suffered Jack Donaghy’s plight — it will never be possible to fully please my mother. So, rather than break my bones to bend myself into her mold of the ideal daughter, I am the daughter I am. And I have never felt as close to my mom as I have since I stopped trying so hard to please her. I began to notice that Mom is, on each occasion, as delighted in one thing as she is disappointed in another. So, though she’s disappointed that I won’t be joining the family on Christmas Day, she’s thrilled that we’ll be getting together another day. And so am I.


It was only four years ago that I asked my father to understand and accept my decision to have a quiet day at home with David on Christmas instead of partaking in the family brouhaha. Though Dad said he respected my decision, the disappointment on his face was a millstone that ground my insides into guilt-infused dust. But the next year, it wasn’t so bad. And the year after that (last year), though my family continued to express their desire for my participation, they didn’t push as hard. They are becoming okay with my veering from one of their traditions to create my own. And they still love me. Better still, they love me for me. I have found sincerity in “no,” and I have found serenity in sincerity.

It all makes sense to me Barbarella. Had the same problem of saying "yes" automatically. It took years to break that self-destructive habit and I still revert back occasionally.

I read your article aloud to my partner. It sparked a discussion of the whole Christmas gifting as social obligation thing. While it wasn't a solution to our dilemmas with each other, it was a step in the right direction. Thank you.

Glad to hear it! Communication is key, in everything. Happy New Year!

Didn't you do this column last year?

Last year I did a column more about my reasoning behind not celebrating Christmas. If you need a refresher, simply click here: http://www.sandiegoreader.com/news/20... :)

Oh boy. I need to print this out and hang it on my wall.

Saying "no" is one of my main issues in life. Like you, when I agree to do something I don't want to do, I feel resentment. And yes, I have been a victim of the same Catholic-guilt reflex. But hey, if you can do it...