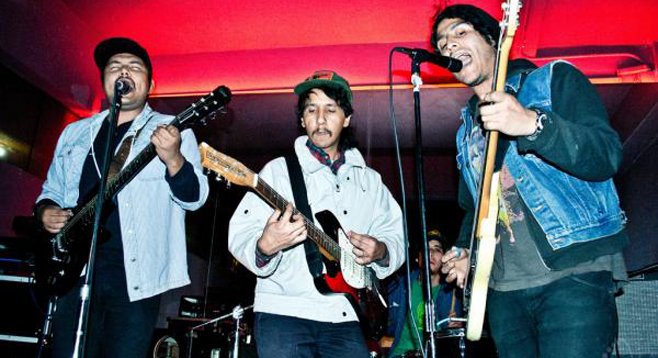 They were new last year: the San Pedro el Cortez band, home-based in Tijuana, where there is currently a resurgence of rock bands that follow different camps: shoegaze, psych, British mod, American garage. SPeC fit into none of the above and all of the above. Their approach to music mirrors my approach to cooking. I throw stuff together. No recipe. Sometimes it works, sometimes it doesn’t. But, the ride is always interesting. Likewise, San Pedro el Cortez steps outside the rock-and-roll cookbook. The elements are not unusual, but the combinations are unexpected. “Ratas,” for example, is driving acoustic guitar not unlike Neil Diamond, but minus his voice. You could almost lay the vocal track to “Cherry, Cherry” (Diamond’s 1967 hit) over “Ratas,” but instead, SPeC gives us weird Iggy Pop.

On Freemusicarchive.org, it is suggested by the band members that the source of such musical bedlam may well be their neighborhood: “Coming from the absurd, chaotic, and dirty things of the daily life creates a state of mental sickness that influences the sound we transmit.”

KCRW radio once catalogued San Pedro el Cortez as “psychedelic regional Mexican rock.” I think the word psychedelic is loosely used here to describe what is: in essence, a bizzaro mix of song styles that sound as if informed by Black Flag, blink-182, Dwight Yoakam, Roots Covenant, Deadbolt, and sources unknown. In the band’s own words from Myspace: “Taking a month to develop this concept and with very little budget we tried to give all the possible way, so [it] can be digested by the people who listen to it, considering that we do not have much with the band but yes to the idea of contributing something to a audience.” Sure, their English isn’t so good — they often sing in Spanish — but you don’t have to speak the language to enjoy SPeC. The message of rock is universal.