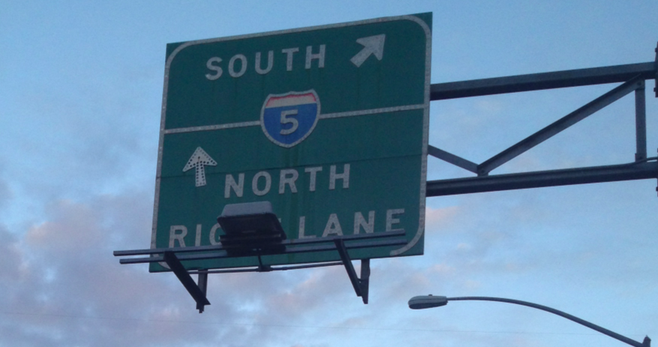 Officially known as the North Coast Corridor Project, from La Jolla Village Drive through Oceanside, SANDAG is coordinating the joint effort and funding for Caltrans’ plans.

Residents are being polled on how they currently use the I-5. After a few minutes into the survey, (paraphrased) questions included: “Do you find riding your bike safe?” and “What form of alternative transportation would you consider if the freeway were clogged?”

According to SANDAG’s Colleen Windsor, the survey is being conducted to find out what residents are willing to do during the construction phase of the freeway, which is sure to cause more traffic congestion than already experienced by commuters.

Caltrans’ Hayden Manning says they’ve already been approved to extend the existing single car-pool lane, which ends at Manchester Avenue in Cardiff, all the way through Oceanside; that construction has been planned for years and will begin once the project has been funded (which is expected in 2014).

The expansion plans for I-5 have commuters and property owners concerned. Caltrans proposed numerous options over the past few years, from doing nothing to widening the freeway 75 feet on each side and adding eight lanes (two additional lanes and two car-pool lanes on each side.)

Caltrans’ project preference, which they will be pitching to the Coastal Commission for approval in January, is the “8+4” alternative. It will not add any more lanes for general traffic, only adding one car-pool (or “managed traffic”) lane in each direction, for a total of 12 lanes.

While not as aggressive a plan (in terms of not needing to acquire as much right-of-way property as originally thought), opponents of adding more car-pool lanes point out that Caltrans, as of November 26, turned the car-pool lane on L.A.’s 110 freeway into a toll lane. More conversions of car-pool lanes into toll lanes are reportedly planned for San Bernardino and Riverside counties.

One positive effect in the plans is addressing the health of the six lagoons over which I-5 crosses. Plans call for removal of large dirt embankments built under the current freeway, which blocked the natural tidal flushing of the once-unobstructed lagoons.

The expanded I-5 project will probably not be completed until the 2020s. The project will also coordinate and expand area bus service, with major off-ramps connecting with several planned transit centers.