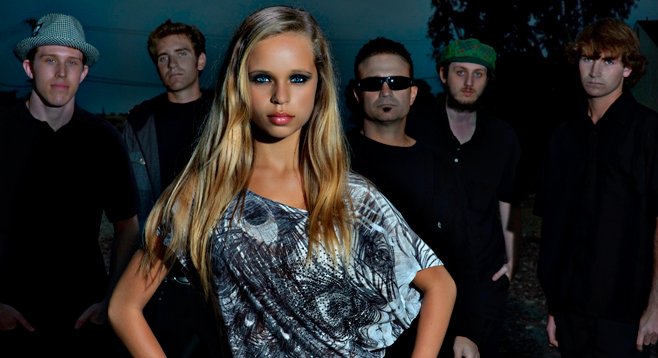 “We played the whole tour in 2007,” says Fabulous Rudies singer/founder Tom Voris. “We were the Barbecue Band. They don’t really have the Warped Tour Barbecue Band anymore. Now they have a sponsor come in and feed the bands.”

On August 17, Voris will have another distinction. That’s the day of the world premiere of Music High, a film he inspired. And as the movie’s music coordinator, he selected the 15 titles on the soundtrack.

“I got paid nothing,” he says of his input. “But I do have points. If anything big happens, that’s when the money could roll in.”

Music High, which was shot last summer at Mesa College, grew out of Voris’s friendship with San Diego–based filmmaker Mark Maine. “Music High will be Maine’s fifth movie shot in San Diego, including Hole in One and Beach Bar.

“It all started when Mark saw a TV news story by [reporter] Jack Gates on NBC,” says Voris. “It was about the high school club I founded called Punk Rock High School.”

Voris teaches history at El Camino High in Oceanside. Faced with massive cuts to music education, Voris, who has played in the Rudies for 15 years, wanted to find a way to keep music alive in high school. At the after-school club, students would jam together and talk about getting ahead in the music business.

Maine describes Music High: “It’s about a teacher who loses his funding and who gets to teach just one music class. He deals with five different bands in that class — pop, country, heavy metal, goth, and hip-hop. The class — and the school — are divided into those genres. He tries to unify the class and the school.” A battle of the bands scenario is the climax of the film.

“This is a narrative feature,” says Maine. “It’s not a documentary, and it’s not one big music video.” But there is plenty of footage of young bands who appear to be playing live. As music director, Voris selected eight tracks that the Fabulous Rudies already recorded — five originals and three covers. Those tunes are performed (lip-synced) in the movie by the Pop Squirrels.

“We appear in the movie as the backing band for the actor who is singing our music,” says Tan Sister drummer/singer Andrew Ware about his role in fleshing out the band Eight Car Pileup. “It was kind of weird because I don’t usually mime to my own music.” Ware says he doesn’t play those songs anymore. “We’ve moved on from those songs.”

Maine says he had to raise the $250,000 it took to shoot Music High. He wouldn’t disclose investors’ names. “They include some well-known heads of industry as well as friends and neighbors.” He classifies the film as “ultra-low budget.”

Or, Music High could serve as a pilot for a TV series.

“If that was the case, we could be like the house band on ‘Glee,’” says Ware.

The world premiere of Music High is at the Oceanside Film Festival (ocaf.info) at 10:05 a.m., August 17, at Grace Chapel in Oceanside.