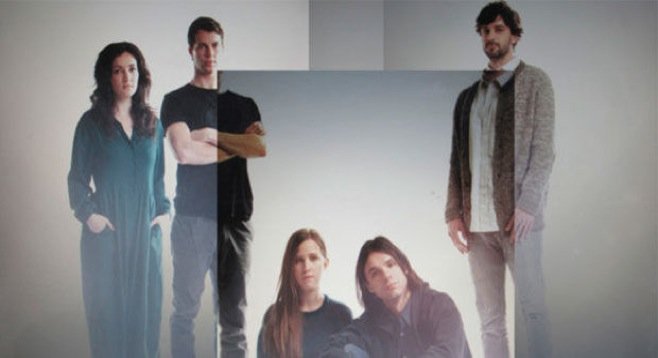 Left-handed fingerpicked electric guitar. This alone would be enough to set the Dirty Projectors apart from the spate of blue-eyed Afro-pop artists passing through indie-rock circles of late. But as the Brooklyn six-piece launched its HOB performance with a solid run of songs off its latest record, Swing Lo Magellan, bandleader David Longstreth’s unusual playing style set the tone for an engaging set, punctuated by jittery rhythms, variable time signatures, and intentionally off-key melodies. DPs could not have been more musically challenging or gratifying.

Longstreth’s elastic voice is a unique instrument, reminiscent of David Byrne’s but bending and breaking into far stranger places than the Talking Heads frontman ever dared. While captivating, it might have proven too much for 90 minutes — fortunately, his songs were interspersed with those of co-vocalist and guitarist Amber Coffman. Declaring San Diego “a rock town,” the talented former resident reached impossible high notes on soulful fan favorite “Stillness Is the Move,” then joined Longstreth for a mesmerizing dual guitar solo on “No Intention.” However, Coffman’s most lasting and powerful role may have been leading the DPs’ signature female backing vocals. The dissonant three-part harmonies were a constant presence throughout the evening, breathing jubilant life into the downtown venue, and surely sticking in everyone’s minds during their rides home.