Made in Central Luzon

“It’s the end of the night, we can give you a half order for half price,” Nancy says. 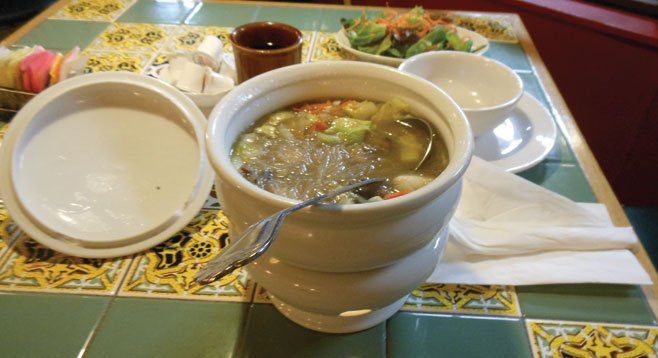 Wow. What an evening.

It started on a crowded trolley, Blue Line, heading south. This was around 8:00. Had a hankering for Filipino food, and I thought I’d get off at 8th Street, National City.

A guy climbs aboard at 12th and Imperial with his bike. Classy green Monsoon with seat suspension.

“Oh, man, I love that adobo,” he says. “I was over there in the Philippines, traveling around, about 12 years ago.” 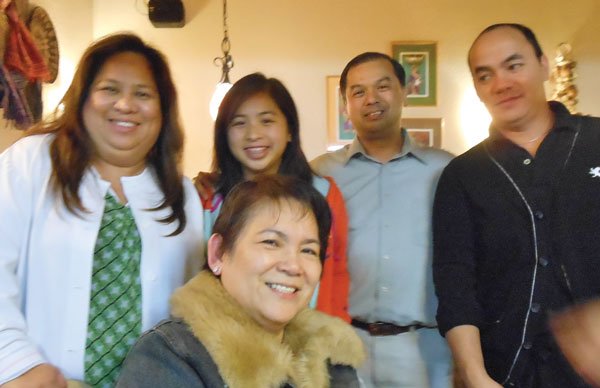 He doesn’t, but Manuel, the Mexican-American guy sitting next to him, does.

So we get off at 24th Street and jump into his van.

Trouble is, they’re closed. But I step out of the van right beside a restaurant called Villa Manila. The lights are on. The sign is flipped to “OPEN.”

I thank Manuel and head inside. Hmm…not many people here. Lone lady on the left — she’s wearing a denim jacket with a fur collar — plays solitaire on her iPad. Across the aisle, a Filipino family shares some kind of soup in one white china bowl set on top of another white china bowl that has a burning candle in it. Looks interesting.

The waiter, Sonny, guides me to a table near a wall draped with shawls and woven plates. They look like they’re straight out of back-country Philippines.

“They are made in central Luzon, where my family is from,” says the lady with the fur collar. Nancy Mendoza. “Pampanga, the first Spanish province in the Philippines…it goes back to 1571. It’s the culinary capital.”

Turns out Nancy’s the owner.

It also turns out they’re closing at 9:00. Better step on the gas.

First up, I ask the family at the other table what that delicious-smelling soup is that they’re eating.

“Sotanghon con caldo,” says the father, Harwell. “We come here for this. It’s the noodles. It smells like the Philippines. Like home.” 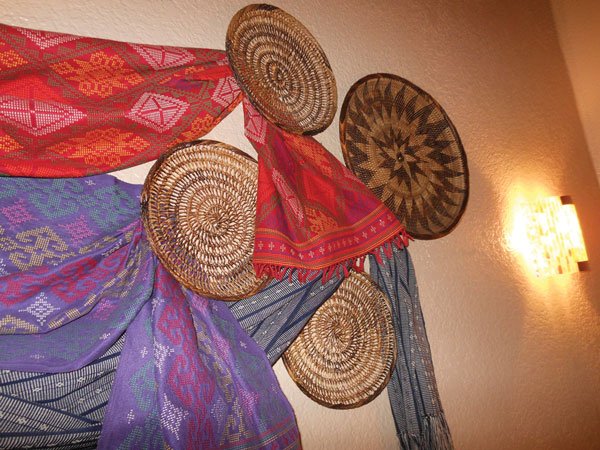 “It’s the end of the night, we can give you a half order for half price,” Nancy says. The soup’s basically onion broth with transparent noodles made from mung beans, plus cabbage, black mushroom, shrimp, chicken, and pork.

In ten minutes, Sonny arrives with the double bowl. The soup steams with glassy noodles, black ’shrooms, bright green veggies, and those shrimp and pieces of pork. The taste has a basic vinegar drum-beat, but over that, all these flavors drift in and out like dreams. Lord. Wish I knew more about Filipino cooking.

Also, it has that heater candle below, which is great, because the more the heat evaporates the liquids, the richer the soup becomes.

And now I go a little crazy — this is gonna about bust the bank. But I can’t resist asking for the #2 Pinoy Combo plate ($8.95). I like the look of the shrimp-pinkened “bagoong” rice in the illustration, and the promise of pork adobo, which I love. It also comes with something called pinakbet.

The combo comes with a clear soup — yeah, more soup, but that’s okay — and a salad with a tantalizingly sweet dressing. I can’t quite nail it.

I know how Filipinos like to mix up those three elements: sweet, sour, and salty.

The adobo is delish. It’s pork (you can have chicken) in vinegar, soy, garlic, onions, bay leaf, and peppercorns. It’s a rich stew.

But, really, the nicest surprise is the pinakbet. “It’s the Philippines’ version of chop suey,” Nancy says. “The main thing we look for, what we have to have, is the ampalaya, bitter gourd. Everything else depends on it. The string beans, eggplant, squash, shrimp, pork…see? There’s a piece. Ampalaya! Taste it.”

I spot the curly little monster and — ka-pow! It’s b-b-bitter. Not spicy hot. Bitter. But when I load my mouth with the squash and beans and soup, the ampalaya gives them…meaning. Like hot sauce does to your burrito.

I realize what’s different here: most other Filipino places I’ve been to are buffet-style, warming-plate affairs. This one, they make it for you fresh to order.

Nancy says, “My mom taught me to cook. But then I married into a family of restaurateurs — Max’s, a big Filipino fried-chicken chain that’s also in California. This used to be one of them. After running it for 12 years, my husband died. I had to give up the franchise. So I changed it to Villa Manila. Now it’s me, and my kind of Central Luzon cooking.”

“There are 7100 islands,” Nancy says. “We do have a lot of different cooking styles.”

Oh, man. Yakking, eating so much, time’s been flying. I have to pack up pretty much half of everything. Because, hey, it’s way past 9:30.

Nancy locks the doors. She sets the alarm, and we all leave together.

She ends up driving me the half-dozen blocks to the 8th Street trolley. One evening, two rides! How can I be objective? But trust me, she’s a gem. ■