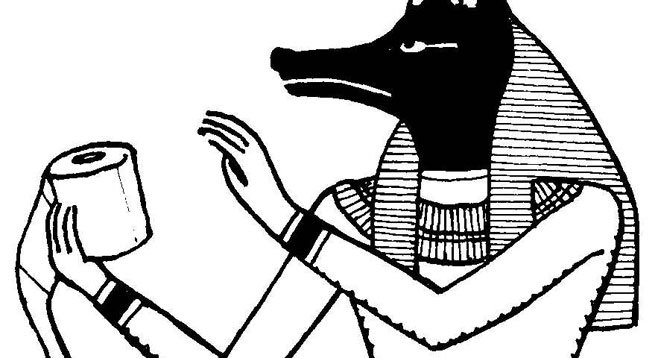 While enthroned on a porcelain bus, in my man-reading-cave, perusing How the Great Pyramid Was Built, some of my deepest dredging of thought brought up a question. Though virtually no pharaoh mummy has been found in a pyramid, King Tut’s burial site provided in-depth evidence that he was provided with everything (except a pyramid) to embellish his hereafter life, including jewels, a bed, food, chariot, art pieces, and an assortment of other day-to-day living necessities. Butt, I’ve never read or heard from Dr. Haw-ass, Egypt’s penultimate expert and over-exposed television icon, or anyone else that a crapper was provided. Ass-uming that even pharaoh gods had to take a dump from time to time, this is mystifying. I’ve read in de-tail about Egyptian mummification, but nowhere is it suggested that the deceased were sewn shut in their netherlands (no insult intended to my Dutch friends). So the question begs to be answered, why was such a necessary functional piece never mentioned? 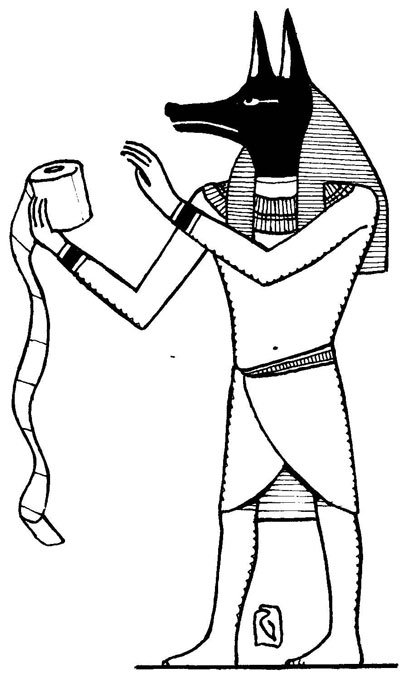 I’m sure the dapper publicity hound Dr. Hawass isn’t eager to talk about pharaohs’ bowels, but the people of ancient Egypt were not so shy. Egyptian pyramids do have bathroom niches in them. In fact, among the piles of gold and jewels and cool stuff in Tut’s grave goods was a limestone toilet seat. I don’t think it toured the world on exhibit with his famous gold Tutface, though. It’s a horseshoe-shaped slab, with an outer lip on the curved portion and a keyhole-shaped piece cut out, up the midline of the thing, from the flat front edge to a point near the top of the horseshoe curve. No gold, no jewels, just a simply designed basic necessity that will get the job done.

One of my very tall friends carries a fairly large knife with him on a regular basis. I asked him if it was legal to carry a knife that large and he replied with, “As long as the blade is shorter than your pinky, it’s legal.” Is this real? If so, how is this fair? What if you have li’l ol’ tiny hands or no pinky at all? What if you’re the tallest person in the world, could you carry a bowie knife?

— Friend of Knife Guy, via email

Your question and his answer are vague enough that I’ll have to give you the long view of things, then let you go back and confront Knife Guy with the results. You’re right, no state or local law uses pinkie length as a legal measure. And in using that shorthand, your friend is probably way misled about what the law actually says. So here’s what California’s Penal Code says about knives:

Two inches seems to be the critical length when we’re talking knife blades. Knife laws generally don’t apply to slicers shorter than two inches. In the non-fixed-blade category, totally illegal are switchblades or gravity blades over two inches, those folding knives that can be snapped opened with a wrist flick or a button. Can’t have them on you, in your car, home, wherever. There’s some potential confusion here, since there are folding blades called assisted-open knives that are legal to carry — pocket knives that can be opened with one hand but require the carrier to overcome some built-in blade resistance to being opened. Anybody who’s watched those knife shows on TV knows there are millions of subtle variations on all styles of knives, and sometimes it’s a tough call about your blade being an assisted-open instrument or not.

The second biggest chunk of the law applies to fixed-blade stabbing devices (including ice picks and the like) of any length — “dirks” or “daggers,” as they’re called. If you’re packing a dagger, it must not be concealed. Everyone coming at you must be able to see you’ve got a toad-stabber at hand. You also can’t possess or sell a blade disguised as something else: cane, umbrella, lipstick, pen. No possession of blades not detectable by metal scanners; no fixed-blades longer than 2 inches on school grounds and no type of blade 2-1/2 inches or longer on a college or university campus. No throwing knives in public parks. And no brandishing a knife of any kind in a menacing manner.

Be aware that knife laws change when you move between cities and counties and states. San Diego follows state law with no local peculiarities. But if you’re heading for L.A., don’t bother to bring any blade longer than three inches. That’s their cut-off point. So if your friend says everything’s copacetic if a knife is shorter than your pinkie, but state law says it’s only okay if it’s under two inches, I guess by your friend’s reasoning only babies can carry knives with impunity.