Jewels signify the power of wisdom to dispel bad thinking, suffering, and ignorance. 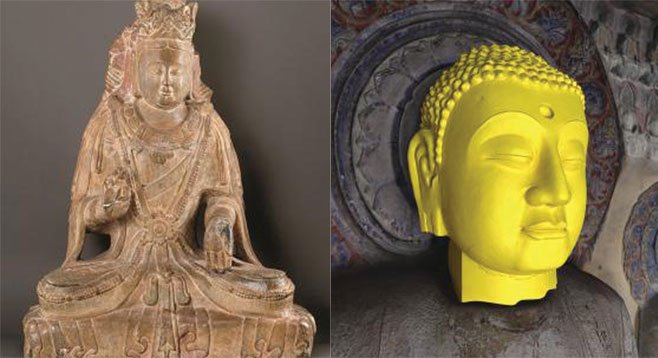 I once saw in the San Francisco airport a group of Tibetan monks waiting for their flight. It may have been my own dim, needy mood, but they seemed to me deeply, serenely happy. It wasn’t just the composure of their smiling faces, it was the wholeness of their spiritual presence, which seemed bodily to take in the world and its trouble. I thought of them — they looked as if they carried within themselves a completed, satisfying vision of things — when I saw the Buddhas and bodhisattvas in Echoes of the Past: The Buddhist Cave Temples of Xiangtangshan, currently on view at the San Diego Museum of Art.

The exhibition pulls together the material world of stone sculpture, the spiritual realm that the sculptures refer to, and the digital sphere that has helped scholars and historians visualize what ruins once looked like. In the 6th Century, the Northern Xi dynasty in Hebei Province (in China’s northeast corner) carved a series of caves into the local limestone mountainside and filled them with devotional images to be worshipped by resident monks and pilgrims. It wasn’t unusual for dynasties to create and preserve such places, but in the early years of the 20th Century, when imperial China was agonizing itself into a republic, political and social instability caused many temple caves to go untended, so they were looted and the spoils sold (with few scruples about provenance) to collectors and to Western museums developing Asian collections.

The attributions of the 14 objects in Echoes of the Past suggest the history of the cave and its contents. Some identify the original purchase source (“University of Pennsylvania Museum, Purchased from C.T. Loo, 1916”), others identify only the lending institution and, sometimes, the buyer (“from the Avery Brundage Collection”). Scholars have identified works that came from the caves by comparing them to works not removed and by matching removed body parts to chisel marks on what was left behind.

More importantly, each object says something about Buddhist belief. A couple of bodhisattvas are draped with jewels, which are a metaphor for what Buddhist writings call “the enlightened mind,” and enlightenment confers healing, restorative powers. Jewels also signify the power of wisdom to dispel bad thinking, suffering, and ignorance. The figures themselves are manifestations of colossal interior stillness, but the necklaces and garments swaddling the statues flow and curve back on themselves: once your eye begins to follow a line, it can’t be still. The folds of the gown on one Seated Boddhi fall and pleat down the pedestal in one sweet unbroken rhythm — the surfaces are an everlasting energy.

The most powerful piece in the exhibition is a monster, one of many the caves contained. Such sculptures were so scarily dramatic that they were the first things to be chiseled away and peddled in the international art market, although few foreigners knew what they meant. (In order to protect their supply sources, dealers didn’t share information, and their clients, in any event, weren’t much interested in belief systems.) In Buddhist thought, monsters, with their huge teeth, jumpy eyes, sickled horns, and fat tongues, caused evil and suffering; inside the caves, they were positioned to support pillars and columns, subservient therefore to Buddha’s power to tame them and to tamp down superstitious fears.

But stone stuff makes up just a portion of the exhibition and gives only a sketchy sense of what the caves contained. The rest of Echoes of the Past describes a project undertaken by the Center for the Art of East Asia at the University of Chicago to digitally recover and re-create the caves’ original contents. Using 3-D scanning technology that can hose down all sides of an object’s surface, the research team photographed every square inch of the caves, crunched all the data, and created fully dimensioned models of the statuary. The Spider Man technology — all the surfaces in the museum’s “digital cave” are plotted by green webbing — allowed the team to map the caves’ interiors so that they could then project perfectly proportioned Buddha and boddhi heads, as well as monsters, temple attendants, musicians, and other original details. Plan to spend some time in the digital cave, because in addition to re-imaging a vanished original, it conveys a feeling for the devotional piety worshippers once brought to these spaces.

The mountainside temples are still destinations. The short and rather primitive “Pilgrimage Video” included in the exhibition takes us to the Xiangtangshan caves and the nearby, industrialized mining town of Fengfeng. It shows farmers working fields in the lowlands outside town, monks up in the caves, worshippers bringing flowers, food, and baby dolls to leave in the temples, and — every shrine must have its due — one sorry tourist trap.

It thrilled me to pass from the rigorous, mineralized stylization and religiosity of Xiangtangshan’s caves to the ethereal openness and floating color of an adjacent exhibition, Dyeing Elegance, which features textile paintings on kimonos, obi, and screens by Japanese father-and-daughter pair Kuboku and Hisako Takaku. Born in 1908, the elder Takaku practiced an ancient wax-resist dyeing technique called roketsuzome. (A resist is any substance that stops dye from staining fabric in certain places.) He traveled in two worlds, the high-fashion milieu of Tokyo’s elite and the fine-art world of mid-20th-century painting. He cultivated an arduous and unforgiving art: because he applied color with a brush and needed to saturate the fabric with one stroke, he had no margin for error. He didn’t layer color. To create modulated passages, he laid one color alongside another and allowed one to “breathe on” the other. Takaku worked out his pictorial conceits in advance, and in great detail. Once executed, it had to look absolutely spontaneous. His goal was total saturation resulting in total translucency. It’s an exquisitely difficult method that resulted in works of otherworldly ease and simplicity. Growing up in the countryside before moving to Tokyo in 1926, he brought a pastoral sensibility to the big city. Most of his motifs came from the natural order: plum blossoms, butterflies, rabbits, camellias, water lilies. He either depicted or suggested the entire cycle and structure of a thing. His princely picture of rubber plants shows root and soil and stem and flower, presented with a monochromatic flatness and cut-out composition he partly derived from Matisse, Braque, Picasso, and other modern European colorists whose forms came out of earlier painters such as Gauguin and Van Gogh, who themselves derived their screen-like world of appearances from Japanese prints that flooded Europe in the late 19th Century. Takaku’s adopted daughter, Hisako, born in 1944, is one of the few artists alive who preserve the knowledge of her father’s ancient methods and, like him, her obi and kimonos are quite chic and much in demand among Japan’s affluent classes.

The designs of both father (who died in 1993) and daughter look misted into the fabric. One of Kuboku’s obi features blue hydrangeas, and the tonal range of softly defined petals, within a small surface coverage, is great but subtly graduated, from transparent azure through tissuey violet to inky purple. He aspired to balance opposing elements — tension and release, concentration and distillation, density and lightness — by unifying them with swift pictorial energy. Hisako carries on that tradition. Her Obi with Water Current is pure speed and stillness: the apparently nonchalant, calligraphic brushwork generates a binding force. In his catalog essay, Masato Nakano says that when Kuboku fuses subject and material, the result is “beauty without reason.” That’s an appropriately ambiguous phrase to describe an art that’s reducible only to its own mysteries of inspiration and touch. ■

Echoes of the Past: The Buddhist Cave Temples of Xiangtangshan and Dyeing Elegance: Asian Modernism and the Art of Kuboku and Hisako Takaku are on view at the San Diego Museum of Art until May 27. 1450 El Prado, Balboa Park, 619-232-7931.