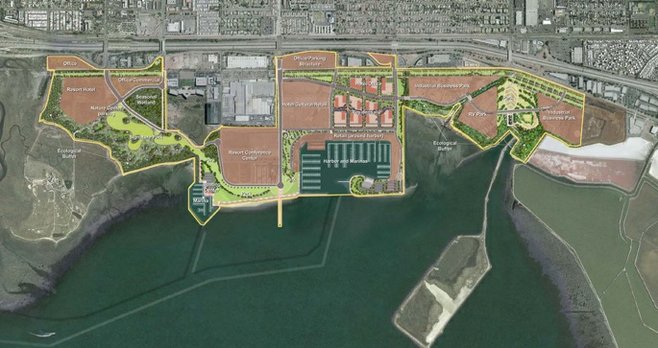 A petition drive for a revised bayfront plan has been launched in Chula Vista by a coalition of individuals, community groups, and a local business, Marine Group Boatworks. The “Better Bayfront Plan” proposes a 35-acre park, a reduced-density plan, and an extended lease for the waterfront boatyard business.

The petition was unveiled at an informational meeting hosted by Northwest Civic Association on April 11. David Danciu and Peter Watry, representatives of Crossroads II, an organization founded to deal with land-use issues, advocated for a combination of two alternative plans that already exist in the Chula Vista Master Plan Environmental Impact Review: the Harbor Park Plan and the Reduced Density Plan.

Representatives from the City of Chula Vista and the Port of San Diego presented the Sweetwater Plan, which will go before the Coastal Commission this July.

The Sweetwater Plan was created to accommodate the Gaylord hotel and convention center development. (Gaylord subsequently withdrew its development proposal). The city-backed plan contains the same number of park acres but divides them into two sections. Public activities in one portion of the park will be circumscribed because it abuts a conservation area. The park area is 11 acres, which Crossroads II believes is too small.

The Marine Boatyard Group joined the petitioners because the port has not renewed its lease beyond 2020. According to Todd Roberts, vice president of the company, 60 percent of the company’s workers live in Chula Vista. Roberts also claims that the boatyard annually spends $7.4 million in South County.

Assistant city manager Gary Halbert stressed the need for the bayfront project to revitalize the city’s economy. He also said if the Sweetwater Plan fails to pass muster with the Coastal Commission, it will set the city back at least three years.

Halbert pointed out that the city can no longer rely on redevelopment funding or staff to reshape a new plan.

Watry responded that the Better Bayfront Plan has already passed the environmental impact report and noted that San Diego had a similar imbroglio with its park in the Embarcadero area and was able to move forward within a year.

According to Watry, Crossroads II resorted to a petition because the city and the port have refused to compromise on the size of the park. 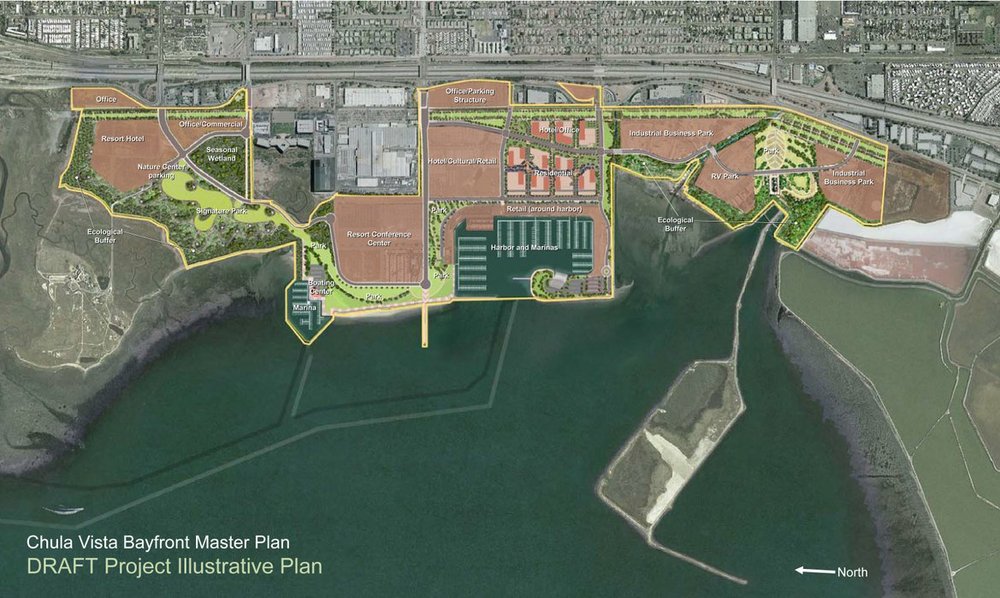 Ms. Luzzaro: Is there a way to blow up the map so the reader can get a clear picture of the areas we are talking about?

Dr. and Mrs. Watry aren't really serious; they are just opposed to be opposed. If they ever supported anything positive in this city folks would think they had gone crazy. And that is the way they are seen and understood by anyone who is not a dues paying member of Crossroads.

hmmmm, interesting i am of a different understanding.

Jimz: I think you misunderstand the point. They are in support of the Bayfront; they just want a better vision with a park large enough to bring people to the Bayfront. To say that "they are just opposed to be opposed" is simplistic thinking and does nothing for a discussion of the issue. The real problem is the Port staff who is so arrogant as to take this to the Coastal Commission with the possibility they will lose (like they did last year).

anniej, sorry I've been missing in action and I don't have an answer to your question yet about a blow up map. I'll see if I can get one to you...

if you can that would be great, if not do not worry i can find the info