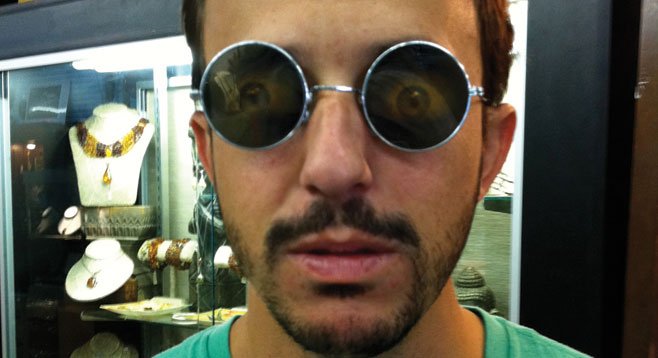 Even if you haven’t heard of Mario Quintero’s bands Sleep Lady (whose bassist is his wife, Sarah Quintero) and Hialeah, if you’re a San Diego music fan, you probably own something produced at his Black Box Studio in Golden Hill.

A partial list of his local clients includes Transfer, Modern Rifles, Japanese Sunday, Apes of Wrath, the Long and Short of It, the North Atlantic, Goodbye Blue Monday, Marasol, Sirhan Sirhan, A Scribe Amidst the Lions, Swim Party, Fever Sleeves, and the newest from the Beautiful View, with whom Quintero just finished showcasing at Austin’s South By Southwest music fest.

“It was originally conceived as a wired concert venue, where we could record live performances,” says Quintero. “We had bands like Goblin Cock and Ilya come in to play shows, and all while we were building this maze of soundproof rooms and collecting equipment [to do] more sophisticated full-service recording.” The studio is now also home to Quintero’s record label, Requiemme.

Quintero feels it’s important to maintain his hand in at least one or two working bands. “The studio doesn’t leave me a lot of free time…with Sleep Lady, I mainly play guitar. I also play drums in a band called Great Like Cake, which is more of a post-punk-type thing. Much of what I do now, musically, is more on the recording and production side of things. I do a lot of session playing and arranging with the other bands.”

WHO ARE YOU LISTENING TO?

“Immovable Objects, East of Sweden, D/wolves, and, if I’m lucky and there’s still time on the clock, some Helmet.”

“I tend to use my phone as my main music-listening device, but it’s rare these days that I get a chance to listen to music because I’m usually too busy working with music. So mostly I’m listening to either demos of the bands I’m working with or playing rough mixes to get mixing and production ideas.”

ANYONE YOU WERE EMBARRASSED TO MENTION?

“Even though I actually like this song, and it’s over ten years old, it would have to be ‘Nothin,’ by a hip-hop group called N.O.R.E.”

“I really used to enjoy the free shows at Scolari’s Office, back in the day.”

“Greg Allman practiced at Black Box in 2009 before his show at Humphrey’s. He packed a bowl [with marijuana], so I couldn’t say no.”

“When I was the manager at Sushi Deli 2, I did a shot with Johnny Rotten.”

“Seeing Jawbox reunite for the first time in a dozen years to play on the Jimmy Fallon show in December 2009. It was great, because I never got to see them before they broke up and I was in New York City with my best friend, who’s now my wife, and it was f#cking Jawbox!"

WHAT WOULD YOU LIKE TO TELL THE YOUNGER YOU?

“Instead of wasting $30,000 a year to go to an overrated music college in Boston, take that money and buy some great gear, because you’re gonna own a studio in the next four years and you’ll go broke buying gear. Oh, and grow the f#ck up, quit blaming your lack of success on others, and work harder on your own shit.”

“When I was seven and living in Bogotá, Colombia, I busted my face and two teeth out on Mother’s Day while I was riding a bike that was too big for me. They used to close a main street on Sundays for people to ride bikes and skate, and I got run into by some guy. I had to wear a fake tooth and a retainer-thing for a few months, which added countless insults to my injury.”

“I got my identity stolen when I was 21, and it really fked up my life for the next eight to ten years. When I was living in Boston in 1998, I started getting bills in the mail for places I’d never heard of. Come to find out that a guy in California had six credit cards, two delinquent bank accounts, and a car repossession under my name. I still sometimes get calls from creditors.”

SOMETHING TRUE ABOUT YOU THAT FEW WOULD BELIEVE?

Outtakes: SOUNDTRACK OF YOUR LIFE? “We Built This City, by Starship. [Lyric sample] ‘Don’t you remember, we built this city on rock and roll.’”

ANY FEARS OR PHOBIAS? “I’m not big on drowning.”

YOUR MOST UNIQUE PHYSICAL FEATURE? “I can’t bend my thumbs forward like most people.”

WHO DO PEOPLE SAY YOU LOOK LIKE? “Unfortunately, the only ones I’ve gotten are Kevin Costner, Adam Sandler, and Pauly Shore. I mean, what the f#ck. Really?”

DO YOU BELIEVE IN MAGIC? “Only voodoo.”