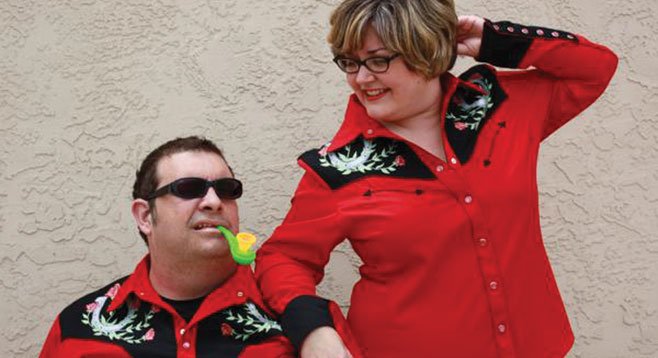 “The cool thing about performing funny songs is that you know immediately if the audience is enjoying the tune based on their laughter,” says rapper/rocker Rob Deez. “They’ll be laughing so hard at one line that they’ll miss the next. I’m not worried about being pigeonholed as a novelty act...there’s a lot of improvising in my act, and that appeals to the folks that wouldn’t otherwise be interested in what I’m doing.”

San Diego has a long tradition of comedic music, from Frank Zappa and his protégé Wild Man Fischer to the Rugburns (“Hitchhiker Joe”), the Beat Farmers (“Happy Boy”), the Bugs (“Dave Navarro’s Goatee Fucking Sucks”), Grammatical B (“Don’t Ask Don’t Intel”), and “the Mexican Elvis” El Vez, as well as José Sinatra, Adam Gimbel, and Mojo Nixon, whose comedic cut “Stuffin’ Martha’s Muffin” got him banned from MTV for singing about one of their VeeJay’s vajayjay.

Local duo Pony Death Ride (“Breaking Up with You Is Gonna Be Fun”) is recording a new full-length, with songs concerning fans of anthropomorphic funny-animal sex (“Furries”) and the former lead singer of the Smiths (“I Think My Boyfriend’s Gay For Morrissey”). “I do worry about being pigeonholed as a ‘novelty’ act,” says Joe MacAskill, “because people sometimes underestimate the amount of thought and time that goes into writing songs like ours. That’s why we incorporate the punk-rock element and a variety of musical styles, to show that we’re versed in our craft.”

His wife and bandmate Jaye MacAskill disagrees. “I don’t mind being stereotyped, because I’m a big fan of old-school variety entertainment, like vaudeville and burlesque in the pre-WWII era and TV programming like the Carol Burnett Show and the Muppets. It’s difficult to stand out as a performer among so many other people doing more or less the same thing, like ‘rock’ or ‘country.’ There’s more diversity within the novelty acts.”

Rob Deez is working on a new album, with planned tracks to include “Self Deprecating Love Song,” “Check Into Cash,” and “Hairy Palms.” “All I’m trying to do is entertain people. And everyone loves to laugh,” says Deez, who appears April 14 at the Lazy Hummingbird in Ocean Beach.

Pigeonholed? I'm worried of being corn-holed myself.