A World Away from Old Town

“We’re breaking even, which is a miracle in winter.” 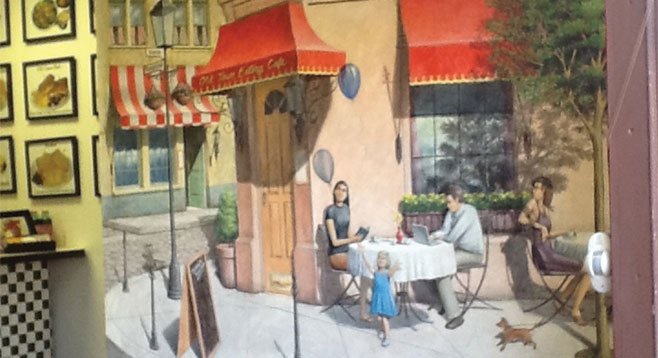 Kellie’s ahead of me in line. We’re standing between a bank of Canadian coffee dispensers and a Parisian street. Okay, a pretty darned convincing Parisian scene — on the wall.

“I come in here five days a week, and I always order exactly the same thing,” Kellie says. “A bagel sandwich. It’s my own invention.”

Kellie works at Gum Saan, the Chinese pioneer-era store in Old Town Plaza (it means “Golden Mountain,” the name Chinese used for Gold Rush California). And every day she walks the couple of blocks down for her “usual.”

“It’s a spinach bagel, with tomato, bacon, and lots of extra cream cheese.”

We’re on Congress Street, a world away from all the main Old Town action. I’m thinking: Why would someone come to Old Town’s outer reaches to eat? Must be something good going on here.

I had just been walking up from the trolley, when I noticed a strung-up banner that read, “Best Coffee in Old Town.” Then the wooden patio deck, painted chocolate brown, and the giant yucca tree growing up through an opening in it. I jes’ had to go in and test the coffee waters.

I passed all the tables on the deck and found myself stepping into this charming Parisian scene, thanks to a way-cool mural taking up most of one wall. 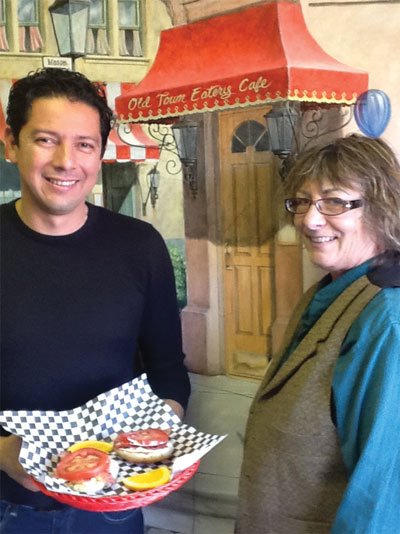 I fall in line behind Kellie and check the menu boards above the counter. Breakfast special today is huevos rancheros for $6.99. Lunch menu stars sandwiches such as the Old Town Club ($7.49), with turkey, bacon, and avocado, or bagel sandwiches (6.99), or jalapeño cheese quesadilla ($6.49, or $7.49 with chicken). Chicken Caesar salad is $7.99.

But, heck, Kellie’s tomato-bacon-cream-cheese bagel sounds good, so when my turn comes, I ask for that. Plus a coffee, seeing as it’s what I came in for in the first place.

That coffee. It’s called Van Houtte, and it’s a Fair Trade, certified-organic brew from Mexico. Dark. Has a velvety feel to it, but as it says by the dispenser, it’s “slightly bitter with a rich lingering flavor.”

“Van Houtte are like the Starbucks of Canada,” says the owner, Andrés Ortiz. “Their nearest office is in Orange County, so I’m surprised they service a little café like mine. And the coffee’s good. I know a little about coffee. I’m from Colombia.”

He hands me my “Kellie” bagel. It’s good and gungy, with tons of cream cheese, nice-sized slabs of bacon, and the tomato to wet it all down. Plus a couple of slices of orange on the side, if you want to tang it up.

Gotta say, this wanna-be-Old-Town street is strewn with broken dreams, restaurants opened and closed, so kudos to Andrés for coming and starting up here last year.

“I’m used to uphill battles,” he says. “I come from Medellin. I arrived in the States when I was 25…”

Andrés does have an incredible story. “I didn’t want to come. I played basketball for Medellin. I was on the Colombian national team three years in a row. I was famous, traveling a lot. It was a good life. My dad was famous, too: he was Mr. Colombia Bodybuilder. But he and my mom decided to leave because the crime and drug violence got too much. You couldn’t walk out your door without worrying. I came with them because we are a close family. We stick together.”

He had to start over from zero. “When I got here, I couldn’t speak English, I had no money. I had to take jobs cleaning in hotels, washing dishes in restaurants.”

Finally, after ten years, he and his wife Karen started collecting the used table candles of the restaurant he worked in, remixing the wax so it stayed solid but with a tough jelly form. They sold bamboo growing in it. “Swap meets, farmers’ markets. We’d sell it everywhere, $5 per plant.”

That was ten years ago. Along the way, Andrés started taking over carts in Old Town that sold trinkets, clothing, and traditional ceramics from Mexico. He traveled into southern Mexico and set up relationships with artisans, had them send up their work on a regular basis. The guy must have worked his butt off.

But this place ain’t no market cart. It took big outlays to get it up and running. It is maybe his biggest gamble. Right now, he’s just trying to get through the winter, till all the snowbirds and tourists come back. “The incredible thing is, local people have stayed with us. People like Kellie have kept us going. We’re breaking even, which is a miracle in winter.”

Partly, it has to be because he has signs that say “Dogs Welcome” and “Free WiFi.” It feels as if you’re wanted here. Eating out under an 80-year-old yucca tree with a little fountain gurgling ain’t so bad, either.

He’s keeping costs down by being here himself, seven days a week, from dawn till dusk. He also has the other craft carts he and Karen run, and he has to go on buying trips to Mexico to supply them. I get tired just thinking about it.

Which is funny, because, here, it feels like an oasis from the world and its worries.

Or maybe I’ll come in like Kellie and say, “The usual.” ■