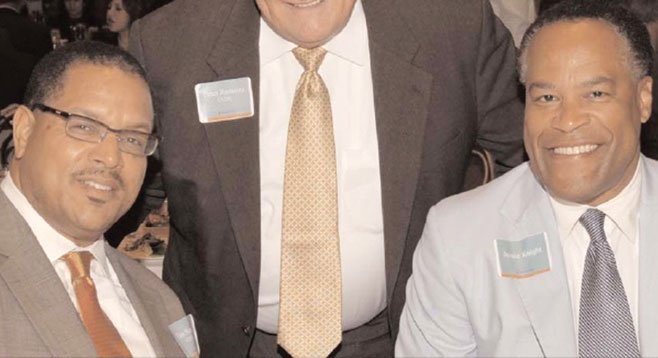 Sempra Energy, the San Diego–based utility, is wealthy by comparison with other utilities. It is obsessed with handing out its riches to its shareholders (particularly its own top executives) at the expense of its customers. Quietly, officials of the California Public Utilities Commission, supposedly the unbiased regulator, rake in some of that lucre.

In theory, public utilities are supposed to provide reasonably priced, reliable service to customers, as well as pleasing shareholders. A major mandate of the state utilities commission is to safeguard consumers. But Sempra and the commission are fixated on pleasing Wall Street.

Best-in-class, indeed. Standard & Poor’s lists profits as a percent of revenue for eight comparable American utilities. Sempra’s 13.5 percent whips them all; five of the eight have returns less than half of Sempra’s. Yet both San Diego Gas & Electric and Southern California Gas are now trying to get hefty rate boosts from the commission.

In its 2010 annual report, Sempra has a chart pointing out that its stock’s total return (dividends plus capital gains) zoomed 208 percent from 2000 to 2010, while average utility returns went up a mere 8 percent. The company recently raised its dividend 23 percent and has announced plans to buy back its stock — a classic move to inflate earnings per share and the stock price.

Why is Sempra so profitable and its stock price so high? It shortchanges the poor and middle class, its customers, to reward the rich, its shareholders. This week (Thursday, April 5), at 2:00 p.m. and 6:00 p.m. at the Al Bahr Shrine Center, commission representatives will hear from San Diegans about San Diego Gas & Electric’s proposed scheme to make customers pay for uninsured costs of the 2007 wildfires, for which the company was found negligent. The company also wants customer indemnification for such costs of future fires.

Opponents argue correctly that since San Diego Gas & Electric was found negligent in those fires, the costs should be borne by shareholders, not customers. But the company pampers those shareholders — particularly those inside the company. In 2010, the last year in which comparisons can be made, Sempra’s then–chief executive Don Felsinger brought home $10.2 million. I checked 22 similar utilities: only 2 of the 22 top executives of those utilities made more than Felsinger. I checked chief-executive pay of 8 of the largest utilities: only 2 brought home more than Felsinger in 2010.

“Felsinger’s compensation was definitely on the high end compared with the company’s peers,” deadpans Morningstar’s Barnett. And Sempra also does some finagling in fixing compensation: “The company is not above tweaking performance targets to maximize bonus payouts, as was done in 2010.”

The finagling that appears equally repugnant is the company’s — and the industry’s — role in subsidizing commissioners of the California Public Utilities Commission.

The commissioner who is handling San Diego Gas & Electric’s attempt to stiff consumers is Timothy Alan Simon, who was appointed in early 2007 by former governor Arnold Schwarzenegger, for whom Simon had been an aide. He had been recommended for the commission by California political powerhouse Willie Brown. Simon had been in bankruptcy for four years before his nomination, according to a story in the Los Angeles Times. Former utilities commission president Loretta Lynch was one of several knowledgeable people questioning whether someone with obvious financial woes should be named a commissioner. State senator Christine Kehoe of San Diego challenged Simon’s knowledge of utility issues.

Early last month, commissioners submitted their Form 700 statement of economic interests. Simon’s shows that last year, he took a trip to Italy. The industry-financed California Foundation on the Environment and the Economy picked up the tab for $10,017. Daniel Skopec, Sempra’s vice president of regulatory and legislative affairs, is a member of the foundation. Michael Peevey, president of the regulatory commission, was also on that trip, costing the foundation $9687.10. Peevey took a trip to Ireland and Great Britain last year that cost the foundation $10,078.80. Simon and Peevey also took a trip to Sweden that cost the utility industry a total of almost $12,000.

San Diego Gas & Electric picked up the tab for three dinners for Simon, costing $200, plus $12 for a cab ride.

Simon was one busy commissioner last year. On 88 occasions, he took trips, had meals, or accepted gifts, as recorded in the Form 700 category of “Income—Gifts, Travel Payments, Advances, and Reimbursements.” Some of the trips took four days. The trips to Italy and Sweden each took well over a week. The total manna: more than $50,000.

San Diego attorney Michael Aguirre got an anonymous tip from inside the commission that at one of the meals, Simon committed himself to permit San Diego Gas & Electric to fleece its customers for uninsured fire costs. Aguirre wrote Simon, “An issue has arisen about whether you provided private assurances to [San Diego Gas & Electric] officials that the [California Public Utilities Commission] would allow SDGE to raise rates of its customers to pay for liability costs from the 2007 fires that were in excess of SDGE’s insurance.” Aguirre asked for any communications relevant to that topic. “He sent back documents that didn’t answer the question,” says Aguirre.

Sempra’s fat profits, excessive compensation, and coziness with commissioners could be subjects for the April 5 meeting.

Folks, don't let them divide (and thus conquer) y'all. They will try to dilute your comments and set you against each other. They also will insert fifth columnists into the audience. Try to head such tactics off at the pass. Pool the comment times by giving one or two speakers enough time to speak for the group and select a good speaker (fifth-columnists will try to get this spot and add diluting comments) who will stick to a script. Basic politics: STAY ON MESSAGE.

Get a big crowd out early and notify the media that you will be assembling before and after the "meeting." Minimize drama, but be firm and strong (just not strong-smelling).

Good advice, Twister. If a lot of San Diegans don't show up, and those who do aren't vociferous, SDGE will continue stealing from customers' pockets indefinitely. I believe this has been rigged and only strong opposition can thwart it. Best, Don Bauder

I encourage all who can, attend this EXTREMELY important hearing regarding SDG&E rate hakes to pay for fires that was found to have THEIR OWN FAULT due to THEIR OWN NEGLIGENCE. Because... now here is the clincher, if they get the rate hike, tied into it is a clause that will forever indemnify them of any future claims, NO MATTER if they are NEGLIGENT or NOT. YOU GOT THAT, FOLKS???? If this passes, SDG$E could potentially kill your family and get away with it, legally. SHOW UP!!!!

The CPUC wants to restrict this session to the subject of consumers paying uninsured costs of the 2007 fires. However, the utility's attempt to get ratepayers to pick up similar costs for all future fires is on the table at the same time, and in many ways is even scarier. Yes, San Diegans must show up, and must complain. Best, Don Bauder

oh my!, the picture reminds me of a few pictures starring sweetwater union high school board members, superintendents, and contracting firms.

It is a story-telling photo. We don't know who the guy in the middle is. Best, Don Bauder

Great stock to own.

It has been a great stock to own, Jeff, because Sempra cares only about its shareholders, and cares not a whit about its customers or employees. However, you live in Florida. San Diegans get stuck with the tab for this attempt to get them to pay for SDGE's fire negligence. One thing you have to consider in future purchases of Sempra stock: San Onofre. That shutdown may hurt Sempra stock. Of course, for ethical reasons I cannot own any San Diego stock or bond. Best, Don Bauder

Diane Conklin has done a superb job battling SDGE's scam. She has been on radio and TV recently and has written op-eds for papers. I would expect that she would speak today. NOTE TO SAN DIEGANS: SHOW UP TODAY, OR YOU WILL BE SORRY! Best, Don Bauder

This is why we need alternative newspapers. The Urinal Tribune would never publish something like this. I found some articles about the meeting but I could not find any opinion on the situation. It is scary to think that SDG&E has paid off at least one of the commissioners. It is nice to see that the Reader is on top of this. The more corrupt politicos you can expose, the better for us citizens.

The Reader will stay on top of this. There appears to be a great deal more. For example, one of the things that came out at the CPUC hearing Thursday is that the administrative law judge on the fire insurance case worked for 6 years for SDGE. This is outrageous. Best, Don Bauder

I thought we had an alternative newspaper in the Reader. It is, of course, but it is not living up to it's previous (to the new "look") reputation (apparently in my mind only). The Suggestion Box continues to be moribund:

A week of no action on the Suggestion Box http://www.sandiegoreader.com/weblogs... must tell you something. No new posts from the Readership, and no responses from WebAdmin, or that access to it is so obscure that people can't find it. I continue to be unable to find the Suggestion Box by any means other than using the above URL. One way to be immune from criticism is to ignore it. The only way I can think of to propagate this information is to post it on popular blogs like Don Bauder's.

My take on this is that WebAdmin doesn't want feedback of this sort. However, I remain eager to be corrected in my misapprehensions.

My post was relevant to the two posts preceding it, including yours, Don. I suggest that you suggest that those wishing to "express your thoughts" concerning the Reader go instead to the link I supplied. In that way, such comments will be consolidated for all to see, not restricted to an email to which only Web Admin is privy. I am getting distressed at the many ways the issue of the quality and usability of the Reader website is being swept under the rug (amid cries and pretensions of participative journalism). Maybe we do need an alternative newspaper after all?

It is appalling how we have become inured to these huge salaries for top corporate execs. Back in the 80's there was a hue and cry at the salary paid to Tom Page, that sorry excuse of a president of SDGE. He was taking down about a quarter million at the time, and folks locally thought that was high. He justified it by stating that he was actually covering three positions that the company should have had. Huh? Well, I specifically remember him saying that he was doing the job of president and the job of CEO, and then mentioned a third one, which I think was COO. Silly me, I thought that the definition of president was "chief executive officer" but by that time there were corporations that separated the two titles. I guess that the president was sort of overall overseer while the CEO was the one to actually "execute" the direction. Then the COO ran the everyday operations. Don't know about you, but they all sound like the same thing to me. But that was his story. And all that fuss about a $250K salary! Today that's comparatively nothing.

The average CEO pay for S&P 500 companies is around $15 million. Best, Don Bauder

Interesting, but SDG&E has thrived despite the presence of a local consumer utility watchdog, something most communities don't have.

That has always been an embarrassment for Utility Consumers' Action Network (UCAN). UCAN keeps purportedly fighting rate increases, and getting fat intervenor fees in the process, but SDGE gets the big increases. Some are very cynical about this. Count me as one getting more that way. Is this hand-to-hand combat or the holding of hands? Best, Don Bauder