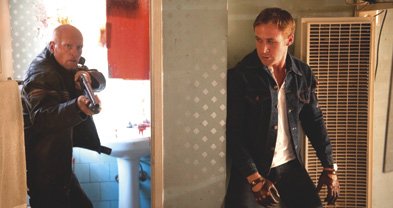 We drive through a plague, past dear Mozart, and on to pretty Coronado:

Ryan Gosling, once a Mouseketeer on TV, will never be one of the big, terse dominators (Mitchum, Marvin, Bronson, Eastwood). But his reserve as Driver has simmering power, an aura of neurotic sensitivity with some dark corners.

As Driver, Gosling does movie car stunts but mostly works at a garage. He also drove for a robbery, and he gets into a mess with ruthless thugs because his loner’s heart has gone out to the gentle beauty (Carey Mulligan) who lives down the hall. She has an appealing kid and a husband who returns from prison (Oscar Isaac makes something human of a role stamped “made to exit”).

Mulligan (An Education) must have the most wistful, please-help-me eyes since Sylvia Sidney. With tact and delicacy, the story prepares a romance. Then it veers into hard-noir violence, often superbly staged but quite rough. We fear that something awful could happen to Mulligan and her child in this odd, erratic, unsettling, riveting film.

Danish director Nicolas Winding Refn, with writer Hossein Amini (far away from his work on Henry James’s Wings of the Dove), reaches for the commercial but also artistic realms of Quentin Tarantino, David Lynch, and Paul Thomas Anderson. Refn uses L.A. brilliantly, with a hard glow of precision. And he gets a terrific villain from the comedic wizard Albert Brooks, whose line readings achieve sadistic purity as he opens a man’s veins: “Don’t worry. That’s it. There’s no pain.”

Refn indulges himself, as when topless showgirls freeze like statues during an act of violence, and in a shocking scene in an elevator. He over-uses songs to offset the brooding silences. More good driving and less cruelty might have been a better recipe.

Still, there is highly effective pleasure in the way that Refn explores the familiar L.A. crime genre. He can creep you out, and he shows the unbound, look-what-I-can-do ambition of Stanley Kubrick’s The Killing and John Boorman’s Point Blank. This flawed fascinator is one of the year’s most involving movies. 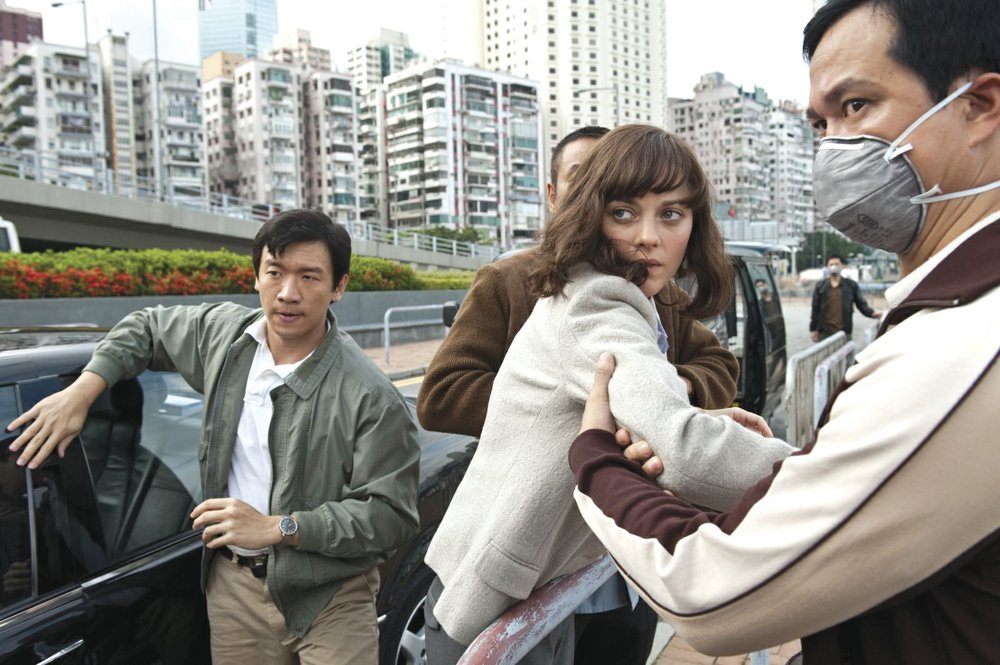 We know the global plague in Contagion is vicious, because it starts off by killing Gwyneth Paltrow. This leads to what is not exactly the Vogue money shot of Gwyn’s career, as an autopsy peels back the skin of her skull.

Paltrow is replaced by noble doctors Marion Cotillard and Kate Winslet, as well as mass graves, looted stores, and grim conferences where epidemiologist Laurence Fishburne is the solemn voice of science (he sounds like Dennis Haysbert rumbling for Allstate Insurance on TV). Immune to the new bug, which Paltrow brought back from Hong Kong, is widower Matt Damon. His acting seems to be pro-bono work for a documentary on disease vectors.

Elliott Gould, as the best medical mind, has few lines. Jude Law is an internet-conspiracy freak whose bad teeth symbolize his status as a one-man pandemic of paranoia. The stars might as well be under a microscope. Director Steven Soderbergh moves them like pox dots through cold vistas of medical factories, antiseptic offices, statistical lives sprinkled with family-values moments. After cranking up mild suspense, Soderbergh shrugs it away with a yawn.

Watching Zero Mostel sweat and squeal in the 1950 bubonic plague movie Panic in the Streets was more exciting. Nice, dull Damon seems only vaguely aware that martyred wife Paltrow was cheating on him. He never gets to strut like Charlton Heston, so guilty in Earthquake (1974) about his affair with Genevieve Bujold that he runs off to rescue his shrewish wife Ava Gardner. 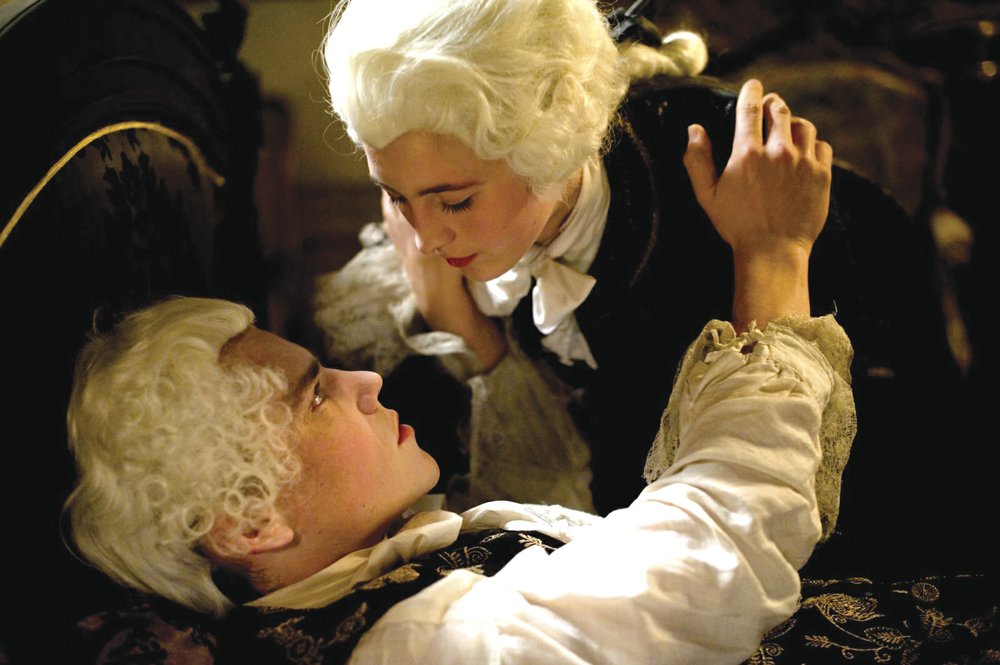 Amadeus, Oscar’s Best Picture of 1984, sought to free Wolfgang from his plaster image as a small bust on too many pianos, and this film hauls a progressive agenda by treating Nannerl as a feminist martyr, whose talent her father nurtured only to choke. Leopold understood that Wolfgang was the golden ticket. And he felt, in line with ruling prejudice, that even gifted girls could not fathom counterpoint (he must never have listened to much feminine conversation).

Nannerl’s friendship with pious Princess Louise leads to a musically driven bond at Versailles with the dauphin (royal heir), played by Clovis Fouin as a moody loner with gossamer hints of gayness. Some cross-dressing feels wittily Mozartean, but the royal connection is fake. And Nannerl’s composition (how genuine?) for the dauphin sounds wistfully baroque and, like the script, rather clunky.

Nannerl married rich, lived long, helped build the myth. Here she is a strained 21st-century conceit in elegant 18th-century clothing. A new Isabelle Adjani or Juliette Binoche might have done much with this role. Marie Féret is only uneasy, like an ivory cameo yearning to become a plaster bust.

Is a rehabbed theater reborn or just a mummy in new wraps? I’d say that Coronado’s Village Theater has been reborn.

It may be our area’s prettiest movie showcase, though I haven’t seen the new Cinepolis Luxury Cinemas in Del Mar Highlands. The Village has a slicked but lingering aura of the Art Deco landmark that opened in 1947, offering such fare as Bogart and Bacall in The Big Sleep. The site was dark for 11 years, a wreck until rebirth on June 23. I visited the restoration last month.

The Village once had 600 seats. Its main house now has 215, plus two “screening rooms” of 38 seats each. There is the elegantly polished lobby floor of old Terrazzo marble, also etched-glass doors, poster wall boxes, cushy seating, imposing curtains, a swank vending counter, up-to-date restrooms, and in each auditorium cheerfully nostalgic murals by the late Joseph Musil and other artists.

Nostalgia hovers, but not heavily. Nat King Cole singing “Stardust” was a fine welcome as I entered the main hall. It felt spacious, with wide room between rows. I viewed a film in one of the mini-theaters tucked off the aisle that leads to the largest screen, and the beasts of Rise of the Planet of the Apes swung from the Golden Gate Bridge with engulfing power.

Fully digital projection was expertly handled by Jordan Steele, who manages the theater for L.A.-based Vintage Cinemas. Overall, the Village is like the radiant theater paintings of Davis Cone, but it also has a true neighborhood feeling. It is not just another plex-box.

A community labor of love (plus $3 million), the new venue is betting on safe, mainstream programming for the island’s families, tourists, retirees, and Navy personnel. It cannot show classic celluloid and may be too small for festivals. I hope there will be some older films, kids’ shows, senior matinees, even an occasional gamble on the arty-smarty (maybe in league with the Landmark or Reading chains across the bay?).

Joseph Ditler, who helped promote the June launch, is savvy about Coronado and the larger market potential. Such local enthusiasm matters. Inventive outreach could provide the crowning facet of what is already a well-cut jewel.

The Village is located at 820 Orange Avenue.

Newsreel: La Jolla-born film star Cliff Robertson died Saturday, one day after his 88th birthday. He was a gracious man, as I learned upon meeting him two years after 1968’s Charly brought him the actor Oscar. And a brave one: in 1977 he exposed the embezzlement schemes of top Hollywood agent and studio head David Begelman.

My favorite Robertson roles were two Joes and a J.W.: Joe Clay, the alcoholic loved by Piper Laurie in TV’s Days of Wine and Roses (1958); Senator Joe Cantwell, the most ruthless candidate in The Best Man (1964); and as the struggling rodeo rider J.W. in J.W.Coop (1971), which he also directed. It’s curious that his All-American image forged both a politician (Cantwell) based on Richard Nixon and war hero (later Nixon opponent) Jack Kennedy in 1963’s PT 109. See Scott Marks’s Robertson salute on the Reader’s movie blog The Big Screen.

Reviewed in the movie capsules: Bucky Larson: Born to Be a Star, The Hedgehog, and Magic Trip.