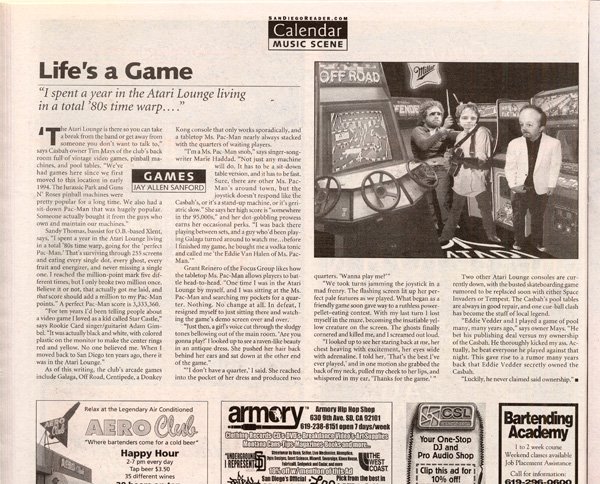 Thirty-Five Years Ago
Studio structures have been bemoaned for so long that it is almost an automatic reflex to greet the recent breakdown with cries of “Up the rebels.” But the upshot of independence is that theaters are exhibiting work more incompetent than anything shown anywhere but on 8mm home-movie screens. More malformed scripts, more flat-footed cameras, more mismatched shots. It is hard to resist a feeling that most of the people directing, photographing, and cutting movies today would be demoted to messenger boys if they were working for Harry Cohn.
— “PLEASE GO AWAY,” Duncan Shepherd, September 16, 1976

Supervisor Roger Hedgecock’s office began receiving complaints about the fruit stand from neighbors, a Mr. and Mrs. Norman Greene, primarily. The complaints focused on traffic congestion around the thriving wooden shack, and eventually four of the nearby homeowners’ associations lodged complaints...contending that the stand was inappropriate for the ritzy area. Hedgecock, ever the responsive civil servant, wasn’t about to ignore his constituents just because the law was on Houston’s side.
— CITY LIGHTS: “TRY GROWING CLOUT,” Neal Matthews, September 17, 1981

Twenty-Five Years Ago
Not all of the 70 or so houses destroyed in Normal Heights’s fierce 1985 canyon fire have been replaced yet. But some are built, others are nearing completion, and many more have enough of their frames in place to give passersby a good idea of what the finished structures will look like. From all this, it’s clear that if the rebuilt portions of Normal Heights suggest any kind of cloth at all, it’s a patchwork quilt.
— “DOES A HOUSE MAKE A NEIGHBORHOOD?” Jeannette De Wyze, September 18, 1986

Twenty Years Ago
Every time an afternoon paper folds, its reputation improves overnight. Suddenly the Tribune, according to armchair eulogists, was a feisty, independent voice, filled with wit, guts, and intrepid investigative reporters who wrote “without fear or favor.” More clear-eyed readers could see this as an attempt to apply makeup to a corpse that was still warm.
— CITY LIGHTS: “NOBODY ASKED US, BUT...A U-T SURVIVAL PLAN,” Neal Matthews, September 19, 1991

Fifteen Years Ago
Ria and Mark light up cigarettes. “I used to let people smoke inside,” says Mark. “Then [the authorities] called and threatened to sue. They stuck no-smoking signs on my window and they ruined me; 85 percent of my business is gone. From 250 customers a day to 100. Everybody who wants to start their day with coffee and a smoke goes to the Plank now.”
— TIN FORK: “THEY’RE KILLING MARK’S BUSINESS”, Ed Bedford, September 19, 1996

Ten Years Ago
Calm down! No one forces you to listen to 91X. If you find 92.1 to be a better station, and it will play your lame song, then listen to 92.1 and shut up.

The 91X program director was trying to tell you nicely that you’re a bitch and a royal pain in, well, you know what you’re a pain in. Turn the station if you have issues.

Better yet, if you just cannot make it through your day without Afroman (whatever), then go buy the CD and play it until your head explodes.
— LETTERS: “CALM DOWN!” C. Burke, September 13, 2001

Five Years Ago
Sandy Thomas, bassist for San Diego–based Xlent, says, “I spent a year in the Atari Lounge living in a total ’80s time warp, going for the ‘perfect Pac-Man.’ That’s surviving through 255 screens and eating every single dot, every ghost, every fruit, and energizer, and never missing a single one. I reached the million-point mark five different times, but I only broke two million once. Believe it or not, that actually got me laid, and that score should add a million to my Pac-Man points.” A perfect Pac-Man score is 3,333,360.
— “LIFE’S A GAME,” Jay Allen Sanford, September 14, 2006