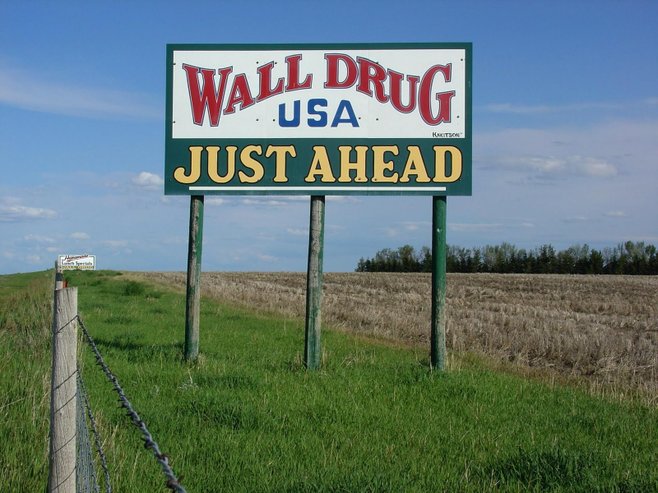 If you live in the United States, there’s most likely a Wal-Mart around the corner from your home: statistically, there are approximately 3,600 Wal-Mart stores in America. But there is only one Wall Drug, and it’s in the town of Wall, South Dakota.

As I drove across the country from Cleveland, Ohio, to San Diego, I passed through South Dakota in order to cross Mount Rushmore off of my travel bucket list. While driving past miles and miles of cornfields, my friend and I kept noticing these billboards for bizarre tourist traps, like Rapid City’s Reptile Gardens and Mitchell’s Corn Palace (which we imagined as a castle built entirely out of ears of corn).

These billboards came and went, but the ones for Wall Drug were especially persistent, beginning their repetition over 150 miles east of the town of Wall. At first, my friend and I laughed at these signs, which advertised everything from “Free Ice Water” to “Five-Cent Coffee” to a dinosaur backyard where you could “Do Lunch or Be Lunch.” I later learned that these Wall Drug signs can be found all over the globe, in places like England, Kenya, Afghanistan – even Antarctica.

In Neil Gaiman’s recent science fiction novel, American Gods, the mythical gods that still inhabit America use tourist attractions as gathering places for their meetings. If this were reality, Wall Drug would surely fit the bill, as it's indeed a bona fide preservation of Americana in the middle of the country. And in many ways, I believe it serves as a relic of a previous American lifestyle that still had room for community, family and generosity within its consumerism. Wall Drug’s signs offered “Free Coffee and Donuts for Veterans” and proclaimed “Kids Love Wall Drug!”

My friend and I eventually deemed Wall Drug as a worthy place for one of our pit stops on our long drive ending in Murdo, SD. We were not surprised by the hokey statues of reindeer or the one of a Tyrannosaurus Rex, borrowed from Universal Studios. But we were impressed by Wall Drug’s range of attractions, including a shooting range, diner-style food from several eras, a homemade ice cream shop, a cowboy bookstore, a church, and – yes, it was true – five-cent coffee.

In one sense, Wall Drug is just a warehouse of tchotchkes, knick-knacks and self-promoting souvenirs. In their largest shopping area, you could purchase personalized mini license plates, key chains and drink koozies all stamped with the Wall Drug label.

On the other hand, it represents a certain evolution. The South Dakota badlands, famous for the cowboy town Deadwood, used to be filled with buffalo, Native Americans and prairie schooners. Now, Wall Drug is what’s left of what used to be a wild territory, and its success can be partially attributed to its solitary, isolated nature.

While conserving certain traditional aspects of culture, Wall Drug shows that in America, many attractions entertain through imitation – not authenticity.

If you were looking for authenticity, then Wall Drug was definitely not the place to go. Wall Drug is what it is, and the fact that they have all those hokey road signs up,a hundred miles before you get there, lets you know pretty much what you will find when you get there.

You probably saw the photo wall while you were there that shows the history of the place, so as far as "American icons" goes, Wall is about as real as it gets in this country.

If you wanted to see truly authentic Americana, then you should have gone to Mitchell, to that Corn Palace. There is no pretense there and they don't try to sell you anything that doesn't have something to do with corn, or Mitchell, or the Palace.

The Palace itself is a sight to see; the outside is covered in large compositions made entirely out of dried corn on the cob. They split the cobs to get the size and shape they need, and they grow about a dozen or more varieties just to get the colors they need to create "pictures" of cowboys or Presidents, or whatever - depending on the theme that year.

The Palace is huge, which makes it all the more amazing considering the outside is entirely covered in corn. Inside, there are portraits, reproductions of famous painting, flags and other patriotic-themed art, and all sorts of amazing compositions, all made of corn cobs.

The Corn Palace is located in the middle of corn country, so while it is an amazing sight to see, it comes as no surprise and in my opinion, is as authentic as anything you'll come across while traveling cross country. If you make the trip again, take the road to Mitchell. You won't get 5-cent coffee, but you will see a piece of Americana that has to be seen to be believed.