The Best Main Dishes from the "Feast" Blog 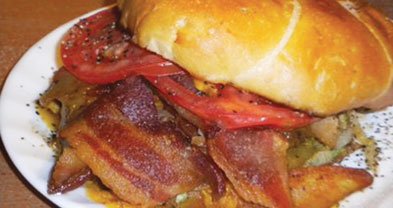 What follows is a selection of posts from our Feast! blog. Every day our team of foodies posts news and reviews from San Diego eateries.

New Menu Trend Leaves Too Much to the Imagination
By Brandon Hernández
Five years ago, I was noticing that a lot of menus in food-forward cities were starting to read very differently from those in San Diego. While a San Diego dish might be described as oven-roasted pancetta-wrapped quail with crimini-pinenut couscous stuffing, truffled asparagus, and balsamic reduction, it would be described in the simplest terms in NYC or L.A.: quail, pancetta, asparagus, balsamic.

This menu trend has reached SD. The first place I saw it was the now-closed Red Velvet Wine Bar, where chef Luke Johnson emulated the ways of mentor Grant Achatz of ChiTown’s much-celebrated Alinea and Next. A slightly more informative version of this style is in place at the Grand Del Mar’s Addison and a handful of other restaurants. The most recent I came across is 1500 Ocean at the Hotel del Coronado. There you’ll see dishes described like this: grouper, sea urchin, sorrel, carrot. The dish is a rectangular strip of nicely seared grouper with carrots served two ways — smoked and roasted — and a pitch-black sauce made from uni and several other secret ingredients.

No amount of culinary enlightenment can allow you to do more than put forth a best guess as to what a dish will look like with this limited amount of data. It simply doesn’t work, and it doesn’t have a place here in San Diego where we’re still finding our way where cuisine is concerned. It’s ill-advised to buy something without knowing what it is; and no matter how nice the waiter or waitress, nobody enjoys playing 20 questions when all the explaining can — and should — be done on the menu. Tell me how my carrots are cooked (or if they’re cooked), and don’t let me pass up something as delicious as “ham hock, turnip, nasturtium, mustard” simply because it’s impossible to imagine how it’s prepared.

The Eatery in the Architects’ Office
By Ed Bedford
Here’s how I discovered this hip place in Barrio Logan:

I was standing at the curb, looking kitty-corner from the New Mexico Cafe. Kinda rubbing the belly and slowly realizing that, hey, that’s an eating joint over there, where the Guild used to be.

Oh, I remember now. Blueprint Cafe (1805 Newton, at Beardsley, 619-233-7010). Brandon blogged about it a month or two ago. So, I’m all set walk on down to the trolley, when I see those two little words, maybe the two most powerful words in the universe: “Happy Hour.”

It’s just past three...fresh in the HH zone. A minute later, I’m sitting up to the counter inside this little place with the bright blue inside wall and the cheery faces of Letitia Rogers and Gale Covner and Christie, who does the breakfasts. Gale’s the chef-owner.

She says she’s mainly a catering operation. “Look, my kitchen’s down there.” She shows me through a door to…a big architects’ office. And that’s why the “Blueprint” name.

I get a $3 Deschutes IPA and a $6 plate of saucissons en croûte with pencil fries: scrumbo smoked kielbasa sausage wrapped in feathery pastry. Seven of them.

People start drifting in. Guess the happy-hour word has spread. Two things get me: how hard these ladies are trying (because this ain’t Fifth Avenue, with its passing hordes), and they haven’t gone all exclusive. People like me can afford the prices. Two customers, Jamie and Laura, share a plate of happy-hour Korean ribs ($8). Looks fabbo, thin-cut across the ribs.

Back at the ranch, it’s a hit. Burger is huge. Marriage is saved.

Regal Beagle
By Barbarella
Sausage and beer seems so...German. But the Regal Beagle manages to make it as American as burgers at a barbecue. One of the first things I noticed walking into the place — situated on the corner of a strip mall off India Street — was the mustard station.

The reason I was so taken with this station is that it contains no-pretense: giant tubs of straight-up American classics like Heinz ketchup and French’s Honey Mustard. There are a few fancier flavors, but seeing the standards (my personal favorites) appealed to the little 4th of July freak in me.

The sausages are more like exotic hotdogs. I had the jalapeño cheddar, with grilled peppers and caramelized onions on top, flavors I destroyed beneath a layer of Heinz and French’s.

Instead of fries, the dogs — I mean, sausages — come with freshly made potato chips. Crispy, salty, perfect with beer. Oh, right, the beer. Nothing on the wall was sweet, chocolatey, or Belgian enough for me, but the selection is impressive for all you beer lovers. If you can’t decide, you can spin the wheel of beer which hangs on the wall and leave it to the fates.

I went with a dark Imperial Stout. David got a Double Dog from Flying Dog Brewery.

One reason I’ll be back soon (aside from those tasty not-dogs) is the communal atmosphere. Games are available to play, and the long communal bar with stools in the middle of the room is conducive to socializing. We struck up a fun game of Apples to Apples with the couple seated beside us at the bar. ■