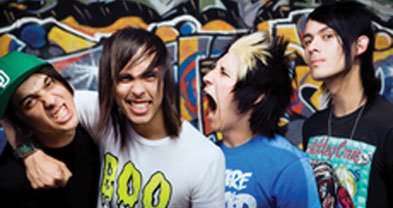 Fearless Records, a California-based alt-rock label, has announced the signing of homegrown rockers Pierce the Veil.

“We are excited and grateful to be part of the family,” says singer Vic Fuentes.

Pierce the Veil was formed in 2006 by brothers Vic and Mike Fuentes, but the band’s roots go back to Mission Bay High School. While students there, the Fuentes brothers played in the punk band Early Times. “That’s the band that we signed to Equal Vision Records,” says Fuentes. They grew a little cult following, mostly of surfers and skaters. Early Times played backyard keggers and over time they improvised “5.9,” a song that made reference to the alcohol content of Natural Ice beer. “Natty Ice,” he says, “was my high school beer.”

Early Times became Before Today. As such, they released the somewhat prophetic A Celebration of an Ending in 2004, also on Equal Vision Records. When Before Today disbanded, the Fuentes brothers began honing the songs that would eventually become A Flair for the Dramatic in the studio that their parents had built for them in their home near Mission Bay. The addition of Tony Perry and Jaime Preciado made Pierce the Veil complete.

The band continues their live attack this fall with a tour of South America in September with Sum 41, Four Year Strong, and Attack Attack! The band then heads to Europe before kicking off the “No Guts, No Glory” Tour this November with Miss May I, Woe Is Me, LetLive, and the Amity Affliction.

Pierce the Veil has a homecoming gig scheduled at Soma November 12. “We don’t really do the 21-and-up thing,” says Fuentes. “Our fans are younger than that.”