Last month, I made my way down to Offshore to meet Tommy Gomes face-to-face, drawn to a culinary-education phenomenon called Collaboration Kitchen. I’d heard Gomes’s name before, most often from chefs on their way to pick up some plump uni. They all claim there’s no better place for fresh seafood than Gomes’s Morena home: Catalina Offshore Products. 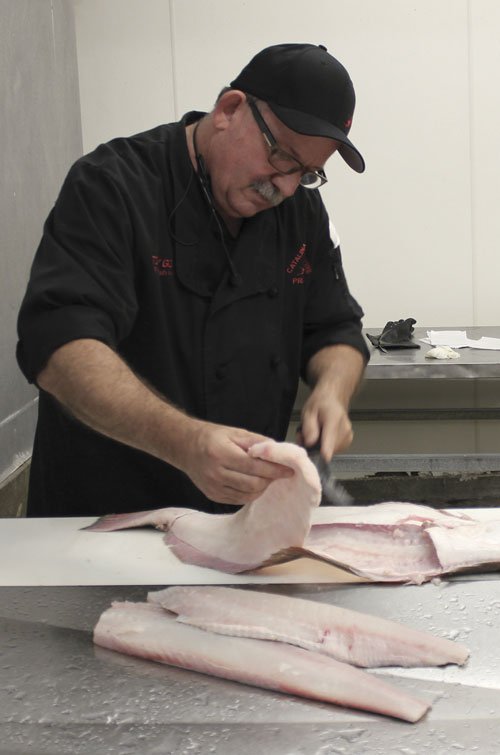 Tommy Gomes from Catalina Offshore, the organizer of Collaboration Kitchen, butchering a halibut onsite before marinating it and offering it up during the session

The business was closed — it was Gomes’s night off — but he led me into a warehouse filled with rows of folding chairs and happy people talking about food while drinking wine and beer. Su-Mei Yu, the instructor for this edition of Collaboration Kitchen, is the owner and culinary mind behind Five Points’ popular Thai restaurant Saffron, and over a two-hour period she took us through the preparation of traditional Thai dishes, including hoh mok pla (fish custard steamed and served in banana leaf pouches) and savang wah (an Asian ceviche made zingy by the addition of Thai bird chilies). Laughs were also on the menu as Yu explained the importance of gossip to the final flavor of a good chili paste, advised students to roll kaffir lime leaves “like doobies” before chiffonading them, and explained the cosmetic uses of everything from coconut milk to limes to lemongrass.

The setting for Yu’s oration was a long table outfitted with culinary equipment and a picturesque arrangement of pristine ingredients donated by Specialty Produce. For those of us toward the back, Yu’s voice, image, and actions were amplified by cameras, large screen monitors, and a headset-equipped mic pack. Sous chefs worked behind the stage to prepare portions of the dishes on Yu’s syllabus.

Yu explained that Gomes had helped her daughter while Yu was out of the country; it turns out that for many of the chefs who’ve presided over Collaboration Kitchen events — Chad White (Sea Rocket Bistro), Amy DiBiase (The Shores Restaurant), Julie Frans (Dining Details), Mitch Conniff (Mitch’s Seafood), Brandon Parry (chef to the admiral of the Western Pacific Fleet), Jenn Felmley (a local private chef), and a slew of others — personal ties to Gomes were the initial impetus.

Always on the go, making and linking connections within the local food and restaurant community, Gomes is the reason Collaboration Kitchen exists. Last November, he shared his idea while chatting with the CEO of Catalina Offshore and an outside consultant. Both felt it wouldn’t work. According to Gomes, that’s the worst thing you can say to him.

They made him a bet — five dollars and bragging rights — and six days later, the aforementioned Chef Frans was front and center on the floor of Catalina Offshore, giving the first of what has grown into a series of instructional presentations for commercial fishermen, Slow Food Urban San Diego members, and a number of Gomes’s friends and colleagues. More a party than a formal teaching event, it took off from there. 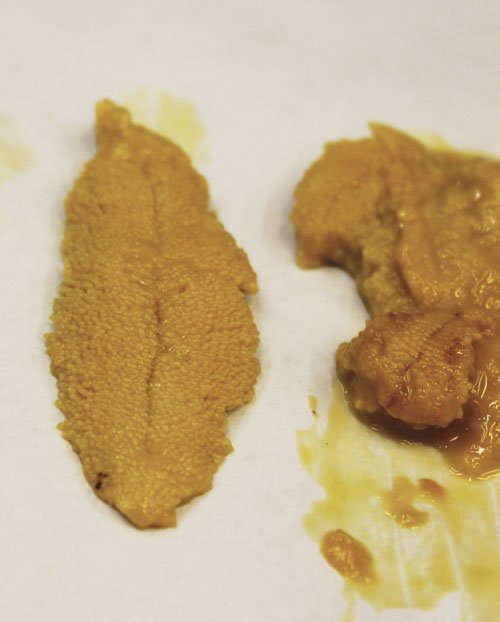 Uni (sea urchin roe)...an expensive delicacy, but everybody got a big piece of the delicious stuff just for showing up

Now in its 19th iteration, Collaboration Kitchen draws 70–100 attendees per event. Everyone dines on portions of the recipes prepared by the presiding chef, enjoying them with whatever beverage — adult or otherwise — they choose to bring. In addition to the main presentation, Gomes and his Catalina Offshore compatriots serve up education about responsible fishing practices, seafood species, and culinary techniques. They also offer goodies in the form of fish pulled from the cooler and butchered on the spot, and, on the best nights, fresh uni.

Many would find the chance to savor the buttery, oceanic flavor of sea urchin roe and soak up Yu’s food-based beauty tips the main draw of this series. I did, until I discovered that, from day one, proceeds have benefited the Monarch School, a Little Italy–based institution that provides educational resources to children impacted by homelessness. In the near future, a portion of the proceeds will also go to low-income children who need prosthetic limbs. Gomes’s brother deals in prosthetics and will facilitate purchases, fitting, and transitional assistance for these children at cost.

Fresh seafood, entertaining chefs, epicurean camaraderie, and bring-your-own-booze privileges are great, but the chance to help out a good cause is even better. You should check it out. ■

Collaboration Kitchen is so much more than a foodie event or cooking class. as a foodie and a veteran of probably close to 100 cooking classes I have to say that this unique event brings together much more than seafood and chefs. Take a look at any audience and you will see fishermen and women and their partners- it's all about the sustainability and the sport of fishing, and the dedicated home cooks looking for a tip on a new way to prepare that fish that just came home for dinner.

Yes, the foodies like me are there too, but there's also more men at this happening then I have ever seen at a cooking demo. And Tommy and the guys at Catalina would rather die than butcher the wonderful fresh product they sell to top restaurants and chefs. - and increasingly to those of us willing to go beyond salmon and ahi - I'd call it sashimi like you never dreamed- unless you spend time out there on the boats or in a wholesale fish market. The event takes place in a wholesale fish warehouse. The chefs are challenged to prepare Dishes with the most plentiful and often challenging ingredients- they haul a big old fish 3 or 4 ft long out of the fridge for the sashimi demo. Wowsah! It's Buon or bring it and share. You can also take home some seafood at special prices that evening. It's not a fancy pantsy happening- it's fun and casual and entertaining and yummy and educational. If you've never gone to one, get on the mailing list. I guarantee you be back more than once. And oh yeah, they have retail hours, if you can sneak down there during the work week and I think on Saturday mornings. Tommy does spontaneous cooking demos. Love seafood? What do you want? They got it- or something new you'll like even better!