“Have you decided?” Angelo asks. Can see he’s getting stressed by the growing line. 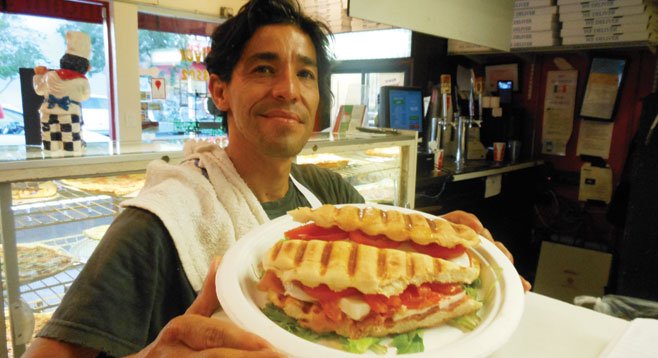 My buddy John turned me on to Landini’s. He works at Caffe Italia, farther down India Street, here in Little Italy.

It was a couple of months back. Friday evening. Spotted John and his buddy up on a deck that was jutting out from he hillside behind a long, chocolate-brown building. The building had a beautiful blue mural of a fishing boat on one side, and below that, a sign and an arrow leading the way to the “Patio.” Below that, another sign: “Landini’s Pizzeria.”

I puffed my way up to where John was drinking a beer and working through a couple of slices of pizza. A little fountain gurgled away on the deck. There was a spectacular view of the sun setting across the bay.

Been thinking about it ever since. Like today. I’m walking up India around 5:00 p.m. Little Italy’s crowded, everybody sauntering around, sitting down at swanky joints, meeting friends in the two little piazzas. I pass Trattoria Fantastica, Sogno di Vino…all above my pay grade. Sigh.

Then I recognize the chocolate-brown building.

I’m starving, willing to give Landini’s a try. It’s a crazy building: red tables with red umbrellas, and the red, white, and green Italian flag everywhere.

I follow a crowd sluicing in through bright red doors. Guess we’re all getting the same sunset munchies.

Inside, there’s a display cabinet full of pizza slices, and just behind the display, pizza-making in the kitchen. It reminds me of Luigi’s in Golden Hill. Like Luigi’s, there are about a dozen different kinds of sliced pizza pie on display, with names like Ponte Vecchio (which has pepperoni, sausage, bell peppers, mushrooms, onions, and olives) and De Medici (sliced tomato and garlic) — Luigi’s pizzas have names like that, too. Turns out this place started life as a Luigi’s branch but changed when the partners split. Angelo, who’s taking orders, says it’s been Landini’s for a couple of years.

Gosh, they’re busy, cooks on the run, checking the three stacked pizza ovens, rushing to the back of the kitchen to make sandwiches or pasta dishes, bringing them to customers. Gustavo, the night pizza-cook, slides his giant wooden pizza peel (paddle) into the middle oven and hauls out an 18-inch Ponte Vecchio. He slides it into a box.

Carlos, the cook who specializes in pasta, hefts a three-inch-high panini sandwich. “The Fiorentino,” he says when I ask. “It’s $8. Has prosciutto, mozzarella, tomatoes, oregano. We bake all our own breads, and we import all our meats from Italy.”

Purists will be happy.

Next, Carlos removes from the oven something that looks like a puffer fish made of bread. Turns out it’s a calzone. He says it has three cheeses inside — mozzarella, parmesan, ricotta. Costs $8.50.

They also have straight spaghetti dishes, like the Bolognese for $8.50. Or the $9.50 Chiantigiana — spaghetti with Italian sausage and vodka sauce. Both sound like good belly-fillers. 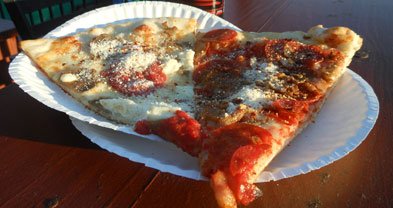 My two slices: meatballs, ricotta, and marinara; pepperoni, sausage, and meatballs (the “Sopranos”)

Pizza’s mostly $3 a slice. But there are daily specials. Two pizza slices and a soda for $6. Or one slice with house salad and a soda for $6.50. Or my friend John’s option, two slices and a draft beer — including local beers, like Stone IPA — for $8.50. And that’s with tax included. These are real deals. Heck, you’d pay $8.50 just for the beer on the rest of this street. I spot a handwritten sign propped on the counter: you can also get a slice and a glass of wine for $8.50. Cool.

People are coming in and lining up behind me. I have to decide.

I go for the two-slices-and-a-beer deal. But which two slices?

“What’s the most interesting?” I ask Angelo.

“Okay. What’s the most popular?”

That causes a conference among the cooks. “Spinach and ricotta,” Angelo finally says. Which is surprising. Pepperoni, you’d expect — it’s usually first on any pizza menu.

“Have you decided?” Angelo asks. Can see he’s getting stressed by the growing line. “Personally,” he offers, by way of encouragement, “I like the meatballs, ricotta, and marinara. And the pepperoni, sausage, and meatballs. That one’s called the ‘Sopranos.’”

He starts to pour the beer, but all he gets is froth.

“It’s not cool enough down in the cellar,” he says. “Would you like to choose a bottle?”

That’s nice. I’m sure the bottles cost them more than the draft.

I choose a Stone Pale Ale and wait while he takes the two slices of pie from the display case, puts them into the oven, then, a minute later, hauls them out steaming hot and slides them onto two paper plates.

I carry everything through the side door and up to the deck, where a couple’s sitting near the fountain, sharing a pizza with — New Yorkers: skip this bit! — pineapple on it. The Piccante: ricotta, pepperoni, jalapeño, pineapple. Pineapple on a New York pizza? “Look, we’re from Halifax, Nova Scotia,” the lady says. “We have to make our own pizzas there. This is a luxury.”

I settle back with my beer and two slices — nice thin crust, plenty of tasty stuff on top — and watch the sun changing all the colors on the bay below. At last, somewhere in Little Italy to take Carla without busting the bank. Meal and drink for $8.50? Hereabouts, that’s a little miracle. ■