I once bought a half-pint of whiskey with a fiver I borrowed from a colleague in a 12-step program. 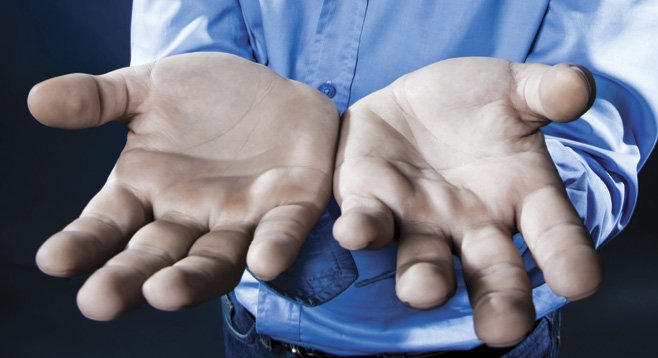 I am constantly revising my own rules regarding panhandlers. I can’t seem to stick to one policy with any consistency. For a time, my rule was to give some money — never a great amount — only to women who appeared disabled or debilitated in some way, certainly if they were elderly or any of whom were impaired in some way, physically or mentally. Any women with children as well, but I encountered only one such case, the young mother of a young girl. My generosity and wallet permitted up to four dollars on that occasion.

Another proviso, the one I still maintain, mostly, is not to give money to young men who have every appearance of employability at something or other. I do, however, refrain from saying, “Get a job!” because, who knows? Maybe the guy’s spine doesn’t go all the way to his brain.

I do try to avoid being a tight-assed jerk, because, while I have never exactly stood on a corner asking for spare change, I have borrowed $2 or $5 here and there from friends and on one or more occasions, coworkers. This usually goes for coffee or a sandwich on the day or two before payday, but I once bought a half-pint of whiskey with a fiver I borrowed from a colleague in a 12-step program. In return for my imposition, he went out and bought me a $20 gift card for Starbucks without my paying him back for months. I must get him a gift in return, but I don’t know what he likes. We are that close, you see? This may not constitute panhandling, but how much closer can it be?

I saw a bus the other day, and on its side was a message printed in block letters, “The words homeless and veteran should never be used in the same sentence.” This sounded more like a rule of grammar to me rather than an appeal for sanity in regard to servicemen returning to civilian life. And I admit I have a sympathetic prejudice toward combat vets, who I think I can recognize due to what has been called that “thousand-yard stare.” But what am I gonna do, ask to see their discharge papers? I’ve seen crackheads with that thousand-yard stare.

I’ll tell you about one young man of the type I just mentioned. This guy was maybe 24. This was in front of the Hard Rock Café, downtown, where the young turk squatted next to, I assumed, his girlfriend. The young lady had tattoos covering her calves, forearms, biceps, and neck — a lot of flowers and some iron crosses, death’s heads, and a puppy dog, with the words “mad dog” inked beneath the little fellow’s representation. They were all pretty good tattoos. Her hair was dyed in a color that does not occur in nature. The guy looked fairly normal, with an Ozzie Osbourne T-shirt and acceptably bleached-out jeans. His tennis shoes matched, looked fairly new. He was making an effort at a nascent beard. Hair, medium long. He looked like he could be a longshoreman, an ironworker, or a bricklayer’s apprentice. He held a sign that read, “Homeless and hungry.”

His girlfriend called after me as I walked past, “C’mon! You got money. I know it. Hey, c’mon, ya bastid!”

Moving to Market and Fifth, I heard a guitar player nearby. He was standing on the corner playing a Yamaha acoustic, not terribly well, but okay. His voice was ragged and drifted off key. He looked to be about my age and definitely had that thousand-yard stare. Ponytail, gray; goatee, same; aviator shades. It was what he was playing that caught my attention. It was, “I used to be somebody/ but now I’m somebody else,” from the movie Crazy Heart. I loved that movie and its music. As I got closer and put a dollar into his gig bag, which held another eight bucks or so, he started another song. At first I thought it was “Nobody Knows You When You’re Down and Out.” Similar chords, the way he did it; but it was actually the old Depression song “Brother, Can You Spare a Dime?”

He sang, “Once in khaki suits/ Gee, we looked swell/Full of that Yankee Doodley Dum,/ Half a million boots went sloggin’ thru hell/ I was the kid with the drum. Say, don’t you remember, my name’s Al. It was Al all the time/ Why don’t you remember? I’m your pal./ Brother can you spare a dime?”

Turns out he was 82nd Airborne from ’69 to ’71. He was half deaf from a mortar barrage, which accounted for his playing and singing that kept going off the rails. I gave him a picture of Abraham Lincoln.