After Hillel of San Diego purchased a parcel for a UCSD facility, the La Jolla Shores Association and a group of La Jolla residents sued the City of San Diego in June 2006. The San Diego City Council had voted 6-2 in May 2006 to sell Hillel the .76- acre site for $940,000. The sale was later upheld in court. The La Jolla Shores Association's president then was Sherri Lightner, before she became councilmember for District 1.

The Hillel UCSD Center for Jewish Life would encompass 6600 square feet, plus parking, in a park-like setting. Taxpayers for Responsible Land Use (TRLU), a registered lobbyist organization, also opposes the plan. The group cites traffic and parking concerns, community character, and improper land use (including being in a single-family residential zone). Their website states: “The proposed student center is six feet higher than any other structure in the adjacent residential community, and nearly three times the size.”

The La Jolla Shores Permit Review Committee, at its January 24 meeting, will review the project specifics. Hillel is currently housed at 8976 Cliffridge Avenue, adjacent to the site. In an email, TRLU spokesman Oliver W. Jones said, “The La Jolla Shores Planned District Ordinance does not allow office uses in a single-family residential zone. Hillel has been in violation of this ordinance for approximately 10 years.”

Robert Lapidus, Hillel's facilities committee chair, emailed: “There is no active code enforcement action pending,” and the project “is supported by dozens of homeowners in the immediate neighborhood.” Lapidus is “optimistic we will have majority support as in three previous City Council actions.”

Steve B., a San Diego notary public familiar with the Hillel organization, said, “There are many non-Jewish denominational organizations like Hillel that meet off campus in similar buildings with no controversy. The real reason behind the 'smoke and fog' of zoning, aesthetics, and traffic/parking issues is an underlying anti-Semitic tone.” 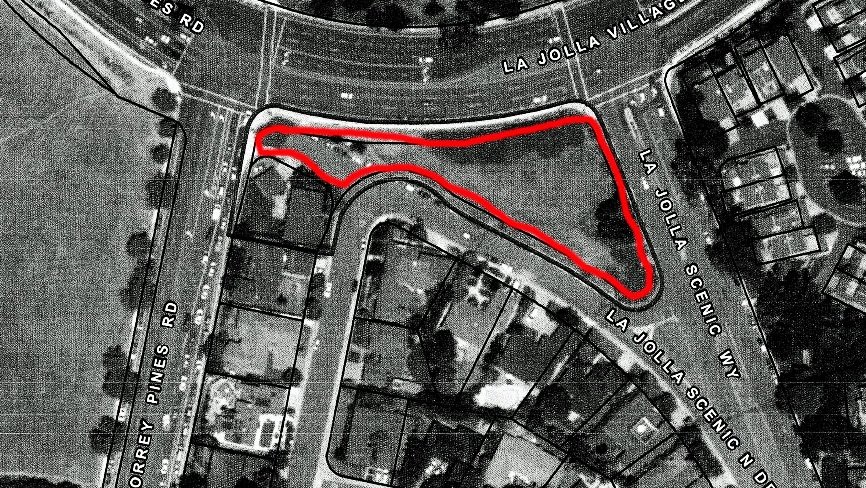 The red outline shows the 3/4-acre site on which the center would be built.

The San Diego City Council is not close to a final decision. A court-ordered environmental impact report must be completed in 2012. And then there's the San Diego Planning Commission review. Lapidus said the environmental report “will help as it will definitively address all of the relevant issues.”

Interesting story, I've driven by this property and it's a good chunk of land. It seems like the homes across the street from the proposed building might benefit from it. A well designed building, and park like setting might also buffer some of the noise from a very busy street and be an asset to the neighborhood. It doesn't seem like a building six feet higher than the surrounding ones would make much difference.

I'd sure welcome it in my neighborhood.

Right now the parcel serves no useful purpose. It's not set aside as a park. So development would certainly be an improvement. And why a facility for Jewish students is so vehemently opposed does make one wonder about some of the organized opposition.

stories such as this one are indicative that, as a people living in the greatest country in the world, we have a v e r y long way to go.

people, we are all one - when we bleed it is RED.

Now now. La Jolla land use battles get idiotic very often. We have the Seal Pool and the Cross for starters. Teach me on this, would Rabbi Hillel respond to a neighbor's complaint with an attack on their character? Or would he listen patiently to friend and enemy alike? Would the Rabbi ask for exemption from laws neighbors obey?

Don't trivialize anti semitism, don't try to win a bar fight with a hand grenade. This concerns land use laws. Half that hillside would build a Romneyesque mansion if allowed.

That said, the proposed center seems a good use.

It's true, don't trivialize antisemitism. And don't use that label if you have no idea about the realities of the monstrosity planned for this single-family home neighborhood. Why would the families across the street welcome more traffic, more noise, and less parking?(the proposed parking for Hillel is woefully inadequate) And the reason there's no park there is, in part, because the city of San Diego sold the land in a back-room deal that went against the registered, code-approved use of the land. Neighbors have offered, for years, to turn it into a park. City denied them! I hope that the true usage of the land will triumph (the City has told Hillel they can sell back the land at the original price), and I hope that Hillel finds a home for its large and undoubtably popular student center--it's going to be hopping during finals, study days, as well as on holy days

I've looked at the proposed design, and it is hardly a "monstrosity." As for limited parking and traffic increases, many students will walk or bike there, since it's across the street from UCSD.

Public land with potential for public use, sold cheap for religious purposes? An end-run around the First Amendment?

The La Jolla Community Planning Association overwhelmingly voted against the facility in June. The San Diego City Council will make the final decision. Hillel emphasizes that their proposal includes a small park ("landscaped with California native species") with pedestrian and bike trails open to the public.

Update: The project is still alive, but now has a revised environmental impact report. You can read/download the PDF file here: http://bit.ly/Hillelredux Comments are due by January 28, 2014.