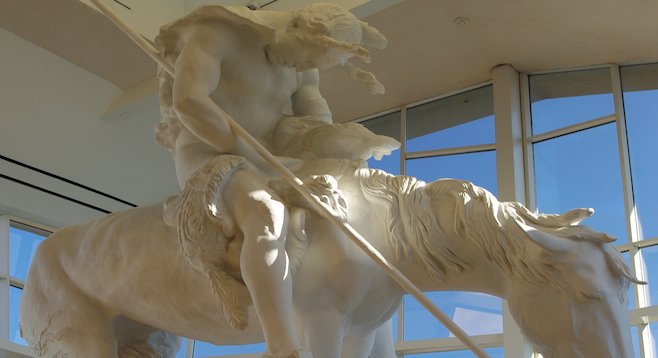 The last time I'd been in Oklahoma City was as a 6 year-old child. My family was passing through on our annual road trip from California to Indiana to visit aging relatives. What I remember vividly is how the earth was a brick red and how it stuck all over your shoes and stained your socks. That was many years ago.

So it was with eagerness that I returned here, this time pushing an age similar to that of my once “aging relatives.” The difference is that I was going there to find more than red dirt: I was going to discover the heartbeat of the Midwest.

By the end of my trip I was overwhelmed with a city that has more than I ever knew. From history, culture and patriotism to cowboys and Indians, Western heritage and waterways, I experienced Oklahoma City as a vibrant city worth repeat visits. Who knew?

I recommend the following four stops as “must sees” while you’re in Oklahoma City:

More than 10 million visitors from around the world have visited this premiere museum of cowboy culture and the American West. With over 28,000 pieces of art and artifacts, the displays offer a visual foray into a time that helped shape the West.

The museum's Prosperity Junction appeals to families and represents a frontier town at dusk, including an outdoor jail complete with sights, sounds and smells. One of my favorites was the American Rodeo Gallery, where rodeo history and memorabilia help bring this Western staple alive.

No matter how much you try to prepare yourself for this haunting tribute to the victims and survivors of the April 19, 1995, Oklahoma City bombing, you’ll still find it difficult to escape the raw emotion of that dreadful time. Relive the event through a recorded hearing, artifacts and other remembrances.

The Field of Empty Chairs tugged at my heart. One hundred sixty-eight chairs stand in nine rows to represent the nine floors of the destroyed Murrah Building. Heaviness hung in the air – or maybe it was heaviness in my heart – as I viewed the empty chairs, noticing that some were shorter. (I later found out that the nineteen smaller chairs represented the lost lives of children.) The chairs are lit at night and represent a poignant photo opportunity for those who can return after dark.

Then there is the Survivor Tree, an American Elm that somehow survived the inferno and flying debris of this act of domestic terrorism. As I walked around the encased solitary survivor, I read an inscription dedicated to those who helped: “To the courageous and caring who responded from near and far, we offer our eternal gratitude, as a thank you to the thousands of rescuers and volunteers who helped.”

The world’s largest live cattle auction takes place in Stockyards City. But that’s not all; it’s also one of the best places to shop for authentic Western garb, including Langston’s Western Wear – the oldest Western wear store in Oklahoma. Then there’s the best steakhouse in the West, Cattlemen’s Steakhouse. It’s been voted “Best Steakhouse” in Oklahoma for the last 14 years.

Across from Cattlemen’s Steakhouse is Oklahoma Native Art & Jewelry – one of my favorite stores. Owner/artist White Antelope and jeweler Mariano offer unique turquoise jewelry, art and other items. Needless to say, I brought some turquoise treasures home with me.

Once a run-down warehouse district, Bricktown has been converted to the city’s hottest entertainment and dining district, with bustling restaurants, dance clubs, live music and waterways.

Ride the water taxi on the romantic mile-long Bricktown Canal as it winds through waterways. During your cruise, admire the Oklahoma Land Run statues depicting this 1889 frenzy – slated to be one of the world’s largest bronze sculpture parks when completed. Then ask your helmsman to drop you off at Toby Keith’s I Love This Bar & Grill restaurant for some of the best chicken-fried steak ever.

From here, it’s a quick, safe walk to any number of downtown hotels.

I absolutely agree with your recommendations. Oklahoma City has alot to see and experience. The Cowboy Museum is fascinating even if you do not have an interest in such things. Amazing statues/sculptures around it.