Birria in the Barrio 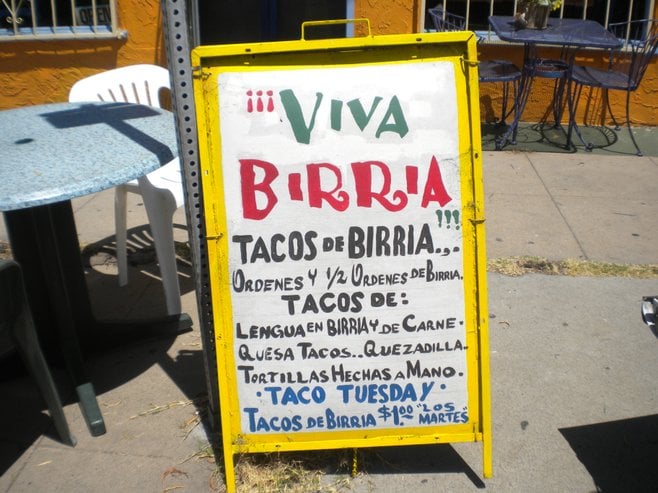 Call it the next best thing to Mexico.

I’m in Barrio Logan, walking down Beardsley, past the Logan Heights Family Health Center Clinic. What I like — apart from the clinic and the half-dozen apartment blocks they’ve built recently — is how everything is small-scale, low. You don’t feel like an ant on the streets.

As I’m crossing Newton on Beardsley, past the beloved New Mexico Cafe (1794 Newton Avenue), I notice a little place that’s like an extension of New Mexico’s back end. Has a mural on the outside, green tile roof, orange stucco front. A plastic canvas banner reads, “¡Viva Birria!”

Hmm…the last time I ate birria was at the Mercado Hidalgo in Tijuana, the town’s most interesting market. About half the stuff there arrived from farther south, along with most of the food traditions. The carne en su jugo (“meat in its juices”) and its first cousin birria came straight from Guadalajara, or so I’ve been told. Down there, they love goat. 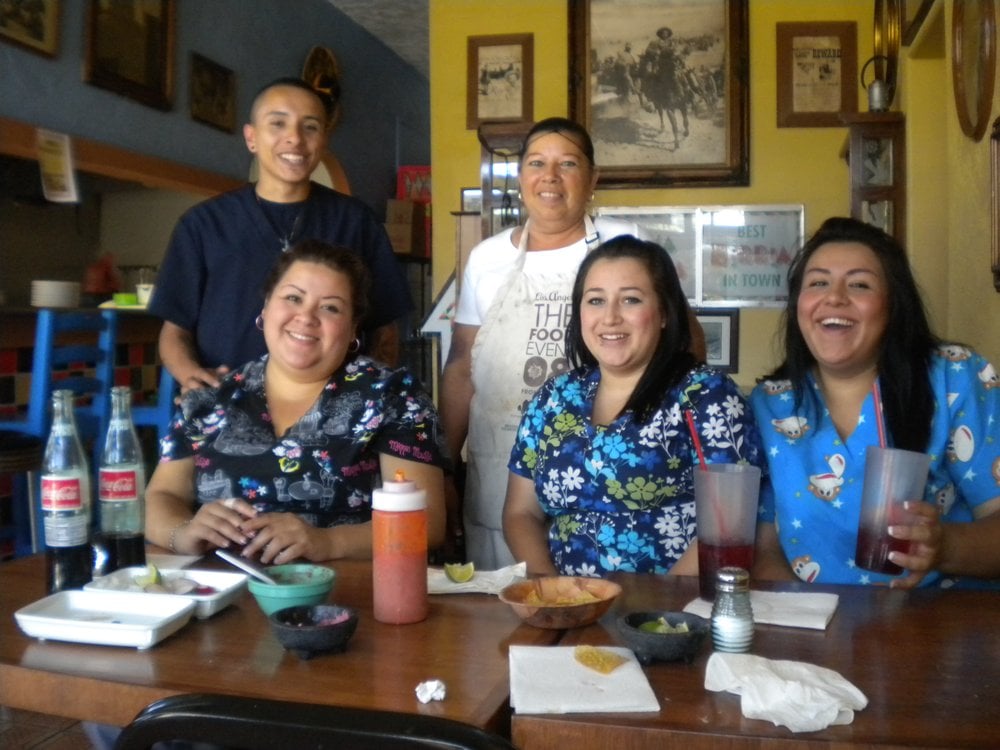 Victoria, in white, says, “On this side of the border, people don’t really like the strong taste of goat.”

And yes, I loved it, too, even though it was kind of gamey. Purists say that even though people replace goat meat with lamb, mutton, beef, or even green iguana — they do that down in Colima and Jalisco — chiva is the only real thing if you’re gonna call a stew birria.

Plus, they say that if you eat the meat of that famously randy animal, you’ll reap, uh, benefits. Aphrodisiac? So it’s gamey: I’m game.

These thoughts race around my head as I walk through a set of cowboy-saloon doors.

Inside, it’s a clay-yellow-and-gray room with sepia-toned photos from the Mexican Revolution scattered around the walls: a Pancho Villa portrait; charros with rifles sitting on the cowcatcher of an ol’ steam engine; Villa on horseback at the head of a column of revolucionarios with pack mules and artillery. You feel like you’re somewhere south. Guadalajara, maybe?

Victoria, the bustling lady who runs this, insists her birria is real, even if she doesn’t do goat meat.

“Okay, our birria is made with beef. On this side of the border, people don’t really like the strong taste of goat.”

She says everything else is the same, ’specially how it’s made from a base of dried roasted peppers. She has two sizes for the basic birria — the full bowl and the half. Full’s $7.50, half’s $5.50. They come with fixins and tortillas.

A group of four women and a man have the main table. They’re all eating birria-filled tacos ($1.75 each) and drinking bottles of Mexican Coke ($2).

“This is the most delicious birria outside Mexico,” says this gal Darlene when she sees me looking. “And these are the best tortillas to put your tacos in.”

At first, I figure she’s just being nice to Victoria. But no, Victoria says the tortillas are different.

“I dip them in the birria juices,” she says, “the drippings from the beef.” Wow. Gotta try that. The ladies, Darlene, Jessica, Stephanie, Bianca, and one guy, Sergio, have all walked across from the chiropractic clinic in Crosby Square.

“We come once a week,” says Jessica.

I ask for the half bowl of birria and a coffee ($1.65) and go sit in a booth hauled out of the ’50s, I swear. It’s wood, about standing height, with swoopy privacy baffles at head level. My booth’s painted bright blue. Others are salmon and green.

Victoria brings the bowl. Pretty big for half size. It’s a deep-brown soup, steaming and swirling with shredded beef. But it’s more complex than it seems — I could tell from the first smell. Swear you can taste roasted serrano chilies, and it almost feels like there’s wine in there, too, though Victoria tells me no way.

’Course, she’s not gonna tell me what is in there. That’s her secret. She wants people to keep coming here (this birrieria has been open a year) and not someplace else. “Different herbs, spices, chili peppers,” is all she’ll say.

Typical gringo, I’ve already slurped down a third of it when she brings the tray of chopped onions, sliced radishes, pile of cilantro, and wedges of lime. I keep the Gringo Horror Show going by dumping them all in the soup. Victoria turns up with the round plastic tortilla box, four of those hot-dipped corn tortillas steaming inside.

Too late, I hear that the idea is to put the birria meat into the tortilla, add onions, cilantro, radishes, squeeze the lime in, roll the tortilla up, dip it in the soup, and then have at it.

After all this time, you’d think a certified border nut would have learned.

Whatever, the taste isn’t spoiled. Secretly, I prefer this to all that gamey chiva birria I had down in Mercado Hidalgo. Dang. Now I’m wishing I’d told my tightwad, nickel-nurser side to take a hike. I should’ve gotten the full-size, because this ends too soon.

What I really like, I think as I head out the door, is the idea of a single-dish eatery. Birria. They’re staking their reputation on it, so it better be good.

I see a sign pasted on the side of the booth. “Taco Tuesday, birria tacos, $1. Quesataco Thursday, quesatacos, $2.”

I’ll have to come back, see if the birria magic works without the soup support. Oh, yeah, and does beef birria supercharge your, uh, sex life like goat? I can’t wait to find out. ■