Is there really such a thing as luck?

Is there really such a thing as luck? My neighbor seems to keep winning money on scratch-offs all the time and I’ve only won ten dollars every once in a while. I can’t say I’ve ever been lucky but my neighbor is much luckier than I am. 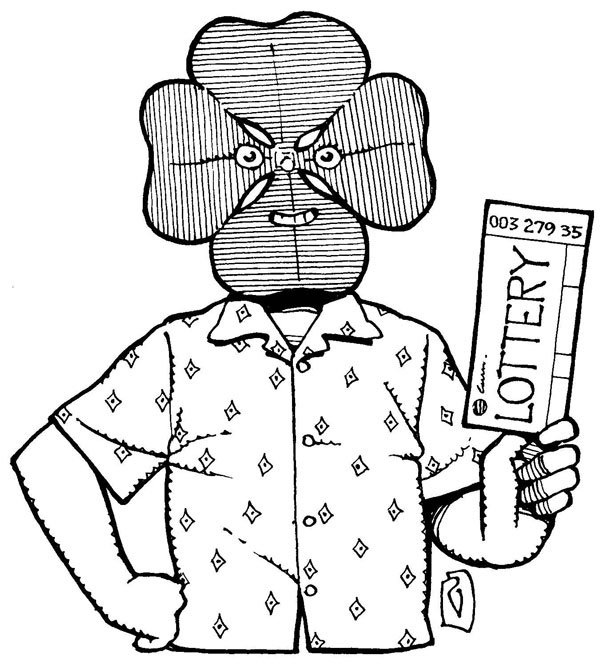 Ooof. Luck. Hmmmm... Well, Grandma Alice always says we’re lucky she continues to do our laundry. And I think I’m lucky that I don’t have any more elves than I already do. But, no, there’s really no such thing as “luck.” Luck is something that lives in our brains, an all-encompassing word that we use to describe real-world events that actually have real-world explanations, even if the explanation is “chance.” Human beans have been fantasizing about luck since we first came down out of trees and needed an explanation for why things happen. We tried to make some sense of seeming chaos. If we can understand it, we can control it, so we’re not as likely to have a coconut fall on our heads or get eaten by a python or other scary stuff like that. Good-luck charms, rituals, rites, mojos, dolls-with-pins-in-’em, chants, “good-luck” gambling superstitions and talismans — all that kind of stuff we’ve dreamed up to try to extract some protection and favor from the gods. We’ve pulled up plants (four-leaf clovers) and mutilated animals (rabbit’s foot), caressed trees (knock on wood), and killed one another (blood sacrifices), hoping to transfer a little benefit from powerful deities, but we’re no luckier now than we were back then. A Gallup survey of Americans found that 72 percent of us have some sort of good-luck charm or behavior; we believe these things affect the future. But science has never identified a force called luck.

The world’s “Dr. Luck,” British psychologist Richard Wiseman, has studied luck, written books about luck, and given us a prescription for living a “luckier” life.

People who consider themselves unlucky, he’s found, are tense and anxious, have a very limited view of the world, are superstitious, are wishful thinkers, and are definite believers in the power of luck (especially bad luck) in their lives. These people, sez Wiseman, should take a cue from people who say their lives might generally be called lucky, though they don’t think luck had much to do with it. Wanna get lucky? Persevere; maximize the chances of your desired result coming to fruition. Widen your focus; see the larger picture, and don’t obsess on details that restrict your vision or you’ll miss an opportunity to make your own luck. Trust your gut; it’s your experience talking to you. Expect a good outcome; your mindset helps control your behavior. Find opportunity in bad-luck situations; don’t just give in to them as your usual bad luck. And because there are so many of us in the world, somewhere there are bound to be people experiencing what we’d consider better luck than ours.

As for you and your lucky neighbor, winning at scratch-offs is chance. Does your neighbor increase her chances by buying more tickets than you do? Is she even telling you the truth? Maybe it’s an evil plot to make you crazy. And over the long haul, your neighbor probably isn’t any “luckier” than you are, assuming you both invest in scratch-offs at an equal rate. There are things that look like “hot streaks” and “cold streaks,” but it’s still nothing more than chance. A Las Vegas casino is Ground Zero for superstitions — which machine to play, which table is your “hot” table, don’t sit next to ladies in red dresses, avoid men who sweat. Naturally, it’s the house that controls the odds on the machines, since they produce 70 percent of their gambling revenues. And card games have their own odds and methods of maximizing your “luck.” But you have to study up to get ahead. And in the end, all games favor the house; you’re behind the eight ball even before you walk in. There’s at least one game machine, a $50 play with one pull that could net you millions, but the odds of winning are more than three times worse than winning a Lotto jackpot. A card counter and well-informed student of blackjack stands the best chance of beating the house. I mean, look around you. Where do you think all those gaudy buildings and lights and fountains come from? That’s all our Vegas bad luck made manifest.

Excellent response. What that means to ordinary folks is that if you meet someone who claims to be a net winner every time he or she visits a casino, you aren't talking to a winner at all, what you have is a common liar. Can't be done, people! The odds against that occurring are not billions to one but trillions. Popular entertainment keeps feeding the public the notion that it is really possible to win big in Vegas or Monte Carlo or Macao or even at your local Indian-owned casino. There are hundreds or thousands of mystery novels out there with the plot lines that are based on the notion that big winners are commonplace, and of course, are also ripe for picking. Gambling provides those mystery writers with material and some excitement that they could not generate from writing about retailing, real estate, or even oil drilling. Too mundane! No, the allure of something for nothing makes for fun stuff to read or see dramatized on TV or in movies, but that doesn't mean those stories could ever happen. And if you think about it, they don't. So, get a grip and get real.

I didn't vote for the GD'd lottery! But we're all stuck with sucker-play every day. At a fundamental level, gullibility is what really separates us from the rest of the animals--and demonstrates their superiority.

I've always assumed I was inferior to smart animals like dogs and dolphins and cute things like otters. I guess I've never thought that I was also inferior to gophers and weasels. But it's something to think about. Have to admit, I've never seen a Komodo dragon buying a lottery ticket.