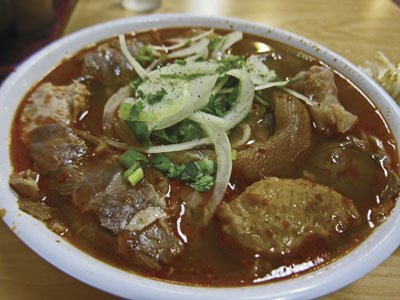 Nothing gets my Vietnamese friends’ blood boiling more than when some foodie calls bun bo hue “spicy pho.” They tell me, “Bun bo is about as close to pho as chicken noodle soup is to ramen.” Different noodles, broth, cuts of meat — heck, even most of the vegetables and herbs that accompany a good bowl of bun bo differ from what you’d end up having alongside your usual bowl of pho.

But a part of me understands the misconception. If you’ve ever tried a bowl of bun bo hue, it’s likely you had it a pho shop; that’s where I had my first bowl. The odds are also high that it was just like most bowls of bun bo I’ve had in those establishments: a base of pho broth, basic pho cuts of meat, chili paste (or sometimes sate paste), and mam tom (fermented shrimp sauce), for that mysteriously savory flavor. Well, at least they use the correct noodles — the spaghetti-like rice vermicelli noodles called bun.

It wasn’t until I set foot in the little casita off Mesa College Drive called Mien Trung that I got it. The backbone of a decent bun bo hue broth isn’t just the spiciness; it’s the pungent lemongrass that gives it a citrus-floral burst, and the sheen of oil colored red by annatto floating on the surface. Yes, there’s that bit of funkiness from the shrimp sauce, but it doesn’t overpower the broth. There’s usually a handy-dandy jar of the stuff on the table, should you want more.

The broth is a made from a combination of pork and beef bones. I’ve been told that traditional broth is strictly beef. However, while visiting Vietnam, I read an issue of Vietnam Cultural Window, which mentioned that bun bo is made nowadays with the pork-beef combination. This makes for an intoxicating aroma as the steaming bowl hits the table. And I do mean steaming. That’s important, because bean sprouts, along with a pile of shredded lettuce and cabbage, mint, and basil are provided; if the broth were a tad too cool, you’d have lukewarm soup on your hands, and not good eats. I do wish that shredded banana blossom was included in the mix.

The slippery rice vermicelli has been spot-on over my many visits, never too soft, and great for slurping. The meat is the traditional beef shank and pork hock, the hock another item that confuses those in the “it’s just spicy pho” category. The soup is rustic and hearty, as are the rough cuts of beef, beef tendon, and a cross-cut pork leg with skin wrapped around a nugget or two of meat. The one item I don’t care for is the jellied blood; I’ve never developed a taste for it.

A regular bowl will cost you $6. The large bowl, which also has cha lua, a defatted pork sausage steamed in banana leaves, tops off at $6.50. The restaurant is tiny. Parking can be found in the lot directly to the west. They accept only cash.

If it weren’t for Mien Trung, Hoai Hue Restaurant would be my favorite. In fact, the beef shank is cut thinner, and the pork hock is more meaty and tender at Hoai Hue. The garnishes used to be superior to Mien Trung, too, featuring more mint and rau ram (Vietnamese coriander: Persicaria odorata ). But on recent visits, it seems to be mostly chunks of lettuce, sometimes lettuce approaching its due date. The broth is less fragrant, and though it holds its own in the chili department, it seems less complex, the heat superficial. I do think there’s a bit less MSG used here.

On some visits, the broth hasn’t been up to the task in terms of temperature, but recently, something nice occurred. I was staring at my woefully inadequate bowl of broth when an older gentleman who works at Hoai Hue walked by and said, “I’ll get you more broth.” He went to the kitchen, returning with a bowl of steaming, almost-boiling broth and filled my bowl up with the hot stuff.

I’ve noticed menu revisions over the last few visits. The bun bo can now be had a bunch of different ways, with different meats, without cilantro or onions, even non-spicy. Which leads to a question: Is it still bun bo hue?

A regular bowl runs $6.50, though I’d spend that extra dollar and go with the dac biet (on special for $7.50), which features good pork meatballs. They don’t have that solid, hard, “squeak” to them, as many versions do. This new location is an improvement over the former, which was in a small, seedy strip mall with eight tiny parking spaces.

There is, of course, more to the cuisine of Central Vietnam and hue than soup. But that’s a topic for a later column. Right now, as the weather turns cool, I’m more than happy with a bowl of rustic and fragrant bun bo hue. ■

Thanks for the word on Mien Trung. I live within walking distance but have only been there once because I had no idea what I was ordering--and didn't like what I was served. It IS a hole in the wall, but that is as welcoming as not. So I will definitely try it again soon. (They have been there for several years, so there must be something good goin' on!). By the way, it's right next to the Sushi Diner (another tiny place) which I recommend not only for the sushi but for the standard Japanese menu items--and the friendly chef and staff.

I went here Friday, 11/11 based on this review. Don't care that it's a hole in the wall, I've eaten in much worse and had much better food. Had the Bun Cha Gio Thit Nuong and husband had Bun Bo Hue. When I got my meal, I tasted one of the Cha Gio pieces, and it was stone cold, tasted of old grease, and was gummy mush inside. So obvious it had been sitting there for a long time. I guess they figured I wouldn't know any better. The waitress never came back to check on us so I had to pick out the rest of the pieces and take them up to the front desk to ask for a freshly made one. She apologized and brought another out, it was hot, but the inside again was gummy and no discernible taste, just mush. Gave one to the husband to taste (with no comment so I wouldn't influence him) and he said the same thing. Pork was super fatty, and not in a good, grilled, crispy pork fat way, but a cold, white, flabby way. Overly salty. In all, the worst bowl of Bun Cha Gio Thit Nuong I've ever had. Didn't taste husband's Bun Bo Hue but he said it was mediocre at best. Did they know you were a restaurant critic or something? What we got for food sure didn't impress us at all, unless you count the several times later in the evening I was "reminded" of the greasy, salty mess. Not recommended at all.

Sorry you had a bad meal marybethabate, though I've never had the Bun Cha Gio Thit Nuong there, that's not really a Hue type of dish. Years ago, I recommended Mien Trung to someone from Hue, this is her email to me:

"My sisters and I only get together about once a year and usually it is during the Thanksgiving week. This past month, I forwarded your post about Mien-Trung restaurant to my sisters with a short message "we will go here when you come".

Last Sunday, the three of us excitedly got to Mien-Trung. You should have heard the way we ooohed and aaahed at each item while looking at the restaurant menu (You probably would have thought we had not eaten real food in years). We ordered a feast of bun bo Hue (special large bowl of course), bun rieu, banh nam, banh bot loc, and banh beo.

What a tasty lunch we had. The bun-bo at Mien Trung tasted exactly like it is supposed to taste. The banh beo tasted like the afternoon snacks I used to eat at food stands in central Vietnam over thirty years ago. But the star of the meal was the banh bot loc, we absolutely loved the generous portion of the filling, its slightly chewy dough, and how they used meat broth rather than plain water to flavor the dough.

After the meal, I got up to pay but what I really wanted was to hear the cashier’s accent so I could locate his origin. Unfortunately, the cashier was a high school age young man who spoke to me in 100% California accented English. As we leave, my sister pointed to the TV and asked the older gentleman behind the cashier about the DVD that was playing in the background. He answered back in his perfect Hue accent. All three of us sisters agreed that there had to be a Hue woman cooking in the kitchen."

So no, it's not everyone's cup of tea. But I'm glad you tried it.

I agree, food is a subjective experience. I've traveled all over the world and have eaten my share of dishes that were beautifully prepared, but just not to my taste whether due to cultural differences, ingredients I couldn't get behind, or just my taste buds. But, there is no excuse for serving Cha Gio, or anything else, that has been sitting around long enough to get cold and mushy. They should not serve old, stale food to anyone. Also no excuse for the waitstaff to set the food down and then disappear. It was early, we were the only customers for most of our meal.

Since you are a regular customer there, I'm sure the staff knows you are a food writer. No doubt they give you the best of the best, as well as anyone you send to the place if they are aware of your recommendation. Most restaurants will give regulars a bit of special service as a thank you. Fine by me.

Perhaps they thought the old Caucasians wouldn't know any better, or that we didn't deserve their best effort. I know that sounds harsh, but it happens. While I can appreciate serving Caucasians a different level of spiciness (we tend to overestimate our ability to handle it), my central complaint is about being served food that should have been in the garbage.

I do appreciate your response however. I will continue to try restaurants you recommend. I've been to many, and this is the first time I've had a bad experience at one. Unfortunately it was just so bad I hesitate to give them a second chance.