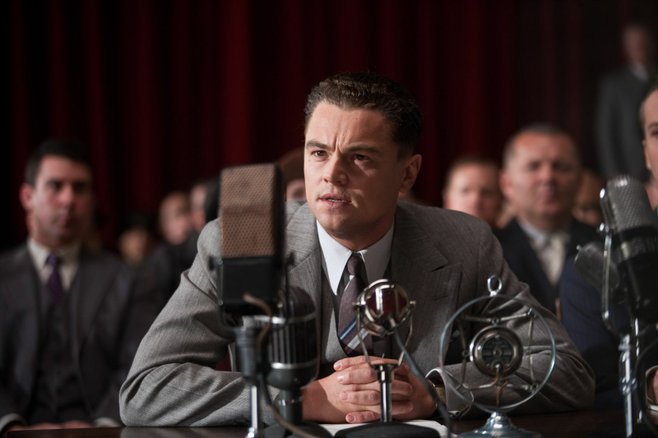 Clint Eastwood’s J. Edgar needs a livelier title. May I suggest Anal-Retention Serenade? In this movie, a young American discovers his anti-Red obsession by finding Bolshevik propaganda flyers on the street and is soon proudly making lists of diabolical Commies. He takes his first significant date to the beautifully lighted but depopulated Library of Congress and woos her with his rushing excitement about the Dewey Decimal System — this pulse-pounder is set to one of Bach’s Goldberg Variations.

The man is J. Edgar Hoover (Leonardo DiCaprio), who is called Johnny by his almost equally obsessive mother (the too-old-for-this Judi Dench). But any hope you might have for this turgid thing to morph into a rollicking, revealing Johnny Dearest will not be rewarded.

In telling the story of the founding father of the FBI, Eastwood digs up the good stuff only to hold it at arm’s length, using tongs of dignified taste if not the strict piety of The FBI Story in 1959 (or the long TV series on the Bureau starring pine plank Efrem Zimbalist Jr.). We find that Hoover was a mama’s boy and even a fella’s boy (more on that soon). He was also a rigid power fanatic who liked publicity and loved going through other people’s dirty laundry. Though too permanently virginal and germ-phobic to even dance with women, he gets his kicks by listening to tapes of famous people having sex.

Eastwood’s Changeling felt more retro and embalmed, but J. Edgar is still fairly museum bound. Tom Stern shot it with a lucid, chill lighting that emphasizes pasty faces, sags, lines, and age spots, even before major makeup takes over DiCaprio as the old Hoover and he starts looking like a wax brother for Jack Nicholson in Hoffa. People seem encased in big buildings, big suits, big notions of their importance, with lots of congressional hearings, furtive meetings, and G-men maneuvers (those lack the crackle of Brian De Palma’s FBI salute, The Untouchables). Clips of James Cagney in ’30s crime films, which boosted the emerging FBI myth, are brief gasps of fresh air for a story already bound, shelved, and turning dusty at the Library of Congress.

The one poignant shot is of the dead, kidnapped baby of Charles and Anne Lindbergh. That fits the film’s essential creepiness. It’s a virtual valentine to an unlikeable man who often seems like a sad, wonky clown even to his agents. DiCaprio, who studied Hoover’s voice and posture, makes him grimly starched and official even before he has any power. He suffers from constipation of the soul (but then, so does the movie). The performance is a genuine piece of work, yet it never rises much above being a tense bundle of mannerisms. It’s a dossier portrait.

One wonders why writer Dustin Lance Black, known for such gay-themed works as Milk and Pedro, is so coy and pinched about Hoover and his tall, dapper associate Clyde Tolson (Armie Hammer). Their friendship, or whatever, is a long wink of stifled desire. Tolson is slightly swish and uses the word “camp” when that was still gay-insider coding, but Hoover barely goes beyond some clammy pats on the hand. His heart belongs to mommy dearest, whose clothes provide him a Norman Bates moment. But he and Clyde keep having old-maid meals together. They seem to be a demure warmup for Richard Burton and Rex Harrison in Staircase.

There is good production design, some time with Hoover-hating Robert Kennedy (Jeffrey Donovan), and the handsomest movie Nixon ever (Christopher Shyer, who snarls the film’s funniest line). As soon as Nixon shows up, mean as hell, you may think: Yeah, please, let’s stick with him! Anything to get out of this marble crypt for J. Edgar Mothball. 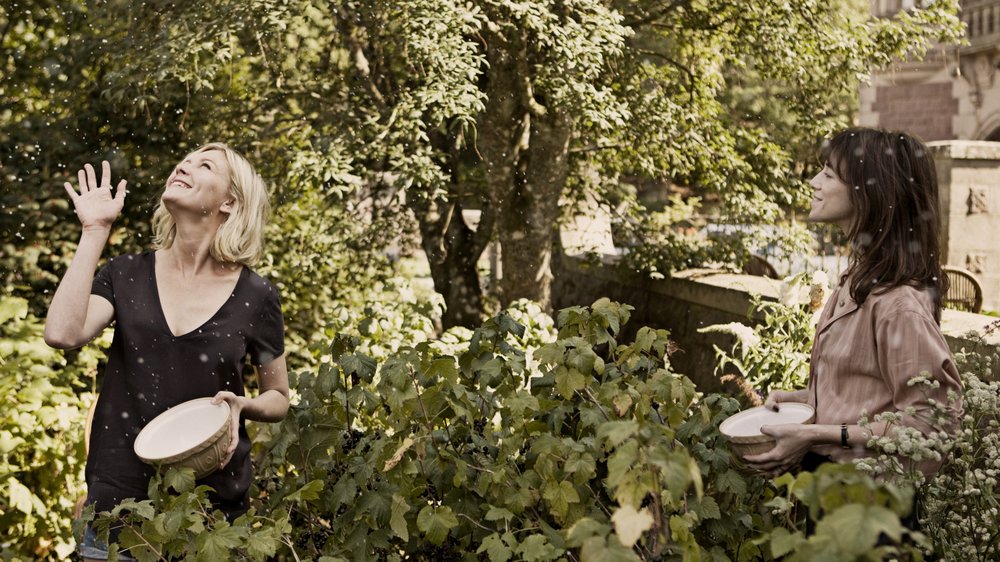 I imagined that no 2011 movie could surpass the pretension of Terrence Malick’s The Tree of Life, but I had forgotten that Lars Von Trier is working. To the last gasp of his vanguard Danish soul, he will fight anyone taking from him the Golden Global Stool of Compulsive Auteurism. The new gift from Von Trier is Melancholia, an art bore of almost definitive solemnity.

Kirsten Dunst, so far away from Hollywood, Spider-Man, and the chiffon Versailles of Marie Antoinette, finally (at 29) looks more womanly than girlish. She performs touchingly as Justine, daughter of a rich oddball (John Hurt), who impishly steals spoons at her wedding. It’s a grand wedding in a baronial castle surrounded by a golf course, the evening paid for by her grumpy brother-in-law (Kiefer Sutherland) and organized by his wife, Justine’s very proper sister (Charlotte Gainsbourg). On hand are Hurt, his bitterly estranged wife (Charlotte Rampling), and Justine’s pompous, nasty boss (Stellan Skarsgård). Also a dull groom who bores her, as she keeps drifting from the rituals to stare at a star, comfort a child, bathe languidly, enjoy impulse sex in a sand trap, and (key moment of audience identification) fall asleep.

Everything feels uneasy, this being a Von Trier movie, and because that star is actually a rogue planet approaching Earth. Sutherland vows that there will be no collision, but he’s like a weather crank denying global warming with a wry, warm chuckle. There is still time for family feuding, horse riding, and a last supper (well, breakfast). Reputedly, Von Trier discovered the works of Thomas Mann and Fyodor Dostoevsky rather lately, but he is already far beyond them in piling bricks of pretension. Melancholia is strangely awful, like a dazed Ingmar Bergman picture lost at a sci-fi convention. The double-planets theme was more gracefully explored earlier this year by the wistful Another Earth.

Von Trier is the thundering ass who made Cannes news by coyly saying that he might be a Nazi. Isn’t the greater folly that he keeps making well-photographed movies clotted with “visionary” nonsense and abstract anxieties? Emily Watson got me through his Breaking the Waves, but Dunst, though charming, is no Watson. Not even Von Trier’s Hitler enthusiasm has wrecked my love of Wagner’s Tristan und Isolde, but by pouring that music like a gravy of gravity over this vacuous dud, he comes close. Is a Nuremberg trial possible for aesthetic crimes?

It was one year ago, on November 11, that Duncan Shepherd wrote his last film column for the Reader, passing the torch of critical sparks to me and my new colleagues Matthew Lickona and John Rubio. We have savored the task, while knowing that we shall never match the 38-year run of Duncan’s trenchant voice for his demanding taste. That is now almost impossible at any print outlet, although the afflicted but tireless Roger Ebert still reviews (44 years!) for the Chicago Sun-Times.

Ebert’s main podium has become the web. The Reader has built a lively film blog, The Big Screen, enriched most often by Lickona and Scott Marks. We are all quite different from Duncan, but each clear voice adds to the cultural chorus and helps keep criticism (and movie interest) alive. Never expect those voices to pursue what Pauline Kael once called, with her usual zip, “saphead objectivity.” Meaning: there is no science, method, doctrine, or dogma of taste.

Speaking of Kael, whom I saluted in a September column on the tenth anniversary of her death, she is having a mini boom. Published concurrently are the Library of America’s Kael compendium The Age of Movies and Brian Kellow’s biography Pauline Kael: A Life in the Dark. There is a fine interview of Kellow by Todd McCarthy, posted on the Hollywood Reporter’s site. James Wolcott’s new ’70s memoir, Lucking Out, is luckily surfing this surge. A Pauline acolyte, with a gimlet eye and a breathless zest for phrase-making, Wolcott leans heavily on Kael tales for the juicy red meat of his book.

Reviewed in the movie capsules: The Interrupters, Like Crazy, The Man Nobody Knew, Revenge of the Electric Car, and Tower Heist.

For as much as Leo looks and sounds like Hoover, they could have cast Denzel in the lead. "J. Edgar," Hoofa!

That film was NOT about the FBI and Capone. Eliot Ness wasn't FBI; he was an agent for the Bureau of Prohibition, part of the Treasury Dept.

Can we please stop tip toeing around this monument to hypocrisy? Looks like Eastwood can't quite pull the trigger on this icon of the edgy right...and that's a real shame.

REMOVE HIS NAME FROM THE FBI BUILDING!!!