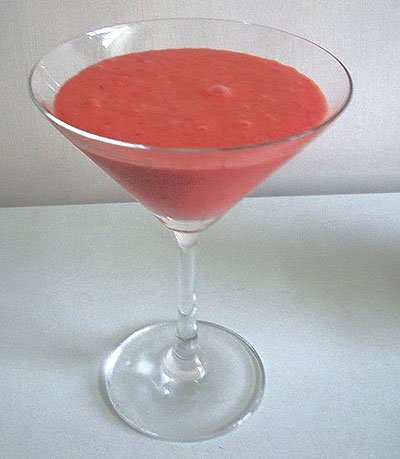 The newest item on South Park Abbey’s menu, the Cause-Mo, is part of the Abbey’s effort to establish a cocktail presence at an establishment better known for its bonanza of Belgian potables. Since unveiling it a little less than two weeks ago, head bartender Adam Neitzke says that the drink has been a bit of a cause celebre among patrons, which he credits to its combination of flavors.

“We wanted it to be a high-end drink,” he says, “and not just something typical or another take on the cosmopolitan.”

Another part of the drink’s success, Neitzke says, is the texture that complements the taste. “It’s a little thicker than most drinks out there. We were trying to achieve that sense of texture because we were going for multiple senses — feel and taste and, of course, sight. It’s got a pretty vibrant color.”

The Cause-Mo out-pinks most pink drinks because of one ingredient — the pink flesh of the black plum. “Plums are one of my favorite fruits,” Neitzke says. “It’s in there mostly because of nostalgia. When I was growing up in Glendora, my grandparents had two plum trees in the backyard, and I just always remember how I ate so many of them off those trees.... We added the mint to give a freshness and crispness to the flavor. We didn’t want to go with the typical cranberry flavor or orange juice. That’s why we went with pineapple. It’s a little crisper, too, and pairs well with the strawberry.”

Kitchen Proof: The Cause-Mo’s billowy texture is counterweighted by the mint bite and rounded tang of the fresh fruit. Keep the bottle of vodka in front of you, though, as you drink, to remind yourself that the Cause-Mo does contain alcohol!

Muddle ingredients into a mash, fill with ice and pour:

Fill with ice, shake ingredients, strain into a martini glass, garnish with three raspberries on a cocktail spike.