As gun battles go in Mexico, it was nothing special. At 11:00 p.m., Friday, October 28, Mexican military authorities and the local municipal police cornered a group of sicarios, or gunmen, in a house located in a working-class colonia. There was an intense balacera, or shoot-out, involving AK-47s and hand grenades that lasted three hours into the night. A gringo recorded and narrated a brief video of the action and posted it on YouTube. The next day, the action began again when the authorities cornered another band of sicarios inside a large supermarket (as big as a Walmart), known as Soriana. There, a second intense shoot-out took place.

The first media accounts were wildly exaggerated, reporting that between the two balaceras there were 200 hostages and many fatalities. When the smoke finally cleared, however, there were only two deaths: a young Mexican marine and one of the sicarios. Two municipal policemen were injured. Two rifles and two pistols were seized. 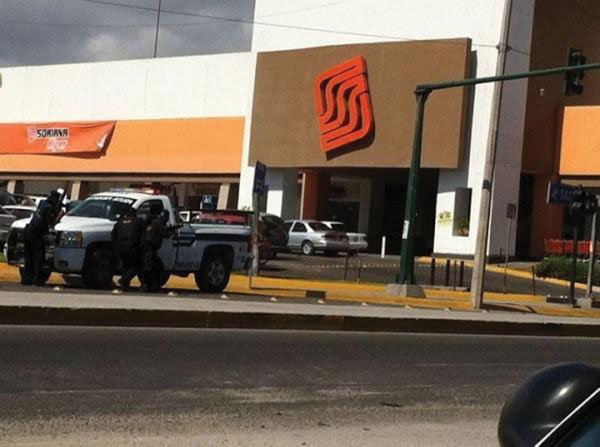 Police officers take cover outside a Los Cabos supermarket, where gunmen held shoppers hostage. One gunman and a Mexican marine were killed.

What made these balaceras unusual, however, was that they had occurred in Los Cabos, the crown jewel of Mexican tourism, which was supposed to be immune to this kind of violence. And it could not have come at a worse time — at the end of the hurricane season, the beginning of tourist season, and just as the local economy was beginning to show hopeful signs of recovery from a long, painful recession. Even worse was the fact that a few months earlier President Felipe Calderón had flown from the mainland to Los Cabos in a fleet of black helicopters (the narcos wouldn’t know which helicopter to shoot down) to officially announce that in 2012 Los Cabos would be host to the G-20 summit on financial markets and the world economy. Los Cabos was going to be a showcase of the new, proud, modern, secure Mexico.

Because it happened on a weekend, local newspapers were slow to respond. But the social network and web message boards lit up like a night at the carnival. “Thank you Calderon for bringing the insecurity to every corner of our country!” one Mexican said.

“Adiós a turismo!” said another. “All the gringos are going to run from Los Cabos now.”

“All the states have their dirty laundry, and you aren’t going to tell me it’s cleaner here,” a cynic added.

Others blamed the recent rise in crime on the hordes of poor laborers who come from Sinaloa, Durango, and Jalisco looking for work. Some xenophobic locals, who call themselves “choyeros” (after a local cactus), believe these workers brought their loose morals and drug-dealing ways with them. If they would simply go someplace else, say Arizona, the Los Cabos migrant problem would disappear.

And then some Mexicans believe that what we are experiencing here is an example of the efecto cucaracha. The term, first used by Mexican General Mújica, implies that when you disturb cockroaches in one place, say Sinaloa, they simply scurry someplace else and begin getting organized all over again. Stirring up the cockroaches in one place does no good — they must be eradicated everywhere.

Is it the cockroach of wealthy people from the mainland who made their money in suspicious ways and now drive around Los Cabos in SUVs with tinted windows and no license plates? This is a cockroach fond of the dark, and it appears to be finding adequate cover here.

Is it the cockroach of low-life narco tourists, who come to Los Cabos seeking drugs and prostitutes, thinking that in Mexico anything goes? This cockroach is native to the United States and Canada, but it arrives daily at the Los Cabos airport.

Is it the cockroach of government officials, who make brilliant speeches and bold promises and then scamper for cover as soon as the shooting begins? (Following the shoot-out, the first official announcement came from the ministry of tourism, announcing that all was safe in the tourist zone now. Where, the Mexicans asked, were the state and federal officials?) This type of cockroach hides under moldy campaign posters or, sometimes, in the folds of a limp flag.

Is it the cockroach of corrupt municipal and federal police, who pretend to protect the people, then take dirty money for protecting only the drug dealers? This type of cockroach is indigenous to mainland Mexico, but it appears to have adapted to Los Cabos as well.

Or is it the cockroach of people with lax moral values, who abandon their religion and engage in irresponsible sex and casual drug use. “Don’t blame others,” one person said. “Look to what you are teaching your children in your own households!”

Perhaps the only government buildings not thoroughly infested with cockroaches are the military barracks. It may come as a surprise to norteamericanos, who are inclined to make light of Latin American militaries, but many Mexicans highly respect their military for being the least corrupt of all government institutions. “God bless the family of that young marine who lost his life,” one Mexican said. “Those brave soldiers are the only people in Mexico with the courage to stand up to the sicarios.… ¡Viva la armada! ¡Viva la ejército!”

At first, many locals who make their living from tourism believed that news of the shootings should be suppressed by the government, as has been done so many times in the past. But, in the age of the internet and social networking, that was clearly no longer possible. Wild rumors of all kinds began to circulate, and the state and local authorities slowly began releasing more information in an attempt to calm the public. As always in Mexico, the story was much more complicated than it had first appeared.

Earlier that week, the commander of the police homicide squad in Los Cabos had been assassinated. The military and police began a region-wide dragnet, spotted the suspects driving in luxury vehicles, and eventually cornered them in a private residence in Cabo San Lucas, in the colonia Las Brisas del Pacifico. Only one suspect was killed. The others were said to have escaped by way of the rooftops. The shoot-out that occurred the next day at Soriana, again in San Lucas, was unrelated to the first, or so said the authorities. Miraculously, nobody was injured, even though dozens of shoppers had been inside the supermarket at the time. Three suspects were detained. A few people were sent to the hospital to be treated for “crisis nerviosas.”

With no quick and easy English translation for all this drama, a large population of concerned American and Canadian expatriates were left to speculate on their own about who these sicarios might have been. “They must have been local drug dealers catering to the tourist market,” one gringo said. “I can’t believe they were connected to the drug gangs on the mainland.” With only one highway — a thousand miles long — to the border at Tijuana and a military checkpoint every 150 miles, it would seem foolish to use Los Cabos as a staging point for drug smuggling.

It’s difficult to say yet what effect these balaceras will have on the coming tourist season. “Well, the gringos come looking for drugs and prostitutes,” one Mexican said, “and that’s what San Lucas offers them.” Perhaps that is true of Cabo San Lucas. But the municipality of Los Cabos (really, more like a county in the United States) is made up of several towns, including San Lucas, San José del Cabo, and a long tourist corridor in between that consists of fine beachfront hotels. Except for San Lucas, which caters to the party crowd, those other communities have prospered by maintaining a reputation as safe and secure family destinations.

There are perhaps two positive conclusions one may draw from this unfortunate incident: One, the Mexican people are fed up with the narcos and the government officials who protect them. Many honest and hardworking people in Los Cabos depend on tourism. Here they have achieved an economic status that is hard to acquire elsewhere in Mexico, and they are not going to surrender their livelihoods without a fight. And, two, if the narcos think they can operate in Los Cabos with impunity, they might be mistaken. Because, at least in this case, the military made it clear they were prepared to hunt down the narcos and kill them.

Three weeks ago, when my cousin from Philly was visiting, I told her the only placed I'd go to in Mexico was Cabo.

We have fond memories of trips long ago at Thanksgiving to Los Cabos and La Paz. (How peaceful is "the peace" now?) But I haven't crossed the border into Mexico in years, and don't intend to. It will take a bunch of convincing to make me want to head south again.

This is an excellent article that makes no attempt to sweep the systemic problems of Mexico under the rug. But regardless of the cause, I'm not interested in combat tourism. The country seems headed down the road of a failed state, i.e. one that cannot control its own territory. We've seen another failed state in action for the past two decades and the prospect isn't a happy one. I'm referring to Somalia, where bandits rule small fiefdoms, famine is endemic, desperate people have turned to piracy as a way to make a living and nothing very good ever happens. Is this the final result of Mexico's ingrained corruption and oligarchical rule?

Oh, I forgot, it is the fault of the US, and "our" appetite for all kinds of illicit drugs from grass to cocaine. Mea culpa.