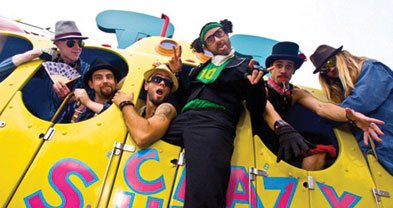 “Believe me, we feel stupid,” says Matt Burke, singer/MC for the P.B.-based hip-hop band. “This gal who volunteers to sell merch at our shows asked us if she could do a press release. Between working as a teacher, parenting, and making music, I am stretched thin and embrace any and all the free help we can get. I guess I should have edited it, but I frankly didn’t even know what a press release was or where it went. Now I guess I learned my lesson, should fire her, and guard our image more securely.”

Burke, who’s worked as a high school English teacher, says he’s embarrassed by tweets about the typo on Twitter. “I think I’m just a little upset it happened in the first place.... There are plenty of things to focus on about our recent endeavors, and by choosing the negative you only incite a negative reaction from us.”

The band has been on a roll over the past 18 months. Their song “So Bright” was featured in a national ad for KIA’s Summer Sales Event national commercial, and they took home a Best Hip-Hop trophy at the 2011 San Diego Music Awards. The 30-second Southern Comfort spot is airing on ESPN, CBS, TBS, Comedy Central, FX, ESPN2, Spike, and AMC, for what’s planned as a year-long promotion.

In addition, the band was recently namedropped in worldwide press reports after Prince Harry caught their act at the Belly Up on October 15. Burke says he’d rather earn that kind of positive ink, especially since they’re not the only locals to put out a major misspell.

“[Astra Kelly] spelled our name wrong on her new sampler CD. Get out the Twitter guillotine.”