Walking the Walls of Dubrovnik, Croatia 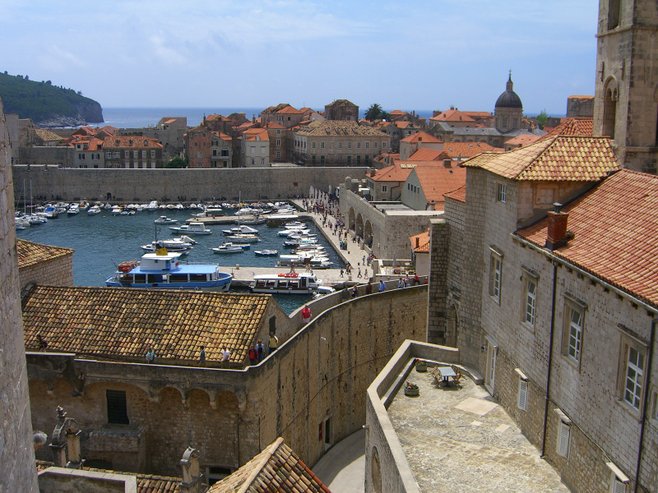 You’ll never forget walking the walls of Dubrovnik. Put this on your bucket list now!

Climb the ancient stairs of this walled city and take your first look at centuries of history. The tile roofs tell its story — some roofs are aged, multicolored brick, and have survived centuries of invading powers. Amazing.

Dubrovnik sits at a strategic spot at the entrance to the Adriatic. For centuries, this was the most desirable position to control the merchant traffic to and from Venice. The ancient walls were built in the 7th Century to protect against barbarian invasions. The Venetians, the Austrians and the French, among others, have controlled Dubrovnik. Each conqueror left an architectural mark.

Today, visitors marvel at this “pedestrian-only” town with white Italian marble streets and baroque buildings. Yes, there are no cars within the walls and the streets are white marble! At night, the moon and street lights glisten on the marble streets.

Walking the narrow streets and walls of Dubrovnik, it’s hard to imagine that in 1607 an earthquake crumbled this town. There’s so much history here. As recently as 1991, Dubrovnik was attacked by the Serbo-Montenegrin army.

Today, Dubrovnik is a safe and fascinating town. It’s the most popular tourist destination in Croatia, and the rooftops tell the whole story.

Dear Ms Askey I am an American of Yugoslav origin and live now in Dubrovnik (Retired) Unfortunately some of your facts are incorrect; 1)On Stradun the stone is not from Italy nor is it Mable but stone from the Island of Brac

4)The Austro-Hungarian Empire acquired Dubrovnik in 1815 after the defeat of Napoleon. The Venetians never acquired Dubrovnik. Dubrovnik was a Independed Republic from 1358 until 1808 and was the first European Country to recognize the United States.

When writing an articles my advise is go into history books Not Guide books.

I too have wandered the walls of this beautiful gem call Dubrovnik, a Unesco World Heritage site. It seems msiltd also has some confused fact about the earthquake which actually happened in 1667.

It is amazing that the rest of Croatia's coastline was virtually untouched by the war in 1991. The Serbian Yugoslav National Army (JNA) laid siege to Dubrovnik for eight long months dropping over 2000 rounds of deadly rockets that killed many innocent lives, and burned countless buildings. I praise the citizens of Dubrovnik that most of this damage is no longer visible except for the newer looking orange roof tiles.

I highly recommend a stop at the Memorial Room of the Defenders of Dubrovnik while there. This is a free exhibit detailing all the damage the city overcame while under Serbian shelling.