Say the Word at Hodad's 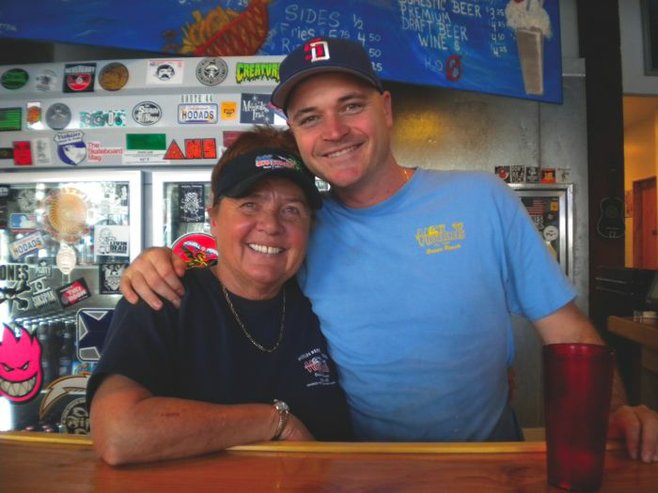 "Please send some more tourists. The last ones were delicious.”

This motto is on an Aussie license plate, one of their crocodiles smiling out from it. Shane is up on a stepladder, screwing in another one, next to a good-luck plate from Kentucky, “4O218.” (Get it? Forty-two-one-ate — “fortunate.”)

“People give us their license plates, just like they do at the O.B. Hodad’s,” Shane says. 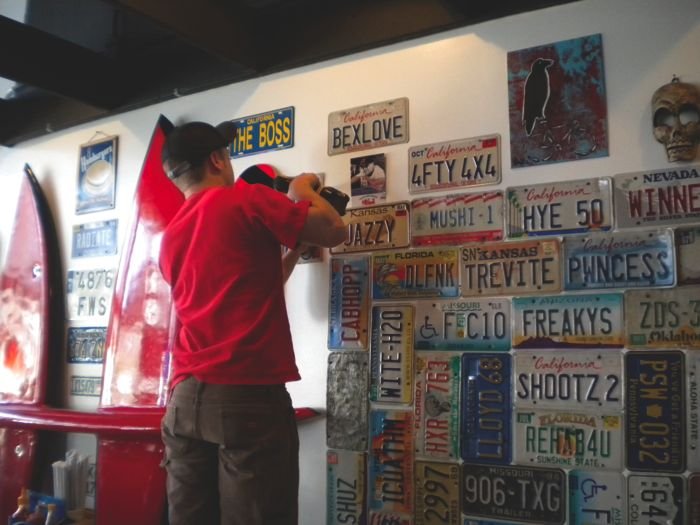 This is — at last! — the new downtown Hodad’s, on the corner of Tenth and Broadway. Honestly, I wondered how they would pull it off. Hodad’s made its rep in the hippie-surfer world of O.B. But here, at the wrong end of Broadway, miles from the nearest wave?

And yet inside — it’s 2:00 in the afternoon — the place is buzzing with peeps. Those burger smells are wafting out, along with a blast of hellfire guitar riffs. Suddenly, I am hungry.

It feels much roomier than Hodad’s O.B., but, just like in O.B., a long, varnished surfboardy table fills up the center of the space, and the booths have the same blue vinyl backing. No cut-off VW camper van you can eat in, but they’ve got plenty of surfboards hanging around, along with screw-the-establishment signs. “No shirt, no shoes, no problem.” “Under 99-gazillion sold!” “It’s not life or death…it’s lunch or dinner.” “If this is not the best burger you’ve ever had…we don’t really want to hear about it.” “Open 24 hours…just not in a row.”

I sit at the bar, check what everyone else is eating. Gent to my left — John — is into a Guido Burger ($6.50). He reckons it’s named after Guy Fieri, the Food Network star who visited the O.B. location.

“It’s made with pastrami instead of a beef patty,” says John. “Plus pickles, Swiss, grilled onions. Real good change.”

Lady with him, Holly, says hers is a single bacon cheeseburger ($6.50; $8.25 with fries). “These are the best burgers we’ve had, honestly,” she says. “We live here in East Village, so we come over a couple of times a week.”

On my right, Greg and Sabrina are polishing off their Blue Jay Burgers. Greg’s sipping a mug of beer ($3.50), Sabrina’s got a big gloopy strawberry malt ($5). Both reach out to a pile of potato wedges and onion rings. “Frings,” says Greg. “Fries and onion rings. Cost $4.50. It’s all too much food, though. We’re taking them home.”

The Blue Jay ($7; $8.25 with fries) is a bacon cheeseburger with grilled onions and blue cheese. Oh, I’d love that.

A lady named Trish stands on the other side of the counter, waiting for me to say the word. I check the wall menu behind her. Mini-burgers cost $4, or $4.50 for the mini-cheeseburger, or $5 with cheese and bacon (add $1.25 for fries in the basket). A full-sized single hamburger runs to $5, a double hamburger’s $7.25, and the most expensive of all is the double bacon cheeseburger at $9.75.

“But that is ginormous,” says Trish.

I settle for the pastrami burger, the Guido, just ’cause I’ve never had one. Plus a half serving of onion rings ($4.50). ’Course, afterward, I see I could’ve had a half order of frings for $4.25, but whatever.

Guy comes up and hugs Trish. Name’s Brooks. Turns out, Trish is his mom. Turns out, this place is a family affair. Brooks is co-owner and nephew of the boss-man, Mike Hardin. The founder, Byron Hardin (his portrait hangs on the wall above the kitchen) was Brooks’s grandpa.

“But it was my uncle Mike who made these burgers lavish,” says Brooks. “He wanted lots of everything. Two big tomato slices, tons of mustard, ketchup, mayo. My grandfather Byron grew up in the Great Depression, and he was careful with the amounts he parceled out. Not Uncle Mike. We do it Mike’s way.”

My Guido Burger is luscious and tasty, but, now that I think about it, pastrami’s never been my thing. Next time, it’s definitely gonna be a Blue Jay.

As I chomp, I notice a wall full of celebrity-style photos. “Mostly, it’s our guys,” says Brooks. “Staff. A whole lot are musicians. We’ve got some rad players serving here.” 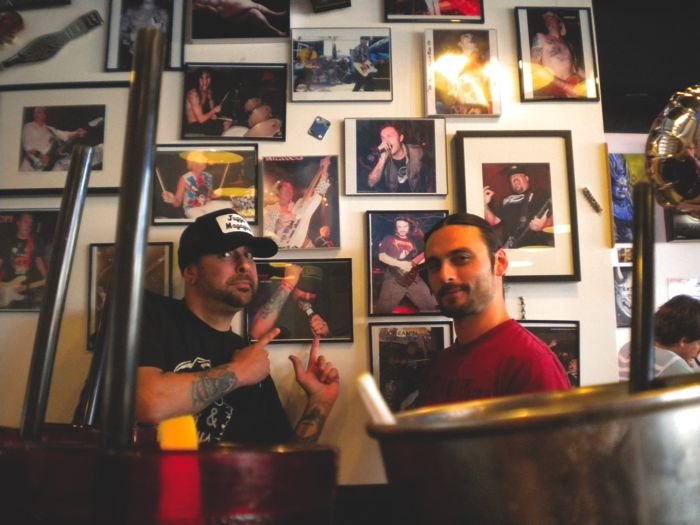 Employees like it here because they can fill in for each other when their bands get to tour. Nick Bone, of the Screamin’ Yee Haws (in cap), and Jake Phillips (Downspell) in front of their publicity shots

I see a shot of one wild guitarrista, Jake Phillips, from the band Downspell. He’s from Sitka, Alaska. A moment later, he’s standing next to me, tray in hand. “We’re death metal,” he says. And now Nick Bone, from Drunkin, Punkin Idiots and the Screamin’ Yeehaws, comes up. “We’re a little bit Southern,” he says. I ask Shane, who’s still screwing up license plates, what his thing is. He’s a bass player with Gross Negligence. Hardcore skate punk, I think.

“It’s a ’60s term Grandpa Byron had,” says Brooks. “A hodad’s someone who hangs out at the beach, has the best board, the best gear, the coolest shades, but it’s all for show. He never actually goes out to catch a wave. That’s a hodad.”