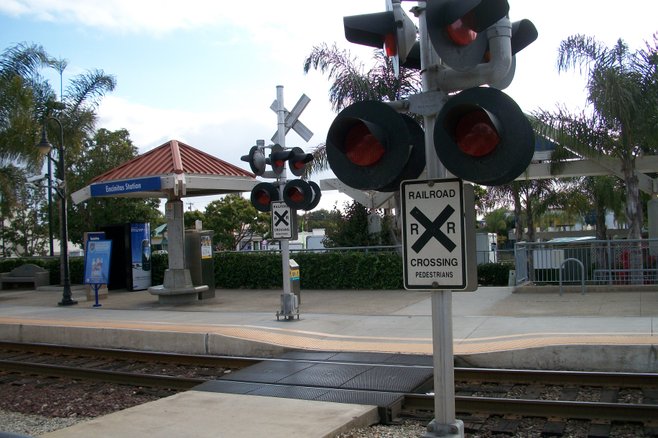 Last week, the California Public Utilities Commission approved the plan for an underground pedestrian tunnel at the western end of Santa Fe Drive at San Elijo Avenue/Vulcan Avenue. The $4.5 million project would allow foot and bike traffic to go under the railroad tracks to access Coast Highway 101 and Swami's beach. It was the final hurdle for the proposed tunnel, which could begin construction this fall.

Supporters, like the city, the San Diego Association of Governments, and transit officials, say it will increase public safety. Taxpayers' advocates say it’s a huge waste of money.

When first proposed, residents pointed out the two existing pedestrian crossings at the Encinitas Transit Center. People who park in the center's lot can cross the tracks by using a sidewalk; loud bells and flashing red lights signal when a train is approaching — a mini version of a railroad crossing, sans the guard gates. The sidewalk has been in use for years, the signals warning pedestrians of the Amtrak trains that do not stop at the Encinitas station. Those pedestrian crossing signals cost around $100,000 each.

The city countered that since funding was from various state and federal agencies, it must comply with regulations that specify no possible pedestrian contact with tracks. Locals have pointed out that residents have been safely crossing the tracks for over 100 years. Those opposed say government is willing to waste millions of dollars to protect itself from liability.

The infrequent deaths on North County railways are mostly a result of persons who commit suicide or those who are intoxicated. Those opposed also point to other coastal cities that have built underground tunnels (such as Oceanside and San Clemente) and claim that the tunnels create more graffiti and crime. In the late-night hours, they stated at public hearings, tunnels become a shelter for the homeless who often urinate or sleep there.

Currently, any crossing along the five miles of track through Encinitas (other than at the four road crossings) is trespassing. Surfers and joggers have been cited for crossing the tracks. The city has plans to build three more tunnels once funding is acquired. Taxpayers’ advocates have talked of filing an injunction to prevent the expenditure.

What's wrong with this picture? Almost everything is wrong. Because the feds and state are paying for this, it has to be gold plated and far more elaborate than necessary. Why are our broke state and even-more-broke federal government paying for these local projects? Shouldn't it be a matter for the city of Encinitas? Respectively, I don't know, and yes of course it should. But this is the pattern these days: there are no street, road, or infrastructural projects that are fully financed with local tax revenues. The cities and counties head to state and federal governments and plead for the money. When they get it, there are strings attached. The strings make this cost $ millions when it could be done for a small fraction of that.

And what ya' wanna bet that the surf rats won't use it? Uncool, dude, to go into the tunnel. Just hop the tracks--quicker, simpler and out in the open. That tunnel will be avoided by those who fear crime, will provide a spot for the druggies to hang out and do their deals, and will be rapidly covered with graffiti.

Was a pedestrian overpass considered? One of those "shouldn't" cost $5 million, and there's no place to hide on one of those. Of course not, everything governments build today has to be the absolute best money can buy. Wonder why we have these deficits? Wonder no more.

Great story Mr. Harrison. Please let us know if there is anything those of us opposed to this project can do to stop it. We need to do what it takes to bring common sense to these elected officials regarding this gross waist of money and creation of a problem not a solution!
The train tracks are an economic obsolescence that could be converted into a treasure for our pristine coastal corridor by tunneling the tracks and building parks above them. 300 yards of every 400 yards can be covered and made into parks and parking spaces (open areas are necessary according to some rules for the trains engines or something..).
If money is available we should tunnel the tracks and build parks above them as they did in San Diego above the 15 freeway south of El Cajon Blvd. (not exactly pristine coastal property, but good for the hood...). Tunnel the train not the Pedestrians... Imagine how awesome it would be to see parks alongside historic PCH as everyone rolls into Cardiff & Leucadia, great first impression and public resource.

Oh, it is a great idea, putting those tracks underground. Doing that for a couple hundred yards along the coast would cost far more than this cockamamie pedestrian tunnel. No, a relatively short stretch of undergrounded tracks could cost a billion. But, hey, what's a $ billion?

But please elaborate on the notion that the tracks are an "economic obsolescence". Right now those tracks are operating at or near saturation and should be double tracked all the way from the Santa Fe depot up to Orange County. That will not happen for a long time to come. So they do the best that can be done with the tracks, and keep the trains running. What makes that sort of use obsolete?

a bridge over would be best. but in a perfect world there would be no train in the way of residents coastal access. or at least nobody ticketing for "trespassing"