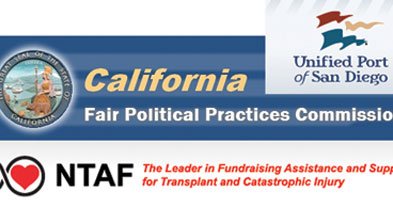 A personal tragedy suffered by Celia Brewer, assistant port attorney for the Port of San Diego, has prompted the state’s Fair Political Practices Commission to conduct a review of whether public officials should be required to disclose donations used for the medical care of their family members. A March 15 advice letter from the commission to Brewer, who also serves on the board of the King-Chávez charter schools group, outlines the unfortunate circumstances: “Your son sustained a severe spinal cord injury on February 1, 2010, which left him with no feeling or movement below the chest level and dependent on a ventilator to breathe. Despite improvements including the ability to breathe without a ventilator and to stand and take a few steps during therapy, your son has years of therapy ahead of him. As a single mother, the financial costs have been substantial. Even with health insurance, your son still has many uninsured injury-related expenses including his rehabilitation program and in-home care, which currently total approximately $50,000 a year.”

The letter goes on to recount a fund-raising campaign started last year through the nonprofit Catastrophic Injury Program of the National Transplant Assistance Fund. “Donations to [the fund] in your son’s honor have been made by family, friends, businesses, and strangers.” Though the foundation provides a list of those giving more than $250, contributions of less than that can be made anonymously, according to the letter, which added, “However, you note that in some circumstances you may have access to donor names and amounts if the donation was provided at a coordinated fundraising event.” Under current law, gifts to officials are limited to $420 a year from a single source, and any over $50 must be reported on the official’s annual Form 700 personal financial disclosure filing. If a donor who has given a total of $420 or more has a stake in a “governmental decision” that the official has a role in making, the official must recuse him- or herself from influencing its outcome for a year, the letter says.

But Brewer’s case involves “complex questions” and “circumstances that do not clearly fall within the existing statutory framework,” the agency says in its letter. “Accordingly, your question presents issues requiring a policy interpretation best left to the Commission.” Fair Political Practices Commission spokesman Roman Porter says that public hearings will soon be scheduled to discuss the matter. “In the interim,” the letter says, “we recommend that you disclose the name of any person who is a reportable source of gifts, as specified in your agencies’ respective conflict-of-interest codes.… [T]his would include disclosing any person you know, based upon your participation in a fundraising event, who has provided payments to [the fund] on behalf of your son exceeding the $50 reporting threshold for gifts and the amount of the payments, if known, as well as the list of all persons who have donated more than $250 on behalf of your son as provided to you by the [National Transplant Assistance Fund].”