"We don’t see tons of 18-year-olds anymore in Calle Revolución, getting drunk and acting stupid." 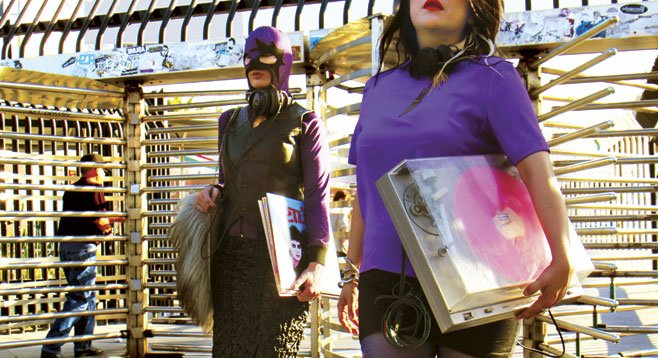 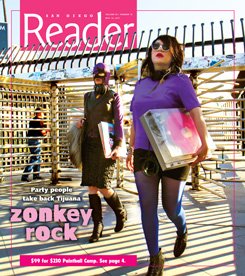 "We stopped being afraid of what was happening."

Having held residency at the late Radio Room, the Flame, and Tijuana’s La Mezcalera, Club Purple recently put on their first night at Bodega Aragon a few blocks from the heart of Tijuana’s happening Sixth and Revolución. The underground dance night, hosted by tijuanensa Miss Lady D and sandieguina DJ Monsterpussy, has seen performances from San Diego/borderland artists such as Addiquit, Leg Lifters, Saul Q, and Halloween Swim Team and recently retired monthly status in favor of spontaneity.

A five-dollar cab ride from the border, Bar Aragon is attached to a $17/night motel of the same name and looks like an abandoned El Torito. The nightclub, Bodega Aragon, hasn’t opened yet, so my companions and I take a seat in the smoky lounge and ask about specials. The waitress’s reply is generous, if not a bit carnal for our mood, so a friend reiterates, “No, no, mi amor. The beer specials.” We work on a bucket of Tecate, which costs the same as a night’s lodging, while a few middle-aged locals shoot billiards to a skipping soundtrack of Shakira, “Hotel California,” and “Total Eclipse of the Heart.”

Craving mas vida, we walk to the vibrant “Sexta” and grab some bacon-wrapped TJ street dogs near a wall stenciled with a life-sized Banksy-esque Zonkey (that’s zebra/donkey, gringo). Dubstep booms from La Mezcalera across the street, where San Diego’s Blackass is DJing later in the night. Writing on the corrugated metal trim of another club exclaims, “You Are in the Most Visited City in the World.”

The sound of thumping nu-disco draws us into La Chupiteria, a small future/retro bar that appears equal parts Ikea and Q-Zar (think Stanley Kubrick directs Tron). By 11 p.m., the bar is bustling with a hep Friday-night crowd — dancing, smoking, and drinking $4 Big Gulp portions of Negra Modelo on tap.

Around midnight, we pay the Bodega’s 30-peso cover (about $2.60) and join a crowd of maybe 40 locals in the near-full venue. TJ indie-pop duo Dani Shivers glows beneath black lights, laser beams, and stage fog as they play their Casios. The club opened here about a year ago, a location that Miss Lady D calls “a diamond in the rough.” Planning to hop between venues, Club Purple will showcase other burgeoning gems of Tijuana’s nightlife at future events.

Local synth-and-bass duo Dancing Strangers celebrates their online album release (soundcloud.com/dancing-strangers), recalling Joy Division and the Jesus and Mary Chain with dark, moody vocals, overdriven bass, and reverb-y drums. Singer Astronauta Jackson later reflects on the city’s revitalization over the past couple of years since bars such as La Mezcalera pioneered the way for the now-bustling nexus of Sexta y Rev.

“The Tijuana nightlife has not only changed,” says Jackson, “but it has grown with the locals and the tourists. We fought the drug war by partying, meaning we stopped being afraid of what was happening. We wanted to stop being our own hostages, so we started going out. People started creating their own events or bringing them from San Diego, in the case of Club Purple, which is open to the 18-and-up crowd and goes late. Several influential and artistic Americans living south of the border have helped kill the stereotype of drugs and gunshots, which has opened up more American minds to stepping foot into this amazing, vibrant city that in the past has only been a myth and a bad reputation.”

One of the Americans Jackson credits for changing Tijuana’s image is Derrik Chinn, a TJ resident of four years who runs non-touristy tours via Turista Libre and maintains Tijuego.com, an events-and-culture site aimed at integrating the people of San Diego and Tijuana. “If people don’t come looking for trouble, trouble doesn’t go looking for them,” Chinn tells me in the quiet Bar Aragon when I ask if gringos should worry about visiting.

Miss Lady D notes: “The culture in Tijuana is changing both in the music and the art world. We don’t see tons of 18-year-olds anymore in Calle Revolución, getting drunk and acting stupid. The air of the nightlife is more mature and obscure now. There has been a lot of press lately about the Tijuana scene, and people in the U.S. are starting to be more intrigued and less frightened with our city. They come here to escape the über-hipster camera following sometimes-predictable crowds. The feel you get when you’re here can be a little European, and that can be very refreshing and exciting for many Americans.”

After a dance-friendly DJ set from San Diego’s Dr. Indulgent, tinnitus ringing loud in our ears, we make our way to La Estrella, a working-class dancehall that stays open well past the 2 a.m. bar curfew. Long predating the many young clubs in the area, La Estrella has a rootsy, peoples’ bar feel. The dance floor occupies the bulk of the bar, around which waiters scurry with buckers of beer, blowing whistles and casting looks which proffer, “¿Cervezas?”

A band fronted by the son of Mexican cumbia legend Rigo Tovar plays standards and we pass the night with two-dollar beers on the dense and sweaty dance floor. Crossing the border at the first hues of sunrise, I’m fully in accord with Jackson when he says, “This new Tijuana is full of youth, style, talent, and good vibes.”

Grow a pair and head south May 20 to Don Loope bar in Calle Sexta for Kim Ann Foxman (singer from Hercules and Love Affair). ■

Just for the record, Blackass was playing Techno that night;)

Club Purple will be hosting another party in Tijuana with Kim Ann Foxman from the band Hercules and Love Affair, Total Freedom (L.A) & Miss Lady D, May 20th @ Don Loope. For more information click on the facebook event page http://www.facebook.com/event.php?eid=152739378125689&ref=ts

My Spanish consultant assures me there is no such thing as a "tijuanensa". I hereby forfeit my right to feminize words in languages I only sort of understand for one week.

what?! i disagree, create new words!

Tijuana is all about invention and process and change. I agree with monsterpussy--invent away!

Thanks for this terrific piece about the new wave in Tijuana culture! The Mexico Tourism Board ads have been all over the news this week--and while I understand the importance of tourism to the Mexican economy, I can't help but wonder if they really get it. I mean, who wants a culture driven by Marriot hotels pushing frightened Americans to get wasted on cheap pina coladas by a pool? !Que VIVA la Calle Sexta!