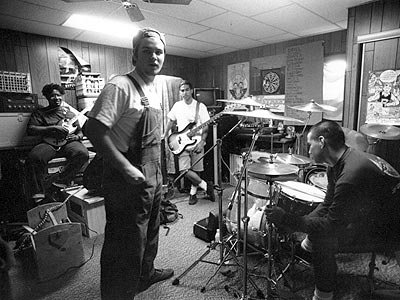 In honor of her late brother Michael “Stimy” Steinman, Jennifer Oliveira of Rancho Peñasquitos organized a donation fund that will provide scholarships for five students aged 8–15 to spend a week at DayJams, a rock-and-roll summer camp in La Jolla. The camp teaches students to write, record, and perform an original song as a band on guitar, bass, drums, keyboard, brass, or vocals. DayJams accepts students of all skill levels.

From teenage punk band Sub Society to successful alt-rockers Inch and later projects Congress of the Cow and Lakeside Orchestra, Steinman was a staple of the 1990s and early 2000s San Diego scene, which FM 94/9 DJ Tim Pyles once described as an era when “we were supposed to be ‘the next Seattle.’”

Inch was awarded Best Alternative Rock honors at the 1997 San Diego Music Awards and, in 2002, Congress of the Cow was named Best New Artist. Inch’s “For Duty and Humanity” appeared in the movie Flirting with Disaster.

Steinman left San Diego several years ago to live in Fort Collins, Colorado, where he played with the band Harvey Knuckles. He played a set at Live Wire, where he used to bartend, last October for the bar’s anniversary party. A memorial guitar is now mounted on the bar’s wall.

“In addition to the music Michael has left behind, these scholarships allow him to be a part of creating the next generation of musicians,” says DayJams executive director Daniel Kline in a press release. “We’re honored to be part of his legacy and appreciate that the people whose lives he touched consider us worthy of their donations.”

To apply for the scholarship, send a video before May 31 to [email protected] explaining why the student wants to attend DayJams and a sample of musical ability. Beginners are welcome. Classes will be held from July 25 to 29 at the San Diego French-American School, not far from the private school on Mt. Soledad that Steinman attended in the mid ’80s.