Punk Swap at the Shakedown 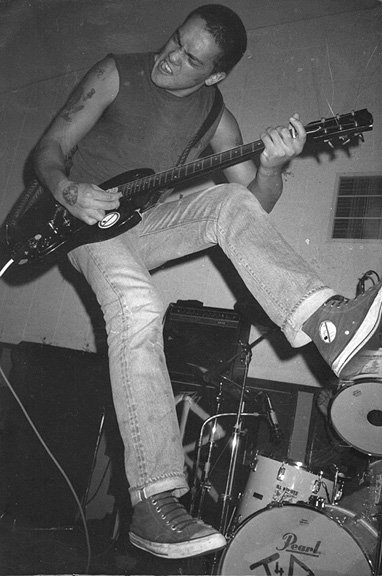 “I’m not gonna kick somebody out because they’re selling something other than punk,” says Josh Barnes, “but that’s kind of it,” he says about the Shakedown’s punk-record swap meets. “But punk,” he says, “covers a broad section.”

Barnes wears a lot of hats at the Shakedown on Midway Drive. He alternates as a show promoter, deejay, bartender, doorman, bouncer, and now, record-swap-meet organizer. It is the way business is done at the retro punk club. Since the Shakedown opened last September, Barnes says the core staffers do everything from clean bathrooms to produce shows. But the idea for the record swaps, he says, came from another local venue.

“John Reis held a free swap at Bar Pink. That’s pretty much where I got the idea. It was really cool and everybody had a good time. I’m not sure why he stopped.” Barnes ran a couple of record swaps on his own at the Tower Bar on University Avenue as part of their soul-food Sundays. “We’d do a record swap and have soul food and play soul music,” he says, “and people came and sold their wares. But when I got [to the Shakedown], I thought about getting a lot more serious about doing a record swap meet and I got more vendors to come from all over.” At the first Shakedown swap there were 25 or 30 vendors, he says, including Radiation Records and TKO Records. “They do a swap quarterly in the L.A. area, and all those guys came down to the first one here three months ago.”

With the exception of potential beverage sales, the Shakedown makes no money off the swap. “It’s free to attend,” Barnes says, “and free to sell.” Why no charge? “It’s a pain in the ass to lug all that stuff around.” Barnes, a collector of vinyl himself, should know. He says his personal record collection numbers in the thousands. “Me and my girl have a house in Kensington. I have a man cave, and it’s wall-to-wall records.” He says he started buying records when he was a little kid. “I sold off my collection when I moved out here in 1996. Then, I went to Off the Record and saw some old records. I said, I gotta have these, and it started over again.”

On swap-meet day, Barnes sets up tables throughout the inside of the club. Overflow tables are set up in the back parking lot under canopies. Vendors, he says, are encouraged to bring their own tables. He says the first swap drew a varied mix of local collectors and punk rockers as well as vendors and buyers from L.A. He plans to hold them quarterly. “The next one [Saturday, May 14] will hopefully be bigger.” Ill Repute is scheduled to perform.