From Sea to Shining Sea: Charlottesville to San Diego 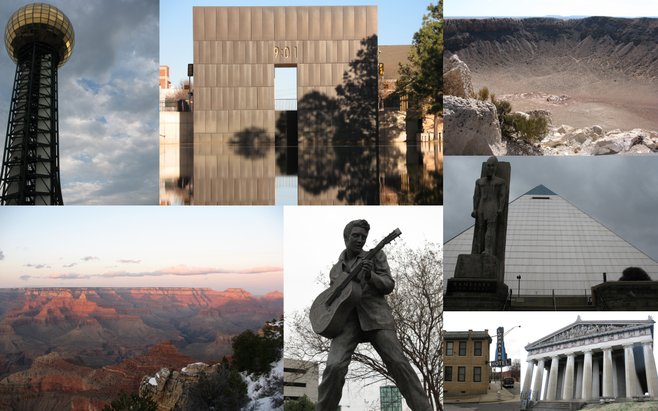 Is there a more fitting origin for a cross-American journey than the birthplace of explorer Meriwether Lewis and former home of Thomas Jefferson?

Nestled amidst the Blue Ridge Mountains, Charlottesville, Virginia, soon became only a collection of memories and a dot in my rear-view mirror. I was authoring my own Declaration of Independence as I departed my hometown. Destination: San Diego.

The route was simple — Interstate 40 nearly the entire trip. Simplicity, however, neither means dull nor a lack of attractions. First stop: Knoxville, Tennessee, home of the Sunsphere, a 266-foot-tall, Simpsons-mocked remnant of the 1982 World's Fair. A Knoxville icon, it’s a free, often-overlooked landmark, and it offers an extraordinary panoramic view. (Note for geeks: Find the world's largest Rubik's Cube stashed in the corner of a nearby hotel.) Onward...

Nashville. Music City. Capital of Tennessee. Athens of the South? Yes, in Nashville resides a full-size replica of the Parthenon juxtaposed against urban modernity. An art gallery fills the inside; outside, a beautiful park with ponds and picnic facilities. Unfortunately for me, the day brought torrential rains and flood warnings.

Memphis: Site of history, blues and Ramesses the Great. Experience some of our nation's triumphs and tribulations at the National Civil Rights Museum ($13), located at the Lorraine Hotel. Famous Beale Street, awash in neon glow, features B.B. King's Blues Club and more music venues than you can shake a pick at. Nearby, get your rhinestone fix at legendary Graceland. If that's not enough, walk like an Egyptian past the world's sixth-largest pyramid.

Rising from the farmlands appeared Oklahoma City, known sadly for the bombing in 1995 but also one of my favorite bands, the Flaming Lips. The bombing memorial is breathtaking — one of the most moving I've experienced — yet a grim reminder of the lengths people can go for attention. Although the Lips were not in town, fans can visit Flaming Lips Alley in Bricktown, a shopping and entertainment district.

Down the road, an ascent into the Sandia Mountains led to magnificent vistas approaching Albuquerque, New Mexico. Beyond Albuquerque came Gallup, NM. Mentioned in Nat King Cole's "Route 66," Gallup is the "Indian Capital of the World" and setting of many classic westerns such as Billy the Kid.

Arizona is beyond beautiful. Meteor Crater, just off of I-40, is a must see ($15). Yet nothing could prepare me for the Grand Canyon, a short trip north of Flagstaff ($25 entrance). Like most people I’ve seen photos, but none does it justice. Flagstaff offers good food, microbreweries, and is an excellent "base camp" for the canyon.

Finally, after six days and 3000 miles, I arrived. The journey from sea to shining sea left new national perspectives on my mind. Despite a diverse mix of terrain and people, our similarities are undeniable — connected by one stretch of concrete and asphalt, it’s a small world after all.