VW Painted by the Art Kids of San Diego County

If you happen to be driving down Seacoast Drive in Imperial Beach, you will probably notice the 1977 VW bus owned by John Haupt.

Haupt, owner of the Beach Club Grille, decided he wanted his bus to stand out from all the rest. So, he hired the Art Kids of San Diego County (based in Imperial Beach) to paint his bus with events, people, and slogans from the ’60s, with the intent of parking it in front of his restaurant.

It took the artists over 120 hours to paint over 100 icons and references from the ’60s on the bus. The main artist was 18-year-old Josue Merigo of San Ysidro, the lead artist for the Art Kids. His work included the painting of all the portraits of the celebrities. Many of those he painted were not familiar to him, so he researched those chosen so he could capture their likenesses and learn what they did.

One can see painted on the windows and sides of the bus the likenesses of the Mamas and the Papas, Simon and Garfunkel, Bob Dylan, Jim Morrison, Janis Joplin, Jimi Hendrix, Peter, Paul, Mary and Puff the Magic Dragon, Carlos Santana, Bob Marley, the Beatles, Frank Zappa, Willie Nelson, and César Chávez. 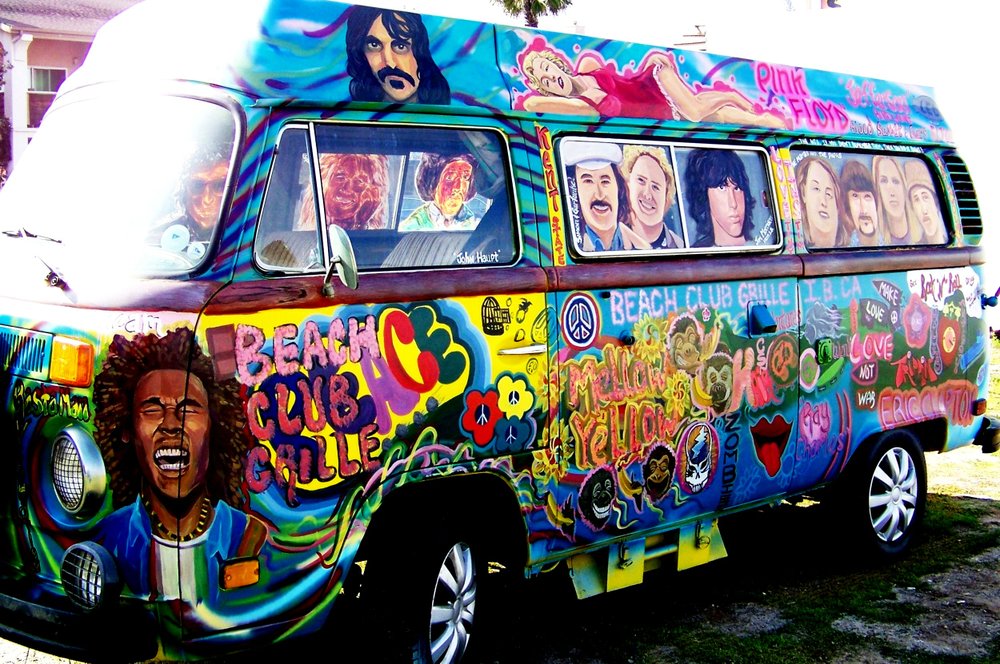 Wow! Very impressive - would it be possible to provide a link to a larger version (or alternate takes) of this photo??

That's cool! My daughter's art group, Young At Art, did the same thing to a VW Bus in OB for the holiday parade last year. I believe the other one is parked outside the Maxoto garage on Cable...