Monks and Gods and Men 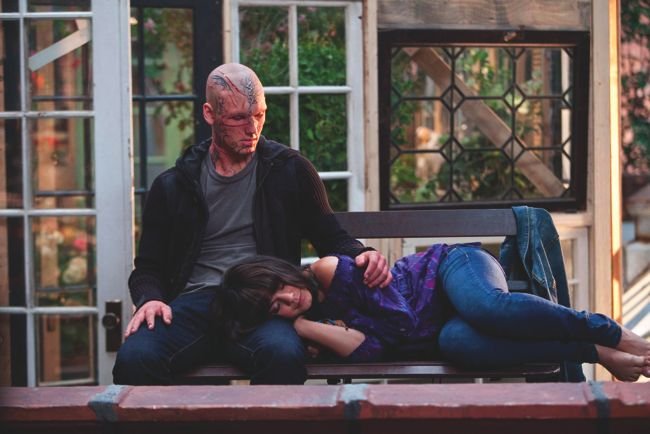 There is life after the Oscars, and it includes the San Diego Latino Film Festival. More on that, once we bring our dance card up to date:

Of Gods and Men

The French title is Des hommes et des dieux, but by any name Xavier Beauvois’s film is a moving overlap of the human and (implicitly) divine. I cannot understand a web-posted remark that the film “might have benefited from some spirited Shavian debate.” George Bernard Shaw was not religious, and isn’t it obvious that the story’s pensive, often prayerful silences resonate words and even surpass them?

The story’s eight Cistercian monks do debate, in their gracious way, in a simple monastery on a foothill of the Atlas mountain range in Algeria. The brethren are elderly or approaching it. Their relatively young abbot (acted gracefully by Lambert Wilson), consults but also leads with a firm, prudent piety. An upsurge of Islamic militancy threatens their survival. This did happen in 1996, and a firm sense of documentation underlies the story right to the heart-melting finish.

The remarkable faces include Michael Lonsdale (of countless French films, as well as Munich, Agora, Day of the Jackal). As a diabetic monk and doctor — a virtual Albert Schweitzer for the Muslim villagers — Lonsdale is the film’s gentle center of gravity. The brothers are the shrinking remnant of a religion fading out in the area, as did (not far away) St. Augustine’s many centuries earlier.

Director Beauvois and writer Etienne Comar take time to contemplate, to demonize no one, to regard ritual without overdoing it, and to pay respect to Islam while cherishing this intimately fraternal form of French Catholicism. Along the way they also offer what may be the finest filmed tribute to Tchaikovsky’s music, via “Swan Lake.” As Anthony Lane noted in his New Yorker review, it “means more, and rings out more resoundingly, in this one excerpt than it does in the whole of Black Swan.”

As in pictures from Bresson (Diary of a Country Priest), Cloche (Monsieur Vincent), and Rossellini (The Flowers of St. Francis), the religious life is rooted in the very local and deeply specific. Beauvois loves these monks as men. This endearingly conscientious but blessedly unpretentious film admires a testing faith “which separates sand from water.” And, in this story, love from fear.

Imagine old master Pieter Bruegel as a muralist at Ye Olde Medieval World in deepest Wisconsin, and you’re set for Red Riding Hood. In the most Bruegel-ish scene, tipsy villagers dance by making strange disco gyrations to what seems a rustic ancestor of Warren Zevon’s “Werewolves of London.” Their main problem is werewolves, including a big, computerized beast that might scare anyone under age eight (this is not a fairy tale for kids).

Amanda Seyfried, who looks made of cheese from the moon, casts her lunar glow as Valerie the virgin, whose family may have wolf blood. Julie Christie, after about 50 movies, finally gives a generically bad performance as Valerie’s mom, using a bland American accent. Gary Oldman lobs a thumping British accent as a lunatic obsessed with witchcraft (wolfcraft?), and, as a sweet priest, Lukas Haas looks desperate for another barn-raising from his career starter, Witness.

Director Catherine Hardwicke has not forgotten her marching order from Twilight: keep staring at the pretty people. Not only Seyfried, but the hotties who covet her, Max Irons and Shiloh Fernandez. There is dull violence, and sexual connotations (including the famous red hood and a phallic knife) are obvious. But the movie is tame, as if the Brothers Grimm had written for a puppet theater.

Xavier Dolan’s French-Canadian film Heartbeats is about a Montreal love-triangle where one of the three is not in love or even much in like. Nicolas is played by Niels Schneider like a golden divinity from Malibu. His blonde beauty intrigues and then addicts the gay Francis (Dolan) and his friend, the straight and sardonic Marie (Monia Chokri). Marie is deep into ’50s styling, and Nicolas “adores” Audrey Hepburn, but that serves as no more of a bridge to the love god (who seems to float mentally in a private cloud of mirrors) than do drinks, smoking, theater, parties, a country trip, and even some shared time in bed.

Dolan is like a Godard fan redoing Truffaut’s Jules et Jim for people hooked on channel surfing, Facebook, and Chinese art-cinema. His shots have the snap focus of visualized tweets, but they capture moods. He includes other lovelorn seekers, brief sex, Bach and Wagner, marshmallows, the song “Bang Bang” in Italian, and sensual colors that relieve stretches of ennui.

The best acting, given just one scene, is by Anne Dorval. She played Dolan’s mom in his debut feature at 19, I Killed My Mother, and she is more interesting than Nicolas. Unless you just want to drool.

It should be called The Lion Queen. A documentary by Dereck and Beverly Joubert, also a “National Geographic entertainment,” The Last Lions details and dramatizes the harsh survival of a lioness in Botswana. Exiled from her pride, she hunts solo to sustain her three cubs (they don’t all make it, so children beware). There are crocodiles and menacing water buffalos, and when hellish hyenas show up, you might want to reach for a machine gun.

Though glazed with Nat-Geo gloss and glow, this is a grim story, like the distraught SOS of a leonine feminist who is (to borrow from Tennyson) “red in tooth and claw.” Jeremy Irons reads the pompous narration (“It is the ancient dance of Africa,” etc.), hyping almost every moment of drama. A bonus of added pain is species guilt: we are shrinking the lions’ habitats and their numbers.

Even the location is a mouthful — the UltraStar Mission Valley Cinemas Hazard Center — and we can offer in this space only a welcoming appetizer of the San Diego Latino Film Festival. Still a teen at 18, though definitely grown up, the fiesta led by Ethan van Thillo and his year-round bunch of devoted aficionados spills open its piñata of about 160 films at the Hazard, March 10–20.

Entries from many countries include 46 U.S.-based movies, 39 from Mexico, and 37 from Spain. Of the last, Flamenco, Flamenco (March 15 and 19) is master Carlos Saura’s sequel to 1996’s acclaimed Flamenco, again shot by Vittorio Storaro to exhibit a rich spectrum of the flamenco world. No major film artist has done more than Saura to honor another art.

There will be a tribute to Mexican comedy star Xavier López, a Jewish-Latino showcase of eight works, Latin films that have been up for Oscars, a slew of documentaries, seven Brazilian features plus shorts, special family shows, Cine Gay with 13 works, tributes to Latin public TV and telenovelas, a March 16 spread of short films by young artists, and opening and closing parties. Most tickets are $10 ($8 for students, military, seniors), with fest passes at $90 and $180. Visit sdlatinofilm.com or call 619-230-1938.