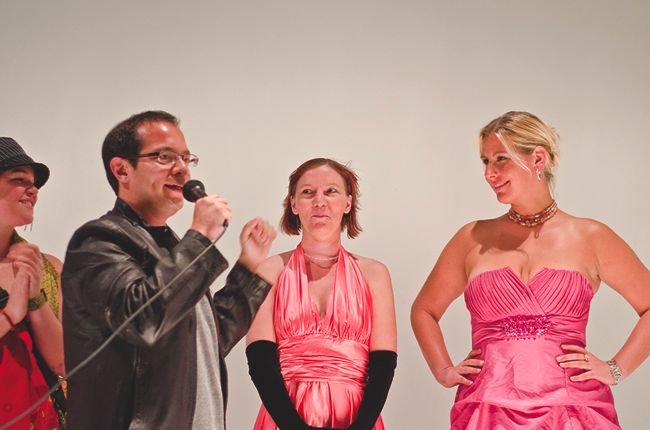 The carpet was just being rolled out between the birds-of-paradise planters when my roommate Eli and I arrived at Ray Street Studio in North Park for the Oscars Spaghetti Social party. Paintings adorned the walls of the industrial art space as Swarmius, an eclectic jazz quartet, played in front of a screen airing pre-award ceremony commercials.

“It’s basically a modern spin on ancient Babylonian rites,” Eli theorized. “People compete to prove their essential human worth and the winners are given golden idols.”

Every conceivable appetizer was represented in one corner next to a table of pastas, which our hostess, Cynthia, had been preparing since five in the morning. Cynthia has been organizing a Spaghetti Social potluck every few months at various venues around town for the past four years. 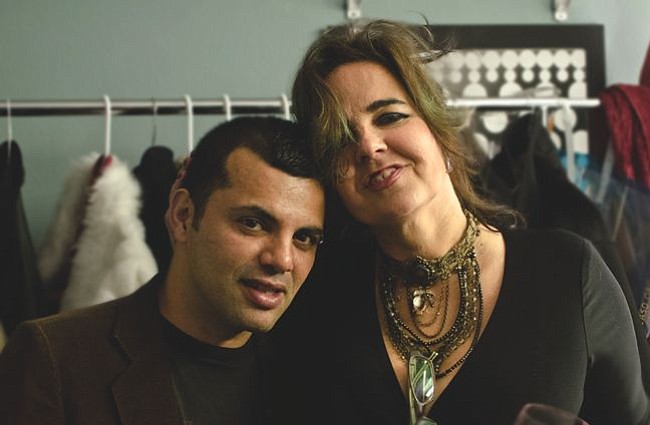 Our hostess Cynthia with a friend

The online invite encouraged a theme of Holly/Bollywood chic with prizes for the best costumes. As such, the crowd was interspersed with black swans, belly dancers, a swami in an orange turban and sunglasses, and Bono, who I later learned was actually a professional Bono impersonator.

A woman with feathers in her hair and black, sharply defined bangs asked, “Have you seen a pretty girl around here in a kind of bohemian outfit?” I could point out a few. The party included an affable and somewhat eccentric collection of artists, musicians, socialites, gallery owners, promoters, and photographers, all milling around with cocktails, making light conversation and nibbling from snack platters.

I ended up talking with a friend, Bonnie, and her buddy Sam about music festivals, hot climates, and the simultaneous appreciation and loathing for portable toilets at places such as Coachella and Burning Man.

“I know what you mean,” I related. “At some point you’re just sweating bullets in a 115-degree Honey Bucket. It’s never pleasant.”

Bonnie found the term “Honey Bucket” (a memorable brand of port-a-loo) amusing, and promptly threatened to make it my nickname. Luckily, I pawned the moniker off on the beverage I had just mixed — an atrocity involving too much vodka, no ice, and açaí berry jungle juice. I tossed back the concoction and mixed something more palatable as the costume contest began.

The prize for best celebrity look-alike went to a compelling Benicio Del Toro in squinty eyes and raised eyebrows. The procession of red-carpet ladies included Dolly Parton, Catherine Zeta Jones, Hilary Swank, and Marilyn Monroe, but the prized Trader Joe’s gift card went to a woman in an extravagant pink dress who identified herself only as Laurie.

“Give me your Bollywood name and strike a pose,” the emcee instructed the final contestants. A woman in burning red hair bent over backward and the emcee marveled, “Very bendable, indeed! Ah, and we have something very authentic looking here.” A dude in an unassuming Indian outfit stepped forward and exclaimed, “I’m just an onion farmer!” 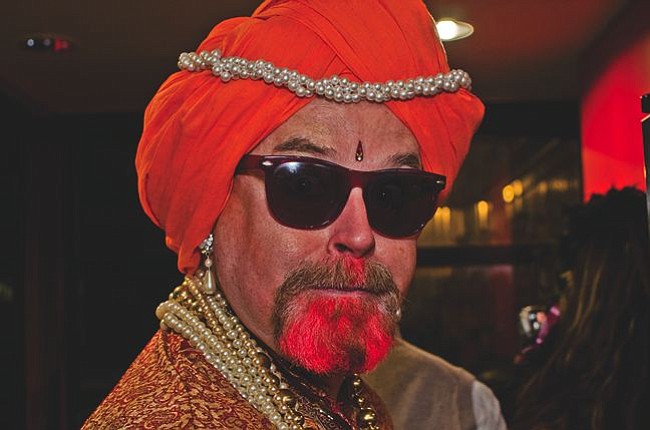 The swami is in.

The swami went next, shuffling his feet in Indian slippers with upturned toe-caps, twisting one hand in the air. “Aha!” the emcee cried. “The screwing-in-a-lightbulb dance!” The applause of the audience ultimately decided the winner. “I’m sorry, but I think the lady calls it!” the emcee declared, indicating a girl in classic Bollywood attire and Princess Jasmine braids.

Like all good parties, the Spaghetti Social drew to an end with ecstatic dance. Out front, an artist sold his work from the hood of a car. He called his style “post 9/11 modern expressionism.” Why? “Because I started painting in 2002. It’s no longer modern.”

Which almost makes sense when you’re several cocktails, a shot of tequila, and a Honey Bucket deep. ■

Hi Josh, This is a fun read! Thanks for the humor. Your room mate's too. I like intellectual humor based on a twisted view of history. Give him my compliments!

FYI Starting March 16th @ 7 p.m. (monthly, 3rd Wednesday) we've moved the poetry series that I host to Upstart Crow Bookstore and Coffee House in Seaport Village. (free parking with min. purchase, like a cup of coffee or a goodie from their deli) We'll have a poet perform with his amazing guitar and original lyrics on that date. And the other poet is a delightful, smart, young woman, and beautiful! I'm sure you know the spot, it's like stepping into San Francisco. Stop by and see us! Hope life is good for you!

On a sad topic, my dad died on Feb. 16th. As you may know, I'd been his main caregiver for the last 5 years and there's a huge empty spot in my life now. I try to keep busy. You can read his eulogy and the poems I read at his service on my website - www.mac.com/serettamartin How's life in your space?

Greetings! On occasion I'm known to Google two things: my name (Mike The Janitor) and the name of my employer (Honey Bucket). Well guess what happened when I just Googled "Honey Bucket"?

It was a good read and fun laugh.

My name, as previously stated, is Mike The Janitor. I'm a former radio personality of 15+ years who now services and maintains portable restrooms for the afore mentioned Honey Bucket.

I work in our Salt Lake City market (my hometown) and always get a laugh from what I do for a career now. And, to be honest, every job has it's fair amount of s**t to deal with on a daily basis.

I invite you to "crash" my website any ol' time at:

Thanks for the mention and I'll be sure to pass it along to our people.

WASN'T THERE A BAND CALLED HONEYBUCKET?