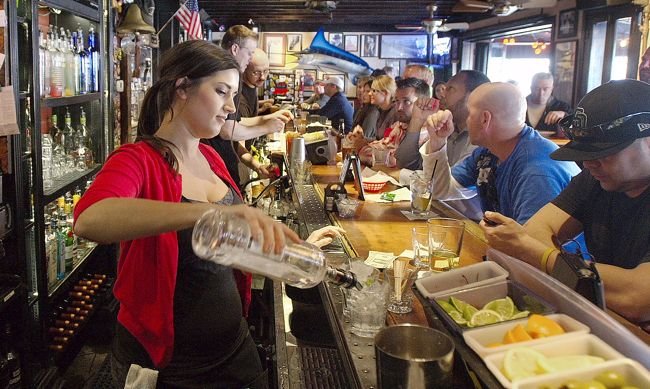 "I’m jonesing to get back down to Panama,” says Jeff.

“‘Jonesing’?” says this old guy who is seated next to me.

Huh. I’d forgotten the word myself. But Jeff, it seems, has set himself up a life in Panama. Runs a bar down there. He’s the type of person you get here in this famous fishermen’s joint...mornings, anyway. For instance, Mike, up at the end of the counter, creates those giant Calcutta cane fishing poles that old-fashioned tuna fishermen use. And the guy next to him, Terry? He used to sail out of Dutch Harbor in Alaska in a Deadliest Catch–type crab-fishing boat. Hey, this is the Waterfront.

I was legging it down Kettner, heading for the Santa Fe train station, when I saw scrawled on a blackboard the words “Breakfast With Tiffany.” Blue-eyed gal’s wiping down a sidewalk table. “You Tiffany?” I ask. “I’m Tiffany,” she says, then adds, “You look like you need breakfast. Come on in!”

“Sure,” she says. “Been serving since six this morning.”

Hard to turn down an invitation like that with a Jackson floating in my pocket. So I came in and hoisted myself up onto a bar stool.

Black rafters and a black ceiling keep it cozy. I lean over the well-worn wood ’n’ Formica counter and look around. First thing you notice is hundreds of black-and-white photos of trawlers and fishermen, ’specially tunamen hauling tuna, three poles together, bent under the weight and fight of one huge albacore. This bar, you can see, has been around. Since 1933, turns out. “San Diego’s Oldest Tavern,” said the sign on the black canopy outside. Meaning, I guess, that it was the first to get a liquor license after Prohibition was repealed.

The guys scattered around the bar look like regulars. “I rode a motorbike down through Mexico,” Jeff’s telling me. “Ended up in Panama. Panama’s it, man. The tops.” He and his buddies run the Dirty Devil Cantina down there.

The Waterfront is where he socializes when he’s up visiting San Diego. Right now he’s sipping a Bud.

“What’s popular, this time of day?”

“Bloody marys,” she says. “In the old days the trawlermen would be done unloading their catch by dawn, and they’d come up here for food and drink. We still have one or two of them come by. Retired now… You decided yet?”

Well, would love a brewski, but unlike the trawlermen of old, I ain’t headed for the sack straight afterward. “Coffee,” I say. “And something to eat.”

“The dishes are named after local fishing boats,” says Tiffany.

And muy sabroso it is. The breadcrumb jacket of the beaten steak stays crispy under the gravy. It’s salty, but not too salty. Plus, Tiffany brings bottles of Cholula, Tapatío, Tabasco, and ketchup to kick it up. I stick the two over-easy eggs atop the English muffins and slice off chunks with a big fat steak knife. Hash browns blot up the places where I’ve dumped too much hot sauce. And cholesterol? I swear I’ll run it off during the day.

One question I gotta ask before I go: Why “Waterfront?”

“Kettner was the waterfront,” says Tiffany. “Then the Navy dredged the bay and dumped the silt right here in front of us. The County Administration Center sits on Navy fill.”

I’m just finishing up when, dammit, I spot a breakfast burger on the menu, a quarter-pounder topped with a fried egg and cheddar cheese and served on an English muffin, with fries or hash browns ($8.50). I coulda had that delish-sounding contender. Plus, all sorts of dishes for lunch and dinner, even at this hour.

“Have the Waterfront Burger next time,” says Jeff.

“All the burgers are great,” Jeff says, almost nostalgically.

“Ever find yourself jonesing for the Waterfront Burger when you’re down in Panama?” I ask.

“No, what I jones for when I’m in Panama is good Mexican food. They don’t have it there. That’s half the reason I come up.” ■