What of Young Teddy Ballgame? 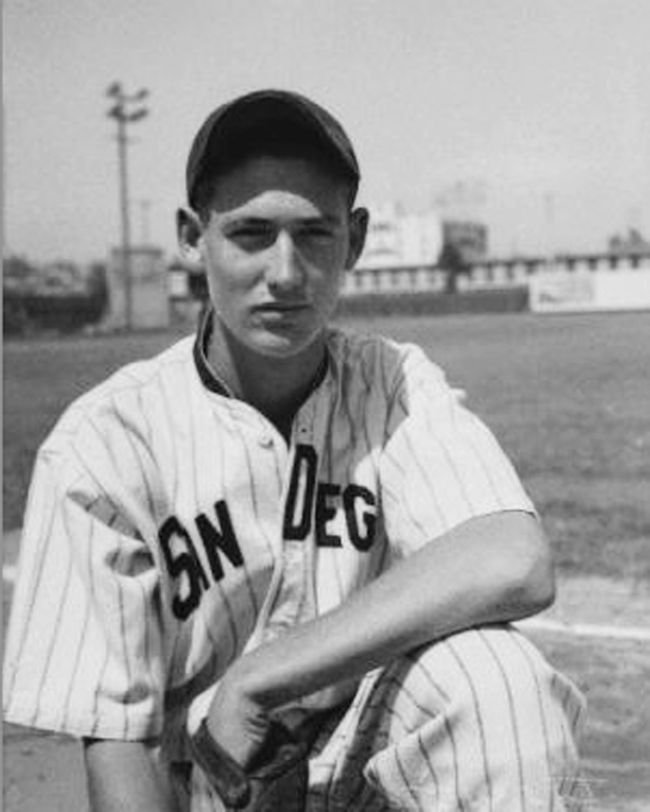 Be it glorious summer — or just after another homegrown baseball talent leaves the Padres for the Red Sox — Ted Williams (1918–2002) remains eternally relevant. “Teddy Ballgame” endures as arguably the greatest achiever among San Diego’s many fine athletes. But what of young Theodore Samuel Williams — who grew up playing hard in North Park — as any part of any SD music scene? He was raised around music — and he did participate in a local band.

Ted’s musical mother, May, born Micaela Venzor of Mexican parents, was a Salvation Army member for 33 years. She played and sang songs of Jesus — and collectied donations year-round — on streets, buses, and in SD and Tijuana bars. Proficient on guitar, banjo, cornet, and piano, she excelled in the Salvation Army band. But Teddy dodged his mom’s enlistment efforts early on.

In fact, in his 2005 book The Kid: Ted Williams in San Diego, editor Bill Nowlin cites “how mortified Ted was at the ribbing he received from schoolmates, who would tease him about being dragged along with his mother when she was on the street with the Salvation Army band.... Ted told Bob Doerr [his teammate on the San Diego Padres in 1936] that when his mother brought him along with the Army band, ‘I used to try to get behind the big bass drum so that I could hide.’”

Ted’s father, Samuel Stuart Williams, was also musical, a U.S. Army trumpeter. And Ted’s nephew Sam Williams is an acclaimed finger-picking folk-singer. While living at the Williams home on Utah Street with his grandmother May — who’d lead sing-alongs on guitar and piano — Sam also played North Park Little League ball. His bio notes he later “became an ‘itinerate musician’...performing at colleges, coffeehouses, and nightspots in California, Oregon, and Washington.” But young Teddy chose baseball over music — or, sometimes, food: investigating his skinniness revealed the elementary schooler was skipping lunch for more hitting practice instead.

Such focused intensity inspired the Baseball Project, a side group including REM’s Peter Buck, Scott McCaughey (Young Fresh Fellows), and Steve Wynn (Dream Syndicate). Their 2008 debut sported a rousing Ted tribute, whose title quotes a salty boast the slugger would make (according to Jim Bouton’s classic baseball memoir Ball Four). As liners note, “Ted Williams would take batting practice and shout ‘I’m Ted Fucking Williams and I’m the greatest hitter in baseball’ before every pitch, sometimes adding, ‘Jesus H Christ himself couldn’t get me out!’”

The whole family is quite musical, either as practitioners or appreciators.

May's sister Sarah and some of her brothers also played. As kids, Sam and I would sometimes stay with Sarah in Santa Barbara, and there was always singing around the piano at night after dinner. Her husband Arnold played in a band too.

Sadly, I've never been able to conquer an instrument, but I do love music and have quite a collection.

Do you by chance know the block #/address on Utah street where the Williams family home was located? It would be cool if Ted's childhood home were still standing-though unlikely.

Oh, yes: the TW boyhood home stands in North Park today, tho no note of Ted once living there can be seen (at least not the last time I drove by). On the one hand, I'm semi-reluctant to give address in def. to privacy of residents - who must get bothered occasionally, etc. - but on the other hand, it's history and an address that's v. easily found - even spelled out in biographies of Ted. Just found this, more insight here: http://baseballblogga.blogspot.com/2009/03/unassuming-house-in-north-park-is.html

BTW, Ted being of 50% Mexican parentage should not go w/o note. He seems to have neither hid nor downplayed his Hispanicity nor particularly celebrated it; and he apparently didn't know Spanish, altho of course he must've heard his mother and her sister/other family members speaking to each other en español. (Remember, his mind was always elsewhere: hitting, hitting, hitting - and then, after retirement, presumably lotsa fishing). Still, tho: Ted W. IS regarded as The First Latino inductee to the Baseball Hall of Fame. Good bar-bet Q., eh? Most who thought they knew A. to that "Who was ...?" would answer, "Roberto Clemente." Incorrect! Cuz it's The [Border Region] Kid ...