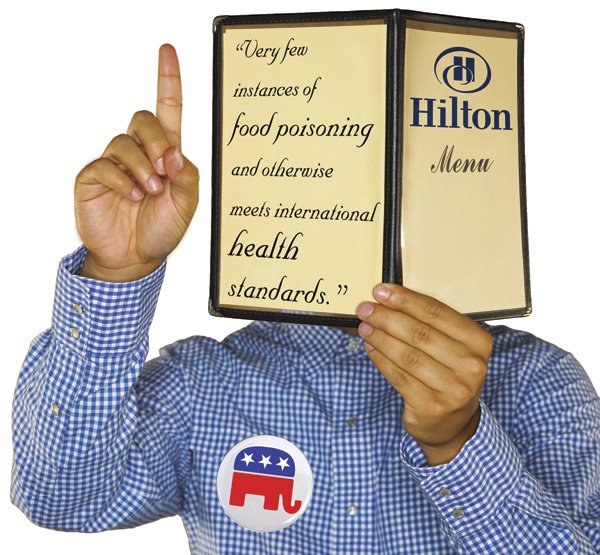 A top aide to GOP congressman Duncan Hunter headed for Africa this spring on a trip paid for by the International Republican Institute, whose board, chaired by Arizona senator John McCain, includes such other Republican stalwarts as Senator Lindsey Graham and Brent Scowcroft, a key national security advisor in the administrations of Nixon, Ford, and both Bushes. Victoria Middleton, Hunter’s chief of staff, received travel expenses of $7999.98, including business class airfare, lodging of $901.21, and meals of $340.55, to be an election observer in Lagos and Abuja, Nigeria, from April 11 through April 18.

According to Middleton’s travel report, the institute “has observed every election in Nigeria since they ended military rule.” Her observation team was housed at the Transcorp Hilton Abuja at a rate of “$376 per night or less.” One reason for choosing the Hilton, the report says, is that “It has very few instances of food poisoning and otherwise meets international health standards.”

The government-funded institute, closely linked to the Republican Party, is controversial in some quarters for its ties to the Central Intelligence Agency and Blackwater USA (now known as Xe). According to an account last year in Norfolk’s Virginian-Pilot, Blackwater had a five-year, no-bid contract to protect the institute’s operations in Iraq. Internal Revenue Service filings by the institute showed that it paid Blackwater $50 million, more than a fifth of the institute’s budget, over a three-year period between October 2005 and September 2008, according to the paper. Eight “democracy building” grants from the State Department to the institute have totaled $131 million since 2004, the paper added.

According to Middleton’s itinerary, upon its arrival in Abuja her delegation received a “Security Overview” from Greystone, which the New York Times reported last September was among 30 “shell companies” that Blackwater set up after the firm ran into controversy in Iraq.

I am a spokesperson for the International Republican Institute. IRI has no ties to the CIA. Those are conspiracy theories made-up by dictators who will do anything to hold on to power and others who are threatened by real democracy. IRI takes seriously the security of its staff and the volunteers who travel with the Institute. I can’t imagine the outcry if IRI abdicated its responsibility for security and as a result a volunteer was killed. You can learn about IRI at www.iri.org.

I'd feel a lot better if the "International Republican Institute" were more connected to the Central Intelligence Agency than to Blackwater, Xe or Greystone -- those now-notorious private firms made up of unaccountable soldiers of fortune who shoot up Iraqi civilians and answer to no civil authority.

Isn't the IRI just a front organization to pay foreign travel tabs for Republican members of Congress? (I'm sure there must be a Dem equivalent that picks up the bill for frequent high-flyer Rep. Susan Davis.)

Oh-oh, when I click on www.iri.org noted above, it says "Server Not Found."