The California Whirlwind, Part One 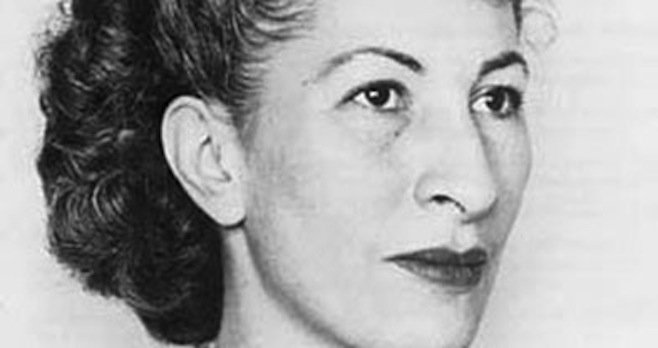 For two decades, Luisa Moreno abandoned her private life and championed the rights of workers. She zigzagged around the country, protesting, organizing, and negotiating for labor unions: garment shops in New York; cigar plants in Tampa; tuna-cannery workers in San Diego. Along with being the first Latina vice president of a union, Moreno helped found the first national civil-rights assembly for Latinos: The Congress of Spanish-Speaking Peoples. “She was one of the most prominent women labor leaders in the United States,” writes Vicki L. Ruiz, “comparable in stature to Mother Jones, Elizabeth Gurley Flynn, and, more recently, Delores Huerta.” 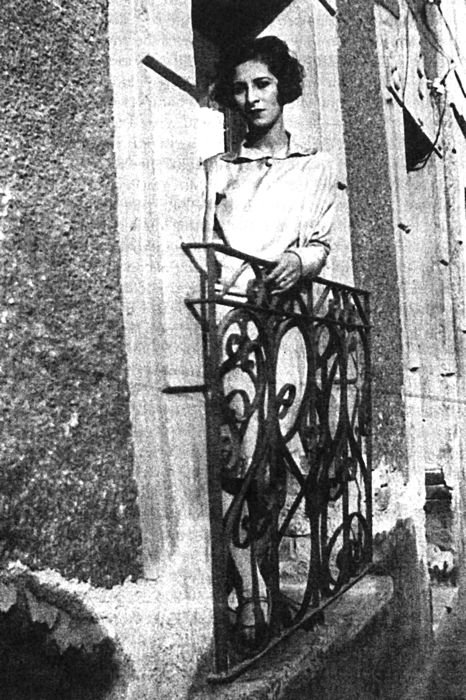 In 1947, Moreno went into semi-retirement. She and her new husband, Gray Bemis, moved to San Diego. At first they had an apartment near the beach. Then, in 1949, Bemis, who managed the Consolidated Pipe & Supply Company, built a small frame house on Medio Drive in Encanto. The red building with white trim and a backyard flush with azaleas stood on a quiet hillside. People called Moreno “the California Whirlwind” for her relentless efforts, but compared to those days, her new home felt as peaceful as a convent. “That house symbolized some of the happiest moments of my life,” she said.

A slogan over the front door: “We are created to serve others. The sad thing is that we die only for ourselves.”

Bemis had a darkroom for photography; Moreno, an office with a view of San Diego Bay. She planned to write a guide to organizing labor unions. An inveterate collector, she kept everything from postcards and personal letters to signed contracts. As she thumbed through her massive files, her life flashing before her eyes, the thought struck her: why not a book about her activities?

One day, while preparing a sandwich in the kitchen, Moreno noticed her gardener Manuel peering through a window into her office, straining to read something: either a manuscript on her table or the titles in her library, such as Lenin’s State and Revolution, M.F. Olgin’s The Struggle Against Imperialist War, and Marx’s Communist Manifesto.

Asked what he was doing, Manuel said he just wanted advice about arranging some plants. An acute reader of people — many said her eyes looked right into you — Moreno stared him down.

Manuel broke: the FBI wanted incriminating evidence on Moreno, he confessed. If he could find any, his relatives would become American citizens.

Manuel also warned her the FBI was questioning neighbors and friends: What car did she drive? Was she living “beyond her means?” Did she read “foreign magazines” or The Daily Worker? At one point an agent asked: “Do you have any reason to suspect that she might not be, you know, 100 percent American?”

Moreno told Manuel to “say whatever it took to protect himself and his family.” She kept him as her gardener.

That night when her husband came home, they decided to destroy anything that might incriminate friends and former associates. They set family photos aside and threw everything else into a back-yard bonfire. “Photos that depicted union groups perished,” wrote Larralde and del Castillo. “Boxes of private papers went up in smoke.” Years later, Moreno regretted the burning, how she’d watched the record of her political life flame, writhe, and curl into thin black ashes.

At her birth in Guatemala City on August 30, 1907, political activism was Moreno’s least likely path. Her father, Ernesto Rodriguez Robles, was a wealthy coffee grower. Her frail, socialite mother Alicia was “a peacock,” Moreno recalled, “who never emerged from her boudoir until 11:00 a.m.” They christened her Blanca Rosa (“white rose”) Lopez Rodriguez. She grew up on a large estate and, until she was eight years old, seemed destined for a life of pampered ease.

Then she caught a fever so fierce her doctor feared she might die. Her father prayed and promised that if she lived, he would “consecrate her to God” — in other words, she would become a nun.

She survived, and Ernesto fulfilled his vow: he enrolled her in the College of Holy Names (a junior high/high school for girls) in Oakland, California. She lasted four-and-a-half years and learned more about discrimination than the religious life. When a classmate muttered the phrase “Spanish pigs,” Moreno recalls, “I belted her.”

When she came home, she could add English to the Spanish and French she spoke fluently. Although, if she wanted, she was set for life, Moreno began writing poetry and sought to further her education. But the University of Guatemala refused to accept women. Instinctively, Moreno organized a group of upper-class social debs. They became the Gabriela Mistral Society (after the Chilean poet and Nobel Prize winner). The women canvassed the city. They petitioned and lobbied with such fervor that the university opened its doors to women and, many years later, gave poet Mistral an honorary degree.

Moreno could have been first to enroll but didn’t. “Rejecting her family’s wealth, and no doubt the constrained expectations it entailed,” writes Ruiz, Romero ran away to Mexico City. By age 19, she was writing society snippets, a children’s column for a newspaper, and poetry on the side. She became a “flapper” and joined the avant-garde along with Diego Rivera and Frida Kahlo.

A year later, she fell in love with a “man of mystery.” A Guatemalan artist who drew caricatures, 36-year-old Miguel Angel de León had served in the French Foreign Legion and fought in World War I. Moreno would never forget their wedding night: “He took me to a horrible hotel [and] said he had business — womanizing! I cried myself to sleep.”

Somehow, they stayed together and sailed to New York, arriving August 28, 1928. That November, Moreno gave birth to her only daughter, Mytyl Lorraine, who would be, Moreno boasted, “a Latin in Manhattan.”

But New York was a shock. Instead of living a bohemian life, they discovered what Spanish poet Federico García Lorca did a year later: for Latinos, “Those that go out early know in their bones / there will be no paradise or loves that bloom and die: / they know they will be mired in numbers and laws, / in mindless games, in fruitless labors.”

To support her child and unemployed husband, Moreno worked in a garment factory near Spanish Harlem. Behind locked doors and boarded-up windows, she and Latina coworkers sewed and pressed clothing in sweatshop conditions: less than minimum wage, no overtime or benefits, filthy toilets. After 15 hours on the job, some women took their work home to complete the day’s tasks. Also known as “outwork,” cynical supervisors labeled it “tenement-house manufacture.”

One of the workers invited Moreno to see her baby. The incident, Moreno recalled, became “the defining moment of my life.”

As they walked up the crowded tenement stairs, a baby wailed. They ran to the woman’s apartment and saw her child: a mass of blood on the floor. A rat had chewed off half its face.

Moreno “did not know quite what to do,” writes Ruiz, but “knew she had to do something to change the material conditions of her fellow workers.” She decided to become a political activist.

“An absentee mother by circumstance and choice,” continues Ruiz, she also “found her radicalism an escape from a disintegrating marriage.” Her husband spent much of her earnings at a saloon, where he propped Mytyl on the next stool. Often, he left without her. Mytyl recalled having to cross wide streets, streetcars blaring, by herself.

In 1930, Moreno participated in her first strike. Zelgreen’s Cafeteria, in New York City, exploited its workers with long hours, constant sexual harassment, and the threat, should anyone object, of dismissal. The attitude: this was the Depression; they were lucky to have jobs.

Hearing that workers would picket the cafeteria, police formed a line on the sidewalk that allowed customers to pass through. A woman approached (Moreno). No more than five feet tall in high heels, her hair meticulously in place, she wore a fur coat — and a stern, patrician air — and looked determined to have a meal inside.

The police let her pass through, perhaps tipping their hats to such dignity. When Moreno reached the front door, she spun around, yanked a sign from her coat, and held it high. “Strike!” they say she shouted.

For an instant, she was a one-person picket line, blocking the entrance. Then policemen grabbed each elbow and hauled her down the street. When she emerged from an entrance next door, they had bloodied her face. Years later, Moreno said she was lucky she wasn’t disfigured.

Not long after, she joined the Communist Party. With very little money or outside help, she organized coworkers into La Liga de Costureras, the League of Seamstresses.

For the next four years, under the tutelage of labor leader Ernesto Galarza, she rose from “junior organizer” to a front-line activist. Galarza: “She knew how to adapt herself to everyone else and how to handle her opponents. She knew how emotions could taint everything, and she cherished the value of being consistent.”

To those who knew her, Moreno seemed two people. The public person spoke with passionate conviction. But in private she was inward, controlled, and impeccably dressed. Bert Corona, labor organizer, remembered: “Even if you knocked on her door at 8:00 in the morning, you’d find her well put together.... She was always proper and rarely complained.”

The public Moreno encountered “double discrimination” — as a woman and a Latina — from local, male-dominated unions.

During this time she met Gray Bemis, a soft-spoken New York cabbie and activist originally from Nebraska. They kept running into each other at meetings and became friends, then good friends. But Moreno wanted no more: “I liked him, but he was married.... Although I was in a miserable marriage, I do not fool around with married men.”

Throughout her life, Moreno made sudden, complete breaks from her past. In 1935, she severed more ties. She left her abusive husband. (They divorced in 1937.) She quit the Communist Party, she told an interviewer, “because of ideological disputes” (or racial, as Bert Corona speculated: the left and the Communist Party defended “only labor leaders…of European descent and not Latinos”). And she left New York. She took Mytyl on a bus to Florida, where she would organize workers for the American Federation of Labor.

She also changed her name. Until then, she had been Rosa Rodriguez-Lopez, then Rosa de León. In Florida she became “Luisa Moreno.” Some say she identified with Luisa Capetillo, the Puerto Rican organizer; others, with Mexican activist Luis Moreno.

“With her light skin, education, and unaccented English,” writes Ruiz, “she could have ‘passed.’ Instead, she chose to forego any potential privileges based on race, class, or color.” The name also reflects this choice: where once she was “Blanca Rosa” (white rose), now, writes Ruiz, “she chose the alias ‘Moreno’ (dark).”

In the years to come, “Luisa Moreno” became an internationally recognized activist. But as her achievements and reputation grew, so did the forces determined to bring her down. ■

unfortunately, many of us still find ourselves in 'mindless labor' and are told to be glad we actually have employment. so much has changed and it's all stayed the same.

this was uber inspirational! thanks!

Wonderful story about an incredible woman. Thank you! On to Part II!