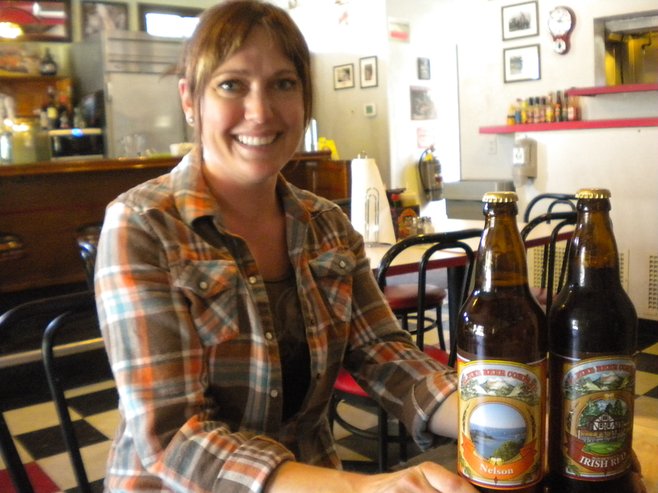 They sit in a row: Bad Boy, Duet, Odin’s Raven.

I know the one I want. The black one. Odin’s Raven. I can see Bill’s hand twitching in that direction, too.

The three of us are up in Alpine. Tomorrow, Bill and Marjorie are flying home to Alaska. I wanted to give them something to remember before they hit that far-north, don’t-blink-before-it’s-gone summer.

We’re driving in the mountains. Okay, Bill is driving. Rental car. I’d told him and Marjorie about this Shangri-la for beer lovers. We cruise up Alpine Boulevard, me searching for this brew-pub I’d heard about. Ah…

We swing across Alpine Boulevard and park. It’s a long, low, white-painted brick building with a shingled roof and a canvas sign in the bay window — “Alpine Beer Company.” This is where Pat McIlhenney, a retired fireman, has been making craft beers and winning the World Beer Cup again and again. Putting Alpine on the map. You go through a modest little wooden door into a full pub, with a bar, a bunch of tables, and a row of black booths. It looks new. White walls and bright-red air ducts snaking around under the roof. But old, too, with brick walls (brown in here) and dark wooden rafters.

“This used to be a drugstore with a soda fountain,” says the server, Danielle. “Goes back to 1939.” She’s brought us menus. Most everything seems to be $7.95, except for “dinner plates.” Those top out at $23.95 for a full rack of pork ribs with two large sides. But first, drinkies.

We scan lists on the wall, looking more like a bookie’s board at Caliente racetrack. Even the brews sound like horses’ names: Willy Vanilly, Apricot Nectar, Duet, Bad Boy, Alpine Ale, Odin’s Raven. I asked about the Duet.

“It’s a single IPA with double hops, Simcoe and Amarillo,” Danielle says. “They give a floral finish with pine aromas. The hops add bitterness, but it’s not overbearing.” The Bad Boy? “A double IPA with all-English Maris Otter malts, and Columbus, Amarillo, and Citra hops, dry-hopped…”

This gal is a walking encyclopedia. We pick three small glasses ($2.50 each), ’cause Bill’s gotta drive. She brings them out, points to the last, Odin’s Raven Russian Imperial Stout. “This was created by Shawn, Pat’s son, and the man I…” She blushes. “He created this stout. He puts in Hershey’s chocolate syrup, along with chocolate malt, agave syrup, brown sugar, molasses. It’s big — 11 percent alcohol, chocolatey, roasty.”

So who gets what? “Let’s just share them,” says Marjorie. She reaches for the Odin’s Raven. “Oh, my goodness. This is beautiful.” She puts the glass down. I’d have grabbed it, except I’d been smelling the Duet. Smelling it. It has such a fruity, lemony aroma.

The appetizers look, well, appetizing. Barbecue nachos with pork, beef, or chicken, and cheese and jalapeños and barbecue sauce is $7.95. Crispy fried pickles — is this a great idea, or what? — are $5.95. A Brewer’s Plate of sausage, peppers, two cheeses, fruit, and crackers is $7.95.

That’s when the chef comes up. “We’re a barbecue brew-pub, not pizza, like most brew places,” he says. Turns out they make my favorite sauce: Memphis-style. But not too much of it. “We dry-rub in Memphis,” he says. “We don’t marinate. We want you to taste the actual meat.”

And the flavor of Memphis sauce?

“It’s sweeter than, say, North Carolina,” he says. “They like it vinegary. You might say there’s a ‘sweet belt’ running between Kansas City and Memphis.”

So, basically, we’re talking those appetizers, salads (like the Southwest, with corn, beans, cheese, tomato, avocado, $6.95), sandwiches, and dinner plates. We decide to stick to sandwiches. 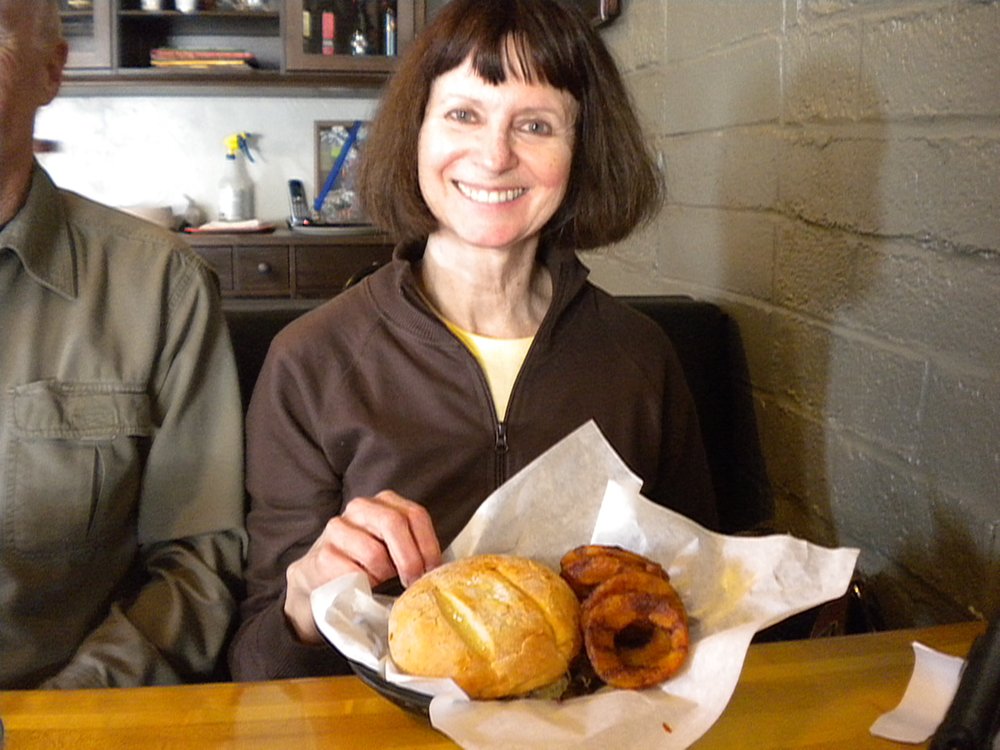 Marjorie, showing off her sandwich (it’s called “the best pulled pork under the bun”)

Bill gets the brisket with sautéed beans as a side, Marjorie gets the pulled pork and onion rings. I hate having the same thing as someone else, so I go for the spicy chicken-sausage sandwich, with breaded beans, just to see what they are. Turns out that the sausage is surprisingly flavorful; at the last moment it kicks you with peppery heat. Duet mellows that out like a kind hand on the shoulder. We end up passing ’round the food, the same way we’re sipping from all the glasses. Brisket’s great, but that sweet pulled pork and the Odin’s Raven dark brewski are one fab combination. ’Course, it’s 11 percent, so it’s only right that Marjorie and I glug the lion’s share.

Bill isn’t bitter. “I have to say, this food is exceptional. We’re taking a bottle of that Odin’s Raven back with us to the cabin.” ■ 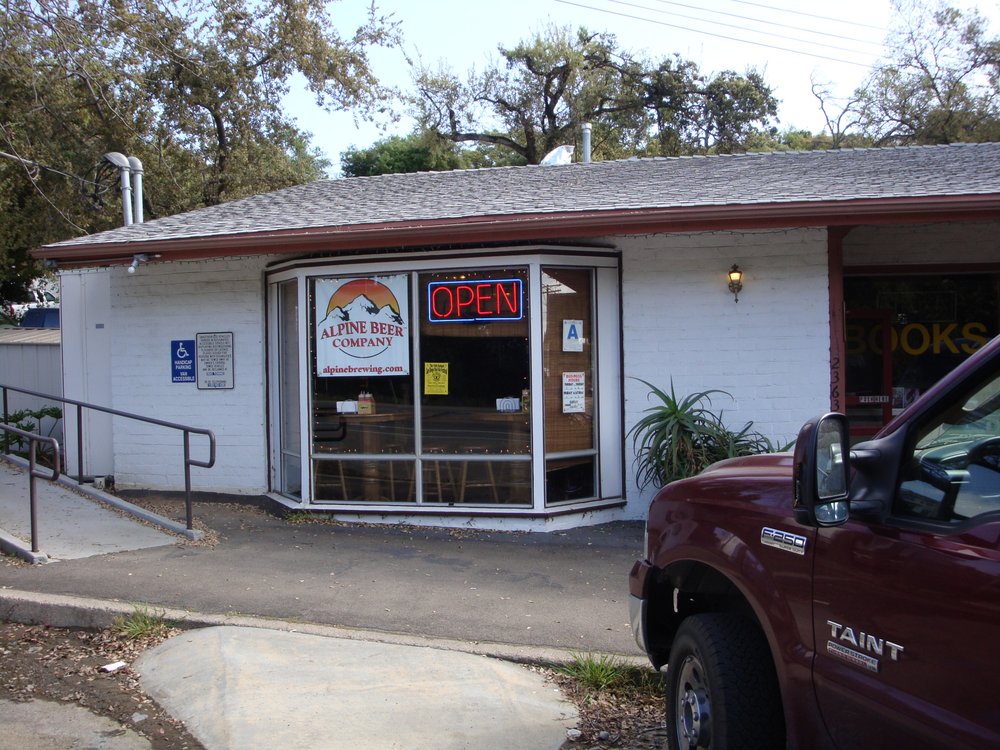 You’d never know it, but this is the pub section of Alpine’s brewery

Food's fantastic, the best beer anywhere, and Danielle and Shawn are the nicest folks you could ever meet.