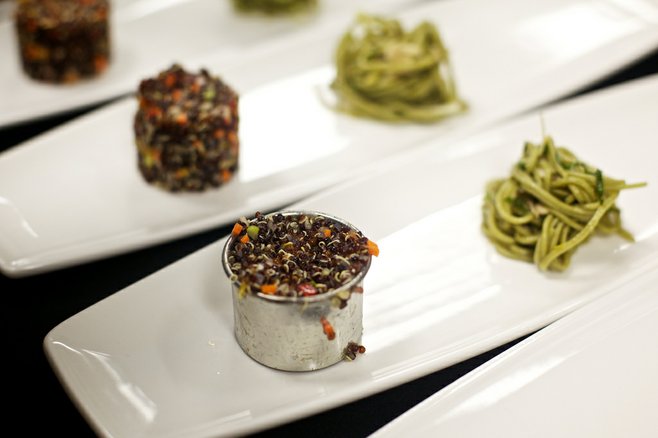 I am a Car3 — a Card Carrying Carnivore! I love the supple, greasy squish of tender, gastronomically compromised muscle tissue yielding beneath my molars. I enjoy the tart, grassy zing of goats’-milk chèvre, and the rich coating of butteriness that a high dairy fat content lends to gelato. The way I see it, I could live without these things…but why?

That said, I harbor sincere respect for those who believe humankind should recuse itself of rights afforded those at the top of the food chain. These are noble individuals with strong ideals who, in many cases, suffer a lower quality of life due to a stalwart commitment to their beliefs.

I’ve come up for air in the midst of a duck fat–laden ultra-nosh at a restaurant just as a patron at a neighboring table inquired about vegan options. The answer is usually akin to “I can have the chef steam some vegetables for you.” I might meet my end at the hands of cholesterol, but such tear-worthy responses make me want to keel over on the spot. The truth is, there are few options at mainstream restaurants for vegetarians, let alone vegans, and many of these are subpar.

This was definitely not the case at a recent vegan beer dinner I attended at Escondido’s Stone Brewing World Bistro and Gardens. This dinner was the latest installment of the eatery’s Master Pairings Series, in which executive chef Alex Carballo creates a themed dinner menu where each course is paired with one or several beers by renowned cicerone (beer sommelier) Bill Sysak. Having never consciously eaten a vegan dish, much less a multi-course banquet, I was as interested to check out the dishes chef Carballo was fixing as the exceptional brews I knew “Dr. Bill” would have on hand. The latter did not disappoint. More surprisingly, neither did the former.

The meal started with three Asian-inspired amuse-sized offerings: a black quinoa salad rife with bright sweetness from fresh mandarin oranges (an homage to tabouleh, Carballo’s favorite snack); a sushi-style roll with rice-encased tempura avocado and enoki mushrooms, and green-tea soba noodles almost creamy in consistency and beautifully matched with the tenderness of accompanying plump maitake mushrooms. The trio found varying but overall successful levels of harmony with a pair of Belgian-inspired beers — Dernière Volonté, from Montréal’s Dieu du Ciel, a floral saison with hints of pepper that segued perfectly from the noodles and back; and Spice of Life, from Vista’s Iron Fist Brewing Company, a spiced ale brewed with coriander, mace, grains of paradise, and orange peel that matched the citrus and spice of the mirin ginger vinaigrette in the quinoa salad. 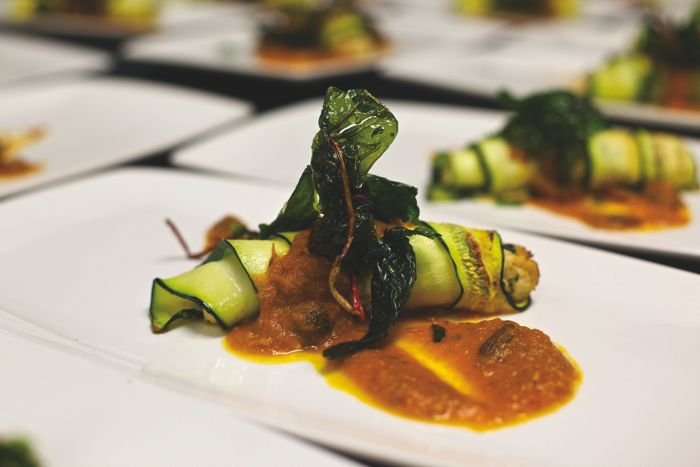 Perhaps the best dish of the evening followed, a cannelloni that used thin-sliced zucchini in lieu of pasta to sheath a house-made soy ricotta cheese that was more flavorful than most varieties available in our region. This simple yet creative dish was made even tastier thanks to the addition of crispy fried spinach and a sweet heirloom ragout featuring one of spring’s greatest delicacies, morel mushrooms. It was a nice preview of the type of fare that’s likely to come when the brewing company’s newest venture, Stone Farms, is fully in bloom and operational.

Stone recently took over land tended by La Milpa Organica and they’re planting seeds for produce for the bistro, as well as for an upcoming second bistro in Liberty Station.

A mammoth poblano chili stuffed with tempeh and sweet potatoes then fried using the same batter that graces Stone’s much-loved Arrogant Bastard onion rings was paired unexpectedly with the sweet and highly alcoholic Malheur 12, plus a cantaloupe-based dessert featuring an icy Evolution Fast Food, Banker’s Hill; this was best matched up with Bailleux Cuvée des Jonquilles, a saison brewed with daffodils. All in all, it was a solid meal, vegan or not.

Food aside, one of the best things about the dinner was having a chance to converse with so many vegans and vegetarians. Just like carnivores (or a herd of herbivorian brontosauri), they tend to stick together, so I rarely have the benefit of their perspective for broadening my own edible worldview. Between getting the scoop on how long they’d been abstaining from some of my favorite things (in many cases well over a decade), and confirming once and for all that tofurkey is one of man’s worst creations, I asked for opinions on the meal. Each one considered it the best vegan bill of fare they’d come across in San Diego. Even if it was the beer talking, that’s high praise, and while this was a one-time-only event, the bistro features a special Meatless Monday menu each week with various veggie vittles, including an avocado taco that earned rave reviews from one of my tablemates.

For other vegans who like suds-accompanied offerings that meet their dietary requirements, there’s an organization that’s putting on pairings throughout San Diego County on a consistent basis. It’s called LoveLikeBeer, and their aim is to give vegans what they want while giving to charities — like the International Rescue Committee, a nonprofit that helps local refugees displaced from their homelands — what they need. That particular charity benefited from a vegan beer-pairing event at North Park’s Sea Rocket Bistro on May 12, where numerous dishes were matched with specialty beers such as a from-cask Stone Ruination IPA dry-hopped with citra hops.

This is a review? Where is Naomi Wise? She's the star of the Reader and you're replacing here with this guy? What a shame. Bring back Naomi, the best restaurant critic in San Diego.

Duckbutter the urban definition, crusty exudate found between the anus and the scrotum.

I wish these food guys would stop talking about duck fat. It incites my poor impulse control.