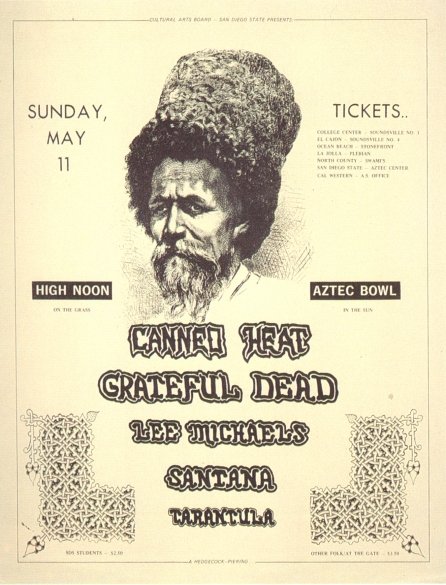 “Rock and roll didn’t officially come to San Diego State University until the Buffalo Springfield concert in 1968. That was the first show that was actually called a rock and roll concert.” Jamie Lennox, 28, an SDSU archaeologist, is writing a book about the history of all of the music ever performed at SDSU. “My bosses are working on a book about history and archaeology at SDSU, and me being the resident music geek, the director said that I could research the music.”

Lennox works in the Tactical Information Center under the chair of SDSU’s Archaeology Department. “It was originally supposed to be a two-page spread in their book, but when I came back with my findings, they realized that this is something bigger.”

Lennox says that in the beginning, campus concerts were produced by students for students. One of the earliest outside promoters to tap into the ticket-buying goldmine that was SDSU’s student body was 22-year-old Roger Hedgecock, a future mayor of San Diego. Months before the Woodstock appearance that would make Santana a household name, he booked the band into the Aztec Bowl (site of the Viejas Arena) in 1969 in what was the band’s first local gig. The May 11 concert also featured Lee Michaels, Canned Heat, and the Grateful Dead.

Aztec Center, being razed as of this writing, housed two smaller indoor venues: Montezuma Hall, capacity 1000, and the 250-capacity Backdoor. “Aztec Center was important to the San Diego punk movement of the 1970s, especially when the [hometown] Penetrators opened for the Ramones in 1978,” says Lennox. The Ramones played at SDSU on seven different occasions between 1977 and 1990. During a 1980 show, Lennox says, “the crowd rushed the stage and actually caused it to move, band and all, and moshing caused structural damage to Montezuma Hall. The Associated Students tried to ban future punk concerts. They were unsuccessful.” Lennox is still in the research process and asks that anyone with SDSU concert memories, photos, set lists, or memorabilia contact her at [email protected].

Jerry Garcia performed "Morning Dew," and Ron "Pigpen" McKernan (four years before he died) sang lead on a 20-minute version of "Hard to Handle." Pigpen also fronted the band for "Good Lovin'," "Good Morning Little Schoolgirl," and "Turn on Your Love Light," the last highlighted by a jam with Santana's percussionists and singer.

One of Spring Fling's promoters was future mayor Roger Hedgecock, who at the time aspired to create a local concert scene similar to San Francisco's. "There was a lot of opposition from the city," he recalled in a 1980 interview with Kicks Magazine. "But all the predictions of total chaos and calamity did not come true."

Hedgecock recruited the local chapter of the Hell's Angels to provide security, sealing the deal with a complimentary case of Jack Daniel's. "I got a note back from them thanking me for the case," according to Hedgecock. "They drank it all at one party."

Space was provided for arts-and-crafts exhibits, as well as a booth for the city's brand-new free clinic. "Even the Black Panthers had a booth," said Hedgecock. Much of the show was aired live on KPRI-FM, and tapes of the broadcast still circulate among tie-dyed and squinty-eyed Deadhead collectors.

Frank Zappa and the Mothers played SDSU's Peterson Gym on October 4, 1970. This newly-formed Mothers featured former Turtles singers Mark Volman and Howard Kaylan, billed as “The Phlorescent Leech and Eddie,” or Flo and Eddie, due to Turtles-related litigation.

Before showtime, many in the audience were talking about Janis Joplin’s death earlier that Sunday. Hard rock trio Head Over Heels opened, having been brought down from L.A. and paid by Zappa himself. Few in San Diego had heard the new Mothers, whose recorded debut on the Chunga’s Revenge album was still two weeks away, so anticipation was high when Zappa finally took the stage and announced “Hi there, boys and girls!”

Wearing tye-dyed jeans and a purple t-shirt, Zappa told the audience “I went to Grossmont High and Mission Bay High. You can see how much good it’s done for me.” Among the reported set highlights was a lengthy excerpt from the operatic 200 Motels, which had been performed and recorded with a symphony orchestra that summer but was thus-far unreleased. “Definitely x-rated material,” Zappa warned the crowd beforehand. “Anyone who will be offended should leave now.”

The set closed with the Turtles’ “Happy Together,” resulting in a standing ovation and a lengthy encore of “Who Are the Brain Police” (a song that inspired the name of the popular psychedelic San Diego band, the Brain Police).

A subsequent review in the San Diego Onion complained of Zappa’s guitar solos; “He seems to deceive himself sometimes into thinking he’s Eric Clapton or somebody and, really, he isn’t.” The Daily Aztec gave a more glowing review, though it was noted that Zappa “played for an audience a good third of which was too spaced out to perceive it as anything but ‘weird’ sounds.”

Frank Zappa introduced me to normalcy of deviance.

I saw the Ramones play the December 15, 1978 Montezuma Hall show. The band was still breaking in "Marky," fresh from Richard Hell and the Voidoids. That night, they played "Rockaway Beach," "Sheena Is a Punk Rocker," and "Now I Wanna Sniff Some Glue," which Joey introduced as "the one that got us banned in Sweden" (true).

My friend Joe and I were collecting autographs after the show when a guy I later deduced to be Ed Stasium (producer and sometime band guitarist) came up and announced the band's van wouldn't start and the equipment trucks had already left for L.A. Joe piped in that he had a pickup truck, and, the next thing we knew, we were driving north with four Ramones and manager Danny Fields in the truck bed. The band was due to shoot scenes the next day for Rock 'n' Roll High School at the abandoned Mount Carmel High in Watts.

When the Ramones returned to town to play Montezuma Hall 10-31-79, they squeezed in a visit to the zoo, where they posed for a photo spread that ran a few weeks later in the short-lived local music magazine Kicks. Photos from that shoot can be viewed at http://www.sandiegoreader.com/weblogs...

I was just corresponding with local promoter Carey Driscoll, and he mentioned something Jamie Lennox may find useful:

"I wonder if Ms. Lennox has been in touch with Jack Tempchin, who ran or at least was one of those who ran the Backdoor for some number of years? I'm sure he'd have tons of memories relevant to her research."

Great article! It's fun to read about the history and memories of a genre that is sadly a dying breed, now that pop music pollutes the radio air waves.

I'm pretty sure she works at the South Coastal Information Center though.

I was the co-chair of the music committee on cultural arts board, when i went to SDSU from 76-78.I have so many great memories of all the shows.

we booked all the concerts,lectures and films and montezuma hall. And I worked part time at the Backdoor the back door Shows included Tom Waits, Patti Smith, jimmy Buffet and the Flying Burrito Brothers to name a few.

i still have a lot of the posters, which i'll have to dig up

we also booked the re-opening of the Aztec Bowl in 1978 that included warren Zevon, who was so drunk he fell off his piano stool and the unforgettable Bob Marley, just 3 short years before his death....

Ironically, I'm going to the 40 year reunion of the Buffalo springfield this weekend up at the Wiltern theatre in LA.

i'd love to chat more with jamie ... how do i get in touch with her.