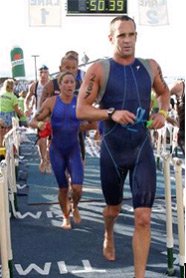 So, last week, the Box introduced Monarch School, a kindergarten-through-12th-grade public/private school (don’t ask) for homeless children and children affected by homelessness, located in downtown San Diego. This is the outfit Blair Cannon, aka swimmer guy, chose as recipient for a goodly piece of the $210,000 he hopes to raise by way of swimming the San Pedro Channel.

Cannon is 6'2", 225 pounds. He has short black hair and is clean shaven. Happily, both attributes highlight a permanent half smile. Everything is packaged in a post-collegiate, pre-middle-age, married man’s body — serious athlete’s section. He’s vice president of Bernstein Global Wealth Management in San Diego. Hey, the lad’s got to work somewhere.

Cannon is planning on swimming from Catalina Island to the mainland, 21 miles. His swim begins at midnight August 5, and ends 9 to 14 hours later, one hopes. The idea is to raise $10,000 per water mile, washing up on the Rancho Palos Verdes beachhead with $210,000 in his charity moneybag. Whilst swimming he’s not allowed to wear a wetsuit or “make supporting contact with any person or object.”

I’ll let Blair take it from here on. We’ll start with the first time school and man met.

“Five years ago, back to my time at GE Capital. We used to do shopping days at Monarch School. They have shopping days for certain grades on certain days. There are truckloads of donated clothes, but they’re not sorted through. We volunteered to sort through clothes and help kids find things their size.

“I’ve known some of the [Monarch School] board members for some time and have received updates as to the progression of the school. I was looking for a way to make a more significant contribution.

“I’ve been swimming since the age of five. Competed all the way through college. After college, most of my swimming was centered around Iron Man Triathlons. I did get the benefit of competing twice in the Iron Man World Championships in Hawaii. That was 2003 and 2004.

“I wanted to take on a new challenge, hence the idea to swim across the channel. I wanted to do it for a cause and wanted to make sure I made an impact on the community.

“My coach is Anne Cleveland. I’ve swum with her off and on over the years and we’ve trained together. She was the oldest person to have completed a double crossing of the English Channel. She was just inducted into the International Marathon Swimming Hall of Fame. So, when I thought I might want to take on the goal of crossing the channel, the first person I called was Anne.

“My longest swim is 11 miles — I’ll probably swim as far as 13 or 14 miles in a single day. I’ve been training in the ocean, predominately in the La Jolla cove, swimming, on average, 25 to 30 miles per week for the last three months. I started in February at 15 miles a week and progressed.

“I have to be able to endure cold water for extended periods of time. Water is warmer now, about 69 degrees Fahrenheit on the coast, but a month ago it was 58. The key is to keep generating body heat. If you do that, it’s okay.

“I’ve been focusing on getting used to being in the water for four of five-plus hours at a time. It’s important. Training on a consistent basis is equally as important. As an example, I swam eight miles on Monday, five miles on Tuesday, and five miles on Wednesday. So, there’s 18 miles over a condensed three-day period.

“There are a variety of ways to prepare the body for a channel swim. Some of it is long workouts, and some of it is having shorter, more consistent training.

“The winds, typically, pick up around 10 or 11 o’clock. Heat generates wind and wind generates chop and swells. The idea is to finish before I’m faced with more adverse conditions. So, if you back up from 10 or 11 o’clock, mid-morning, and it’s going to take me 9 to 14 hours, I’ll probably get more favorable conditions starting at midnight.

“I’ve hired an escort boat. They have experience getting swimmers across the channel. Every other day of the week it’s a fishing boat. They can give me food and water, but it has to be tossed to me. I’ll have a kayaker in the water next to me. That kayaker will have glow sticks on him so I’ll be able to see where he is. It will be pitch dark out there.”

For readers wishing to donate money, do good, and feel good about yourself for the rest of the day, kindly hie thee to: monarchschools.org/secure/catalina.php.