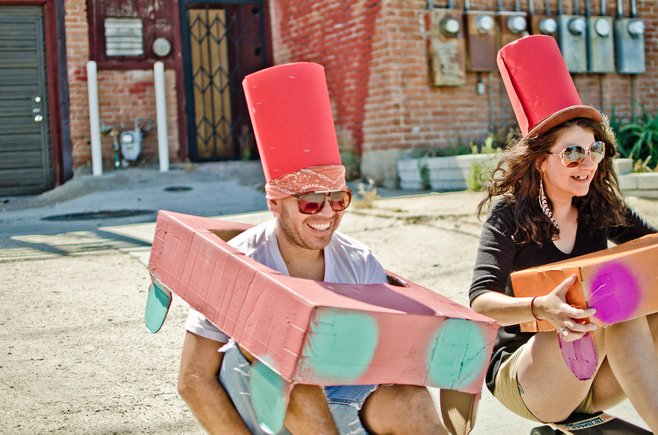 My roommate Eli’s birthday falls on the same day as the Cremation of Care ritual at the annual elite getaway in Bohemian Grove, where politicians, bankers, and reptilian overlords spend two weeks pissing on old growth redwood trees and sacrificing pork-skin baby replicas to an ancient Semitic deity. In celebration, we threw Brohemian Grove — an urban alternative for just us regular bros.

Bobbi Koller, whose yarn art is on display downtown this month at Hostelling International San Diego, converted the hallway into a forest with yarn, push pins, and streamers. Esoteric symbols adorned the walls. Guests were advised to sacrifice a splash of each beverage to Broloch, the tribally tattooed owl god in stunna shades and popped collar, who was affixed to the front of a bucket. The plan was to drink the rude concoction when the kegs ran dry.

We kicked off the afternoon with Shriner car races. The rules were simple: be the first to make it down the University Heights alleyway seated on a skateboard with your car and red hat intact and you win, but the reality proved complicated. Partiers and passers-by from the Pride parade fell off their boards and busted the seams on their cardboard cars. Hats flew off the heads of would-be victors moments before crossing the finish line. I even took a huge splinter to the glute from my old-school skate deck, somehow still managing to come out in the lead.

Riding the mojo of a just-past-full moon, we finished the first of two kegs well before cocktail hour. The bag of wine hanging from a tree in the backyard was quickly emptied and someone (I suspect neighborhood cat Dr. Sugarbear Phillips) had replaced the “Baby’s Blood” tag with “Crip Juice.”

“I went to L.A. to see Lil Wayne and came back with a food cart,” explained guitarist E.J. of goth-wave band DUDES. He served hotdogs and vegan Dr. Pepper chili in the backyard as psychedelic beat maestros HM.T DM.T and Nino Seneris dished out live electronic jams in the garage.

The conversation settled on “planking,” an internet sensation which involves posting pictures of people lying facedown in public with their arms to their sides. Someone mentioned “owling,” a similar though vastly more relevant meme in which the participant perches like an owl in odd locations.

“The new thing is ‘coning,’” said Matt, who prints an open-submission zine called the Radvocate. “People film themselves at a drive-thru getting an ice cream cone, except they grab the ice cream instead of the cone and let it smoosh through their fingers.”

After sunset, San Diego’s premiere tropicalia math-lounge duo Innerds dispensed weird noise in the garage amid glowing projections of wormholes. I spent the better part of their set wrangling a friend who’d had a bit too much sacrament and had reverted to a belligerent, heedless wiggle.

“We have an idea of what we are going to do,” said Jon, tubist in tuba/vocal dragcore duo Aquapuke. “A few themes, but we might get tired of a song halfway through or spend a lot of time improvising on the transitions.”

In fishnets and high heels, Aquapuke filled the garage with eerie sound as cigarette smoke snaked through the projector light. By the time DUDES played, around 10:45, the kegs were gone and partiers began forming coalitions to chip in on cases of beer. The cops came and people trickled out until only a few stragglers and an owling Broloch full of booze and cigarette butts remained. ■